'Nation to Nation'? Indigenous people and the Trudeau government

"The intent of the Trudeau government's National Termination Policy Framework (White Paper 2.0) is to fiscally coerce Indigenous Peoples to consent to Termination of collective rights of Indigenous Nations, Band by Band so the provinces have clear jurisdiction and title to lands, territories and resources."

A group of First Nations in Manitoba says the Cuban government has offered to provide health-care resources for communities in need.

Grand Chief Jerry Daniels of the Southern Chiefs Organization made the announcement at a media conference Friday in Havana, where a delegation of Manitoba First Nations leaders and health technicians have spent the past week discussing a potential partnership with the communist nation.

Cuba has a program where it will send a number of trained health professionals to work in other countries, according to Daniels.

"Our nations are in the middle of a health transformation process … however we all agree on one thing: we need way more health-care professional providers," said Daniels.....

The first-time MP, whose election platform centred on Nunavut's housing crisis, is currently touring communities in the territory to collect photos and stories from residents about their living conditions.

She says she's met people living in overcrowded homes that are falling apart and reek of mould, and heard stories about homes that get so cold that the beds freeze to the wall.

"Violence, abuse, deaths, mental health — I don't think that we can start addressing those things until there is adequate housing and people are not living in overcrowded homes and mouldy homes," Qaqqaq told As It Happens guest host Helen Mann.

"We're talking about a basic human right, and we need to start from there."

As of October 2019, around 5,000 people in Nunavut were waiting for public housing, and about half of Nunavut's 38,000 residents lived in overcrowded homes.

In August 2019, Prime Minister Justin Trudeau visited Iqaluit to announce $290 million over eight years to build housing in the territory.

However, the announcement was a re-hashing of two previous funding commitments — $240 million earmarked in 2017 for a national housing strategy, and another $50 million from the Canada-wide Investing in Affordable Housing initiative. The most recent budget contained no new money for housing.

"The amount of maintenance that is needed throughout the territory, the homes that already are totally mould-infested that need repairs, it's not even enough to keep up with what is currently here. And we already know that housing is a dire need," Qaqqaq said.

Qaqqaq has toured parts of the Kitikmeot and Kivalliq regions of Nunavut in the hopes of bringing greater attention to the housing crisis. She spoke to As It Happens on Wednesday from Rankin Inlet, and next plans to visit Baker Lake before heading to Ottawa next week.

"I've been describing it as mould boxes, basically. Some homes, before you even enter, you can smell the mould," she said.

"I'm sitting in homes for 10, 15 minutes and I can feel it. I'm starting to get sneezy, I'm starting to feel stuffy. Imagine people that are living in those situations."

While those images may seem shocking to some, Qaqqaq says they're nothing new,.

"The entirety of the history of the relationship between Inuit and the federal government has never been good. We have never, ever in that relationship seen adequate housing, livable costs or year-round clean drinking water," she said.

"It's not by choice that Inuit went to residential school, had forced relocation, had their dogs slaughtered. The colonial history has been so impactful, and it's still very much in your face. And the federal government does less than the bare minimum to address the concern."....

Whose Land Is It Anyway? A Manual for Decolonization

An Indigenous Advisory Committee may be comprised of "respected voices in their communities," but it's unclear how much of a say they'll have during discussions about future energy projects.

The Canada Energy Regulator (CER) has only existed for about a year, having taken over the jurisdiction of the National Energy Board, an independent agency that regulated the country’s pipelines and power lines for nearly 60 years.

After more than a year of public consultations, Prime Minister Justin Trudeau’s government created the new energy regulator as part of a plan to modernize federal energy regulations. A big focus of the modernization process was improving the government’s relationship with Indigenous communities, many of whom are directly impacted by natural gas pipeline projects.

On Aug. 26, an Indigenous Advisory Committee of nine members was announced, some with direct ties to energy industries. The committee is described as a “key part of the CER’s commitment to advance reconciliation” put in place to advise the agency on how to approach Indigenous communities and increase their involvement in energy projects.

But while the committee has an overarching advisory role on strategic reconciliation and Indigenous values, its members have no authority over CER-regulated projects, operational matters or regulatory decision-making. The committee will also not advise on any decisions or orders made by the agency, as outlined in their mandate.

The National Energy Board, the energy regulator's predecessor, was criticized for its lack of consultation with Indigenous groups over major pipeline projects. Most notably, the Trans Mountain Pipeline which crossed through several unceded, First Nations lands in B.C.

Leaks from the pipeline have also resulted in devastating environmental losses. On June 13, a spill near Abbotsford, B.C., left crude oil over fields used by the Sumas First Nation for pasturing cows near an aquifer the nation uses for their water source. It was the fourth time the pipeline had spilled oil on to the reserve in the last 15 years...... 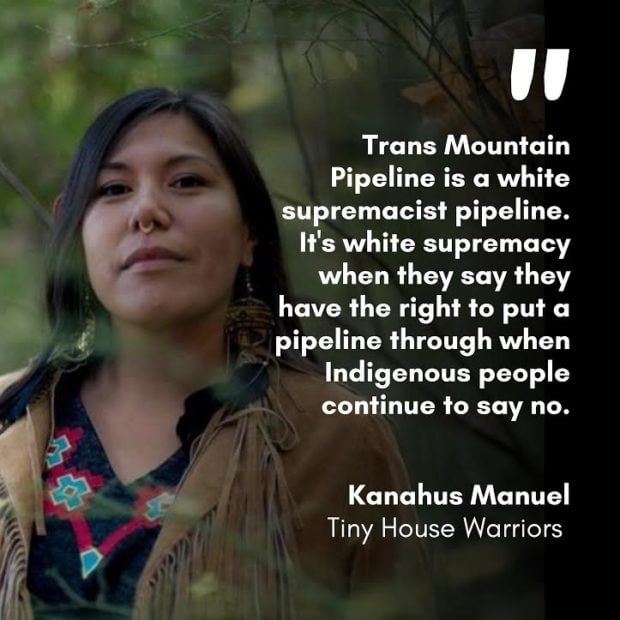 "The OPP will be coming back today to read amendments to the injunction after a week of arrests. Police claim they are being peaceful while they criminalize Haudenosaunee researchers and journalists, attempting to silence their work. Update from last night..."

"Media in Canada would be smart to turn their heads here. This is getting scary and violent and we've already been here on the east coast..."

"Trina Roache joins host Dennis Ward in studio from Halifax to give context and analysis of the lobster conflict raging in Nova Scotia. 'This is not an illegal fishery..."

A MUST READ by Karl Dockstader About 1492 LandBackLane

Thanks for all the links. Watched and read everything. Canada needs to negotiate the treaties and land claims in good faith.

Here is Pam Palmater's timely video about her own nation.

In this video, we talk about the historical and legal context to the current Mi'kmaw State of Emergency declared by the Assembly of Novia Scotia Mi'kmaq Chiefs due to the racist and violent attacks by non-native fisherman against Mi'kmaw fishers. We also talk about the legacy of Donald Marshall Jr., whose court case resulted in a Supreme Court of Canada decision upholding our treaty right to fish and sell it.

Six Nations research shows Canada owes $6 trillion dollars for Six Nations money spent by the colonial government on everything from the Law Society of Upper Canada, to McGill, to the pre-Confederation government's public and war debt.

WATCH: "Since CBC News cut my speech from their broadcast and silenced another Indigenous voice, I'll post it hear..."