"Just wanted to casually let you know that right now a movement in France is being appropriated to advance a pro-oil, anti-climate change, anti-immigration, Nationalist movement - en masse across Canada."

"We want Nationalism! We want borders! We want our country back! ...And why the hell are you not out here?"

Well, to be fair, some yellow vests were all it took to convince the left that protesting fossil fuel taxes is now a progressive action, so you can hardly blame anyone who thinks there's magic in those vests.

Also, according to that manifesto circulated on social media, restricting immigration is one of the yellow-vest demands. So it's not aa if these Canadian wannabees are adding in that position out of the blue.

..a remedy for your ambiguity lagatta

The yellow vests movement in France is now shifting decisively to the left, as shown by the huge anti-capitalist bloc in Paris on the December 8. Led by prominent campaigners against police violence, The Adama Committee for Justice and Truth, it included railworkers, striking postal workers, other rank and file workers, students, migrant workers groups, important collectives such as The Rosa Parks Collective, sex workers, LGBTQ groups and many more. The mood has changed completely since the horrific mass arrest at a school in a Paris banlieue; now workers are calling for a general strike, and the student movement is exploding with schools and universities blockaded throughout the country.

I think that if citizens in, say, Barcelona were to take to the streets in huge numbers, waving raw hotdogs, and this got the attention of the Spanish government, and made the news every day all around the world for weeks, then I think we'd see plenty of protesters bringing their own unrelated demands, as well as lots more "hotdog protests" everywhere.  If you've got a grievance and a hotdog, you're set.

..no magoo that is not it. the struggle with macron began way before the yellow vest made their appearance. many strikes were taking place. the leadership of those strikes caved. as did the left leadership. and marcon went ahead with his plans. the yellow vest movement presented another opportunity to continue that fight with marcon..that bypassed the leadership. in the same way that square occupations caught fire a few years ago. again bypassing leadership.

No surprise to find an ersatz ugly Canadian version of an authentic grass roots uprising to match the ugly ersatz pro-Imperialist 'progressive' twisted sister on the fake left.

"[Very small] Crowds across Canada came out Saturday inspired by the 'yellow vest' protests that have been ongoing in France for the last five weeks and have resulted in eight fatalities. Donning the same yellow vests as French protesters, crowds came out in Edmonton, Toronto, Winnipeg, Okanagan, Moncton, Calgary, Saskatoon and Halifax with signs that read 'Canada First', a take on US President Donald Trump's 'America First' slogan, as well as 'Trudeau the traitor.' All the protesters shared a disdain for the status quo...."

Why did you insert "Very small" into that quote?  Did you follow them across Canada and see with your own eyes?

from a quick pictorial glance at different cities there was on average 7-14 people attending and not all were wearing yellow vests.

how committed are you when you wear orange or none?

i guess some hard core bigots must draw the line at taking over someone else's symbol.

epaulo, there are some people I know in that video, and definitely movements I'm familiar with, including the movements against the killings of teens and young men of colour (black and brown). I've also interviewed people from the tenants' movements.

However, there was a rightwing undercurrent at the outset, refusing measures against climate change rather than demanding equitable solutions. All the better if that is not the focus any more.

epaulo, there are some people I know in that video, and definitely movements I'm familiar with, including the movements against the killings of teens and young men of colour (black and brown). I've also interviewed people from the tenants' movements.

However, there was a rightwing undercurrent at the outset, refusing measures against climate change rather than demanding equitable solutions. All the better if that is not the focus any more.

..they are still there but hold little sway and are massively outnumbered by the movements.

Video: The Faces and Voices of the “Yellow Vests” in France

That has not stopped politicians and activists of all stripes from attempting to claim the movement, but it is worth taking any opportunity to actually listen to the voices of the protesters themselves. So we can be grateful that video journalist Raul Gallego Abellan spent last Saturday in Paris asking a broad spectrum of protesters how they describe the movement themselves, and what they say to observers who want to focus only on the sporadic clashes with the police that broke out along the Champs-Élysées.

"We live under an ideology that has not been widely named or defined."

Humanity Against People   -   by Denis Rancourt

"Nature of the maturing geographical and global western class conflict of Trump and Macron."

A press release from the Canadian Anti Hate Network, a nonprofit that seeks to monitor, research, and counter hate groups, shared screenshots of violent threats being made within the Yellow Vests Canada Facebook group. Ricochet has confirmed that such threats were commonplace in the group. Threats were directed towards Canadian politicians, Muslims, Antifa (anti-racist activists), and police. Additionally, commentary that conveyed racist sentiments, including anti-immigrant statements, anti-Semitism, and Islamophobia, was common in the group.

Anti-racist community organizers also claimed on social media that a key administrator of the Yellow Vests Canada Facebook group, a Toronto resident named Tyler (Marc) Malenfant, has been linked to advocacy for white nationalism. Screenshots of conversations in which Malenfant appears to espouse white nationalist views were published in 2015 by Anti-Racist Canada (ARC), a public interest research project monitoring the extreme right in Canada. Malenfant did not respond to requests to clarify his past comments by press time.

At the rally in Toronto, protesters occupied a Christmas market in the city's central Nathan Phillips Square. For two years, the square has been a frequent setting for tense and dramatic confrontations between far-right anti-immigration demonstrators and their opponents. On Saturday a small group of anti-racist activists faced off peacefully with approximately 30 anti-migrant demonstrators. Chants were hurled back and forth between the groups.

Former Toronto mayoral candidate Faith Goldy, an avowed white nationalist, led the far-right group in chants of "What do we want? Nationalism!" and "Canada first!" The rally was joined by nationalists from within the Chinese Canadian community and self-professed Hindu ultranationalists. "See, look, this is diversity," a speaker from the Hindu group RISE Canada said proudly to an associate.

The Yellow Vest Canada movement “is unique in that it is bringing together the anti-Muslim, alt-right neo-Nazi and ultra-conservative elements that make up the far-right movement but don't always play nicely together or overlap," said Evan Balgord, executive director of the Canadian Anti-Hate Network. 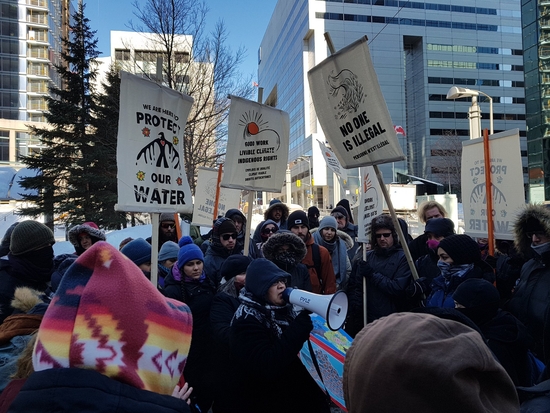 Indigenous rights activists meet members of the #UnitedWeRoll pro-pipeline convoy in Ottawa as police look on . Members of the convoy and supporters are expressing white nationalist, anti immigrant and anti-Indigenous sentiments.

So here's the, uh, "crowd" gathered on Parliament hill to hear Max Bernier: 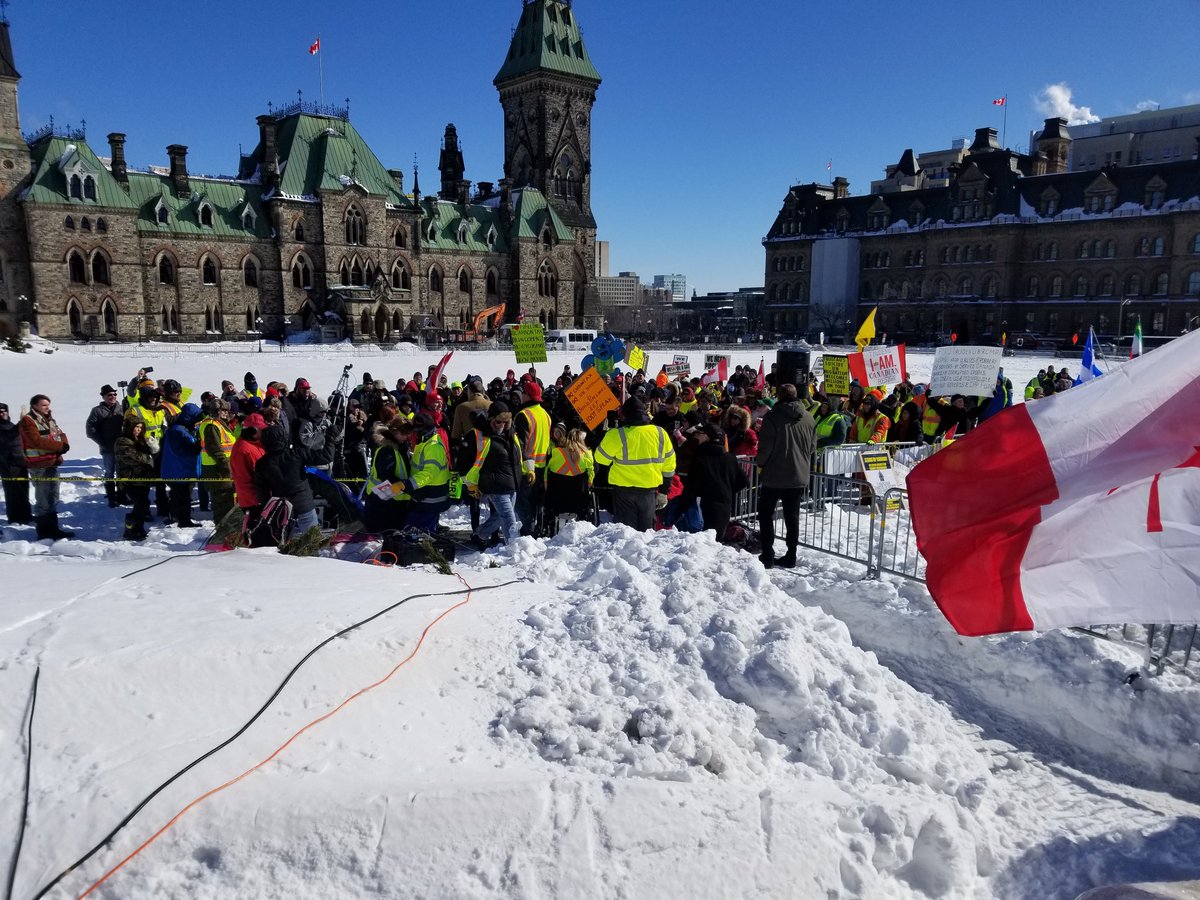 nobody working currently I know in the industry supported this.

they all say "if you're not working currently in the petroleum industry then you sucked and won't be hired back".

They’re travelling by buggy, brougham, cabriolet, and calash. Pulled by worthy teams of two, four, six, and even eight animals, the United Horse-Drawn Carriage Makers for Canada are braving the sub-zero temperatures and unplowed shoulders of the Trans-Canada highway, as they make their incredibly slow and inefficient way to Ottawa.

Their stated intention (once they reach their destination in late spring or early fall, weather permitting) is to demand that the federal government prop up a crucial and indefinitely sustainable part of the Canadian economy: transportation by horse.

“And let in fewer Muslims,” adds one carriage-maker, Tim Hackney, who hails from the horse fields of northern Alberta. “That’s a crucial part of our petition to save the horse industry. Less foreigners. And by foreigners we mean brown people. And more supporting an industry that is definitely not outdated, and has no obvious shelf-life.”