'It's Going To Be A Hot Indian Summer': Secwepemc Women Warriors Call Land Defenders To BC

'It's Going To Be A Hot Indian Summer': Secwepemc Women Warriors Call Land Defenders To BC (and vid)

"...She also issued a call to warriors across Turtle Island. 'I want to let the warriors know that we need their help right now and to make their way to BC. It's going to be a hot Indian Summer.' She also addressed federal Justice Minister Jody Wilson-Raybould, who she said, 'has to respect Secwepemc law, and she has to respect Indigenous title and start respecting and acknowledging our Indigenous title.'

In a recent interview with APTN, DT Cochrane, an economist and researcher with the Indigenous Network on Economies and Trade, said Canada's purchase of the pipeline and its hopes of selling to private investors are 'untenable' due to the outstanding issue of Aboriginal title on unceded Secwepemc and other First Nations' lands.

Cochrane said that local Indigenous resistance to the pipeline, which is led by grassroots people and Indigenous and non-Indigenous allies in BC and across Canada, makes the project's 'unquestionable risk' the 'death for any potential asset'. 'If you cannot assess the risk of an asset, you cannot price an asset - so how could investors personally back that asset?

At a May 2 press conference announcing  the Chiefs of Ontario who represent 133 First Nations in that province, were joining the Treaty Alliance, Squamish Nation councillor Khelsilem predicted the Indigenous-led resistance to Trans-Mountain would be big. 'I think we're seeing the beginning of what will become the largest civil disobedience in Canadian history,' he said.

Federal Natural Resources Minister Jim Carr has indicated that the Trudeau government will not rule out using police or military force to quash resistance to the pipeline.

'We're stopping pipelines. That's why we're here. We are pipeline fighters. We're land defenders. We're water protectors. We're the Indigenous women of this land. We are the title holders of this land. We are the mothers. We are your sisters. We are your aunties, and we are your godmothers. And we are calling for all of our people who care for our water, those that are serious in stopping the pipeline, to join with the Tiny House Warriors as we shut this pipeline down."

"To all you Indian affairs government fed chief and council that have sold out to Kinder Morgan. Learn the truth and power of our Secwepemc law, title and rights! - KM-

Breaking: "I am heading to BC tomorrow to meet with Kanahus Manuel to discuss coordinating and stepping up Indigenous and Ally opposition to KM Pipeline Expansion Project - especially in light of federal conflict of interest in purchasing the pipeline!" RD

"The Tiny House Warriors have established a new village in BC's interior at the site of a planned worker's camp and are calling land defenders to the area in an effort to stop the Trans Mountain pipeline expansion and assert Secwepemc sovereignty in their unceded territory..."

..txs for this thread ndpp

"AFN National Chief candidate Russ Diabo showed up at the Tiny House Warriors village at Blue River, in unceded Secwepemc territory Wednesday evening to show his support. Here's what he had to say."

We Own It, So Let's Kill It: What To Do About Kinder Morgan in an Era of Reconciliation

"This should be required reading for every non-Indigenous Canadian. Did you pay taxes to support Trudeau's war against Indigenous rights? Didn't think so."  - Comments-

Cowen: The Jurisdiction of Infrastructure: Circulation and Canadian Settler-Colonialism

liked the aryicle but not your quote too much. it does the article disservice imv.

Well, there you go. I liked it a lot. But a good reminder in any case that one should always read the article not just the pull-quote.

"He said he supports the Tiny House Warriors effort in 'bringing attention to the need to stop this project and make sure it's never built. He also said the Secwepemc-led fight against the pipeline is 'directly connected' to the issue of Aboriginal rights, title and jurisdiction because the Secwepemc have 'never ceded or surrendered their land.' 'It is Aboriginal title territory and the people who hold that title are the community people themselves, the families and the communities that make up the nation.'

But Diabo says based on all indications so far, Canada is still working to 'extinguish Aboriginal title' in a more covert way than Trudeau's father, late Prime Minister Pierre Trudeau, attempted to do with the Liberals' 1969 White Paper. Despite supreme court rulings like Delgamuukw and Tsilhqot'in which recognize Aboriginal title to unceded lands, Ottawa is still maintaining their extinguishment approach under this modern treaty process,' Diabo said.

'And this effort by the Tiny Houses Warriors is a good way to bring attention to the fact that the prime minister's ignoring their Aboriginal title and pushing the project through.' Last spring April Thomas, a member of the Canim Lake Band told APTN at a Secwepemc-led protest against the pipeline that Canadian laws that draw boundaries between communities within wider Indigenous nations are just another divide and conquer tactic that's been used on our people over and over again.

'We have a housing crisis, a poverty crisis and they've made our people so desperate that they feel like they're obligated to sign these agreements because they think that's all they're going to get. Earlier this week, Kanahus Manuel told APTN the Secwepemc have a responsibility to not only their own people but that of neighbours."

"Trudeau can talk about reconciliation, but buy-out of pipeline is violation of inherent Secwepemc rights and internationally protected rights in UNDRIP. Tiny House Warriors Music Concert and Launch of Tiny House at Mt Robson Visitor Center, Thursday, May 16, 2018 from 2-8 PM.'

Quote:
The Art Gallery of Ontario has scrubbed the word "Indian" from the title of a painting by the late Canadian artist Emily Carr, because "that is a word that causes pain," curator Georgiana Uhlyarik says.

I guess the pain is going away.  Glad it wasn't me that used that word.

It was the wish of the people who live there that the painting title be changed. Others may feel differently. Eg 'American Indian Movement,' Union of BC Indian Chiefs.' The thread title is that of the APTN article. So sorry, no shit for you to disturb here today...

In conversation with Kanahus Manuel — A woman of many names

Kanahus Manuel has been called many names — a political activist, a pipeline protestor, a tiny house warrior, a freedom fighter, a traditional birth keeper, a tattoo artist, a land and water defender. But Manuel, also a granddaughter, daughter and sister, identifies herself first and foremost as a mother.

I managed to get a hold of Manuel, where she was sitting surrounded by three of four of her children in one of the mobile tiny homes camped out near Blue River, a small B.C. community surrounded by the Rocky Mountains, halfway between Kamloops and Jasper. I asked her about her recent arrest, an upcoming Kinder Morgan shareholders meeting regarding the government's offer to purchase the Trans Mountain pipeline assets on Aug. 30, the main reasons she is opposed to the tanker expansion project and whether she has hope for the future. 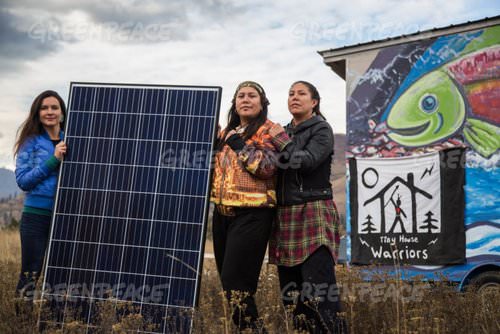 Kanahus Manuel poses with Melina Laboucan-Massimo and her twin sister Mayuk on the day they solarized their mobile tiny homes. Nov. 1, 2017. Photo by Greenpeace Canada

She emphasizes, 'To all those wanting to fund this pipeline fight, the fight is here in the Interior as it enters our territory. This is where the fight is at.'

And in another Facebook video today, Manuel couldn't be clearer: 'We want to stop it by any means, but we need all the people of Canada that stand with Indigenous sovereignty and tribal law to stand with us as we shut this pipeline down..."

My wife and I stopped in for a chat on the August long weekend. This is where the fight is going to be if you want to stop the pipeline. It seems that most of the resources are being sucked up by the protests on the coast. We could win the battle on Burnaby Mountain and still lose the war against the pipeline. These people need our support.

'Crown land' is a figment of your imagination Justin Trudeau. This here land we are stopping your pipeline in is unceded Secwepemc Territory. No consent to push this pipeline through our Unceded lands - that includes Kinder Morgan and Rachel Notley too! (on vid)

Please support those on the frontlines!

"..."We're done with the 'consultation' because the only ones the federal government wants to consult with are the people that are selling us out. We have not seen any 'reconciliation' by Canada and it's not going to be until there is full recognition of our title. As my father said, 'they'll never give one square inch up without a fight.' So get prepared. There is going to be a fight..."

This is far from over.

Justin Trudeau: Update on Our Government's Plan to Move Forward With the TMX Pipeline

"The federal Liberal purchase of KM pipeline and plans to 'move forward' with the expansion project shows Canada remains a racist, nakedly Colonial Settler State that does not give a damn about Indigneous Peoples, Aboriginal Title & Rights or internationally recognized human rights!"

Re TransMountain (and vid)

"NDP MP Romeo Saganash asks 'Why doesn't the Prime Minister just say the truth and tell Indigenous peoples that he doesn't give a fuck about their rights?"