Israel´s IDF continues to increase its troop concentrations to the border with Gaza.....meanwhile this Friday will be the Gaza anniversary of the March of Return, while rumours spread of Israel´s plans to re occupy Gaza and Hizbollah´s preparations to launch military actions in support of Hamas!

This in the context of US´recognition of the Syrian Golan Heights as Israel´s Territory?

Will this be extended to Gaza?

Speculations perhaps, but can anyone deny the approximation to third world war? Are we to just sit on the sidelines as we watch this proceed?

By Palestinian Centre for Human Rights 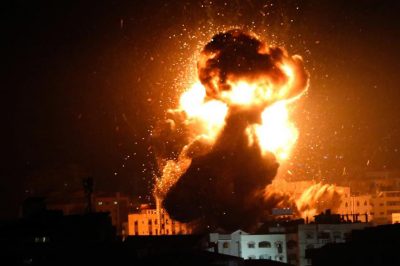 On Monday and Tuesday, 25 and 26 March 2019, Israeli forces carried out dozens of airstrikes on various targets across the Gaza Strip.  These airstrikes have been the most violent in recent months that have not spared civilians and displaced dozens of them after 10 days of a similar aggression.

For 12 hours, two million Palestinians in the Gaza Strip lived in a state of terror and fear due to the continuous Israeli airstrikes that targeted various locations; some were in densely-populated areas throughout the Gaza Strip.

According to the documentation by PCHR’s fieldworkers, the Israeli warplanes launched 66 missiles at 34 targets across the Gaza Strip, including residential buildings and civil facilities, under the pretext of having security service offices underneath or near them.  As a result, 2 Palestinian civilians were wounded due to the scattering glass and bricks following those airstrikes.

During and after the airstrikes, dozens of civilians were forced to evacuate from their houses dreadfully in the cold weather at night, rendering 13 families comprised of 70 members, including 44 children and 14 women, homeless.

Israeli warplanes pounded the Gaza Strip overnight and into Wednesday morning—despite reports of a ceasefire—after a Palestinian rocket was fired toward the Israeli city of Ashkelon. Both Hamas and Islamic Jihad denied responsibility for the rocket fire, saying it was an “individual act.” Meanwhile, Israeli forces shot and killed an 18-year-old Palestinian in the West Bank during an arrest raid in a refugee camp near Bethlehem.

The latest violence came as Israeli Prime Minister Benjamin Netanyahu returned to Israel early from a trip to the U.S. where he met President Trump at the White House and welcomed both Republican and Democratic lawmakers to the annual conference of AIPAC—the American Israel Public Affairs Committee.