NR you are a complete idiot if you believe Liberal lies. Christy has lied at every turn and you want to trust her word. Its mind boggling really. She ran on jobs last election and the election before that. So where the fuck are the jobs? But you think that this time she is going to deliver.

NR obviously knows something that the pollsters don't.

I agree with NR on the point that it's going to be a trouncing.

308's numbers are ludicrous. From where I stand, the NDP look lost. No platform. Weak exposure. Few viable candidates. No leadership. Shouldn't be easier to win right now but they can't seem to get their shit in gear. And they seem to be taking really stupid advice. Meanwhile the BC Liberals get more and more outrageous. An entire wasted election cycle.

The NDP as a brand is failing everywhere. Either they can't accept what they need to do to change, or the party is being deeply undermined from the inside.

B.C. NDP 'Good Enough' To Do Better Than Liberals Ever Did (huffingtonpost.ca)

I agree with NR on the point that it's going to be a trouncing.

308's numbers are ludicrous. From where I stand, the NDP look lost. No platform. Weak exposure. Few viable candidates. No leadership. Shouldn't be easier to win right now but they can't seem to get their shit in gear. And they seem to be taking really stupid advice. Meanwhile the BC Liberals get more and more outrageous. An entire wasted election cycle.

The NDP as a brand is failing everywhere. Either they can't accept what they need to do to change, or the party is being deeply undermined from the inside. 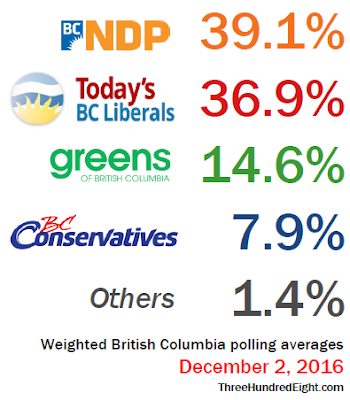 NorthReport wrote:
Never mind nonsensical polls try talking to the campaign workers and you will quickly realize how demoralized and what a mess the BC NDP are in

I asked you for a poll of campaign workers not of voters. The ones I know are not demoralized. They are cautiously optimistic. I find that refreshing from last election when the campaign team thought they could cruise to a win. Any campaign I've ever been involved in was always better if you are running scared because that is how you win.

The thing to keep in mind is the Conservatives at around 10%: they don't even have a leader.

Why is that a thing to keep in mind? If anything, we need a stronger Conservative showing to split the vote.

In reply to Josh,

My guess is those aren't election issues at all. This sounds like mainstream media flinging red herrings in the NDP's direction, hoping they'll chase after them and lose.

It's been proven that megaprojects and pipelines aren't the only "job opportunties".

Thanks for proving that you've always been a conservative, though.

Thanks for clarifying.  I was wondering why the Cons were doing better than the Greens in Metro Vancouver.

Has the actual campaign started yet, or is this all still in the "pre-election" zone?

The third party campaign is just getting into swing. Any day now the business community will be starting nearly none stop radio attacks on the integrity of the NDP. Last election you couldn't listen to any radio station at commuting time that was not playing attack ads sponsored by Howe street.

it's already started with "say anything to get elected John".

while people are listening to an ad saying anything to get elected.

No, that's a provincial poll.

it's a provincial poll not a federal one.

yes it's a provincial poll.

I saw the Conservative blue in the 30's and got confused. Apparently the polling company ran out of colours after orange, green and blue so had to have two blues in their charts.

i thought it was too cute. kinda a subtile way of saying they're both the same.

Remember the BC NDP were leading by 20% in the polls prior to the previous 2013 election, so these recent BC polls are meaningless, unless you of course you wish to live in fantasy land.....

Meanwhile back in the real world where BCers are looking for decent jobs, some unions have already decided what to do:

I guess Ironworkers are just coming out and declaring what they do in private anyway. Good riddance to that kind of stupidity. Let's build bridges to nowhere and a mega-dam that cannot be profitable because Ironworkers need jobs? What a sad lack of imagination. And guts.

Is this a change, or have the Ironworkers always been a right-wing union in B.C.?

They just want jobs for their members.

There is also a union on the Vancouver Island which is backing the BC Liberals as well I believe.

Folks need to wake up and smell the roses.

Even in the USA some unions are liking what they hear from Trump. Don't be surprised if major USA Unions back the GOP next time

I don't think neither the NDP nor the Democrats know what they are doing governmentwise.

One thing you can count on is that left-wing governments do not deliver.

At least the right-wing delivers for their supporters.

Me thinks more and more the party is over for left-wing governments.

Just watch Trump as he changes America. Not supporting it; just an observation. Lefties need to get out of their echo chambers, and look around to see what is actually going on. It disappoints me actually. I am getting much more enjoyment out of music than politics, but then I always have, eh!  And it's time for me at least to stop flogging a dead horse.

"One thing you can count on is that left-wing governments do not deliver."

what are you talking about?

just what in hell has the BC Liberals delivered?

Ministry of Children and Families causing the death of children in care.

"The United Steelworkers (USW) is throwing its support behind John Horgan and the BC NDP in the upcoming provincial election.

The union made the announcement earlier this week via press release.

The statement lists multiple reasons for the endorsement, citing the BC Liberals ignoring the loss of tens of thousands of jobs in the forest sector while giving tax breaks for their employers. The release went on to state that the workers were tired of a government that’s always there for the wealthy and big corporations that donate heavily to Clark’s government."

But the problem with the post above is that there is no new support for the NDP here which they need to win the election.

Time for a corruption inquiry in BC

Gitxsan hereditary Chief Yvonne Lattie of the Gwininitxw house group was in National Observer’s offices this week describing how, even after decades of court victories and promises of reconciliation, her community doesn’t truly have a voice at the table.

As part of the LNG project, TransCanada plans to build a natural gas pipeline through the Gitxsan Nation’s traditional territory in Northern B.C., and Chief Lattie is particularly worried about plans to run a pipeline right under a lake. The community has been raising their voices for years but feel they just don't get heard in the provincial capital.

Community voices are drowned out by decibels of oil and gas lobbying and piles of industry cash, quantified in a new study released by the Canadian Centre for Policy Alternatives this week. National Observer's Carl Meyer reported on the truly stunning volume of lobbying and a “barrage” of oil and gas donations to Premier Christy Clark’s Liberal Party.

It's so routine-seeming at this point that it's gotten hard for many British Columbians to summon (more) outrage over the unlimited stream of political donations to the B.C. Liberals — the New York Times recently dubbed B.C. the “‘Wild West’ of Canadian Political Cash.”.....

While that may well be true, it definitely will not be happening before May 9, which is only going to deliver us 4 more years of this kind of government.

..you may think that or you may want that but you don't know who will win the election.

North, it's against forum rules to campaign for a right-wing party on this site.

Christy also has CLAC -- the Christian Labour Association of Canada, if you've ever heard of that  -- working at Site C and apparently not representing their members very well there, according to Alaska Highway News. (If you check out their website front page, you'll see an entry on how not to be a "Grump-a-Lump", if that's any indication of their advocacy).

The resource sector has been good at propagandizing to its workforce, and it's a constituency that will always put jobs above other economic considerations. That's why education about the shitty economics of these projects is so critical.

Plus I'd add that vague and empty promises about "jobs" from the NDP doesn't sound real to anybody and it won't work. What people need to hear are specific policy positions - and why - and specific directions for the economy - and why. This is where the NDP repeatedly fails to deliver, I think because they're still stuck speaking to a dwindling constituency.

The Independent Contractor's Association recently the BC Liberals $33,000 during the last few months. I'm sure there is no connection between that and CLAC getting so much work in BC. Ha! Ha!

Why don't they just ban high heels for servers, like they do elsewhere? Someone should be pointing out that restaurants will still informally punish employees who don't follow an unofficial dress code. This is where the BCNDP can come in.

..from an email. the leap has been raising money for an ad that ran in sunday's province.

IIRC that "stock market" wasn't any more accurate than the polls last election.

Quote:
A rebel group of angry construction workers say they’re mad as hell at their own union for endorsing Premier Christy Clark’s Liberal Party in the approaching B.C. election.

Now they’re demanding the 1,800 B.C. members of the Ironworkers Union be allowed to vote on the endorsement before the campaign kicks off for the May 9 election.

“I couldn’t believe it when I heard about it,” said retired Chilliwack ironworker Ivan Westcott, who’s leading the charge to force a vote on the union’s endorsement.

“This is a Liberal government that ripped up union contracts,” Westcott, an honorary member of the union since his retirement, said Wednesday.

“There was no advance warning about this to the membership. We should get to vote on something this important.”