The Hypocrisy Of Woke Politics

Why is nobody on the left celebrating an historic election of a black official in Kentucky?

We've been reporting on election 2019 this week and I didn't want you to miss out a genuinely historic result which occurred in Kentucky. For the first time in state history, Kentucky elected an African American to the post of attorney general. Daniel Cameron, a former Mitch McConnell aide, became the first African American elected in their own right to actually any statewide office in the Bluegrass State, a state which by the way is overwhelmingly conservative and 87% white.

I'm sure you were well aware of Cameron’s trailblazing election though given the overwhelming celebration of his achievement by civil rights leaders, Democratic politicians, elite media, and all of the folks who typically celebrate such identity-based achievements, right? The white women who were horrified when AOC endorsed white man Bernie Sanders, the pundits who told me you have to be sexist not to support a woman, and those who support Kamala because of her identity as a black woman; they must have been elated by Daniel Cameron’s victory, right? After all, if you can't see it, you can't be it. So, if the thing that matters is identity politics, surely Cameron’s victory would be widely celebrated. Wait...what's that you say? Virtually no Democratic politician said a damn thing? Hmm. Weird.

Perhaps that's because identity politics is a thin gruel to be offered by the Democratic party establishment, corporatists, and media elites in lieu of actually delivering anything of consequence. The lack of even one mention of Daniel Cameron’s election shows you that they are well aware just how shallow it really is.

The truth is so obvious that it's embarrassing to state it. What you do, the policies you advocate for, and the people you help matters. It matters a lot more than having equal diverse representation in the advocacy and implementation of racist, anti-working-class policies. It was Democrats who put in place the racist 100-to-1 crack sentencing disparity. Thanks Joe Biden! Democrats who proudly destroyed welfare as we know it. Democrats who let the banksters off the hook so they could pillage African American and Hispanic communities with their subprime mortgages of mass destruction.

Woke people need to wake up. If the Democratic party wants to win and wants to be about something, then do something for the multi-racial working class instead of just changing the race of the so-called leader that runs palliative care for the working people in the giant hospice that both rural and urban America have become. And by the way, if you don't believe the suffering of the white working class is just as real as that of the black and brown working class because they have "privilege," people who have watched their jobs shipped overseas and their towns flooded with drugs and their young people sent off to die in war all by a bipartisan consensus, then you are just as heartless as those who would put precious immigrant babies in detention centers.This isn't a suffering Olympics where we get to stand in judgment of who is most oppressed. If Democrats want to be the party of working people then they can't pick and choose which people.

Some valid points there-it's comical that whoever wrote the headline for the piece totally misunderstands the author's intent-but what the author misses is that the reason nobody among "progressive" Yanks is celebrating the election of that official is that the progressive Yanks get it that it's not a victory to elect just anyone who HAPPENS to be a person of color, that it's meaningless to elect a person of color or an LGBTQ person or a cis-woman simply because of their identity, if that person happens to be a reactionary.  It's bizarre that she would argue that people who have connected with identity politics should either have to be identity absolutists-and, therefore, celebrate the election of ANYONE who happens to be of a generally unrepresented identity-or totally reject the idea that representation matters at all.

And yes, the Democrats and other progressives in the U.S. need to re-emphasize the idea of class-but she seems to be missing the point that it was the centrist wing of the U.S. Dems who were playing the identity card in '16, not the progressive wing.

And as to the white working class:

1) Yes, their suffering is real;

2) Also yes that people of color go through things the white working class never goes through-when working-class whites get pulled over by the cops, those working-class whites can pretty much say or do anything short of actually physically injuring the cop and not face any risk of imprisonment or death; most people of color are always going to be in fear for their survival in the same situation or in any other situation with law enforcement, so that is a whole set of issues the left has to be attentive to.

I think there has to be a solution to all of these questions that lies somewhere between "all that matters is identity" and "representation is irrelevant".

And to get to that place, there has to be some way of addressing the massive breakdown of trust that occurred between historically oppressed communities and white progressives at key points in U.S. history-because it is that breakdown of trust that has made it impossible for communities of color to believe they can trust in purely universalist, "one-size-fits-all" programs of change.  They've been burned too many times on that in the past.

How does trust get re-established on this?

Thanks for the note of reality, Ken. Wish I knew the answer. But I know it isn't: "All that matters is class."

"Journalist Chris Hedges talks to Paul Street, author and political commentator, about the failure of the American Left, new forms of resistance, democracy and the deep roots of [North] America's ruling oligarchy."

To give a bit of background on the author of the piece in the opening post, her name is Krystal Ball. She has written many articles from a left-wing Democrat perspective, and is very critical in general over the use of identity politics, even though she considers herself culturally left-wing. To clarify, she's calling out the hypocrisy of liberals who will say, for example, that a Kamala Harris victory will be important for black women, even though Harris' policies as a prosecuter were bad for black families in California. Or to paraphrase another question she asked, if your a Latino who has been deported from the US, does it matter whether or not the President under whose watch that happened is black? Essentially, what she's calling out is the use of identy by the Democrats to gain votes while doing nothing of substance to help those minority communities. She also defended AOC et all when they came under attack for endrosing old white man Bernie Sanders over Elizabeth Warren.

Trust is reestablished through being specific and delivering. For example, subsidized daycare should be rolled out in lowest income neighbourhoods including indigenous even if it is intended to be universal eventually.  Widespread support for things like free lunch in schools in low income areas is easy to get. Most people would also be fine with extreme low income people getting free public transit even though they would object to raising social assistance by 100$ a month.

Racism must be addressed directly but measures to alliviate poverty should help everyone living in poverty regardless of race.

The other problem with woke politics is when policicians use identity to excuse their failings and to not do any introspection, or even when people who check off different identity boxes go after each other.

The other problem with woke politics is when policicians use identity to excuse their failings and to not do any introspection, or even when people who check off different identity boxes go after each other.

If indentity politics was anything that mattered then the best POTUS could be someone like Condoleezza Rice.

I saw  this meme on FB the other day that pretty much makes the point. 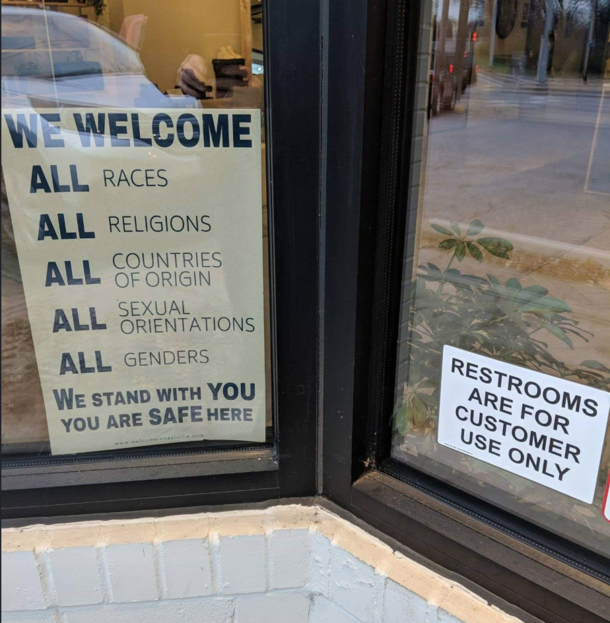 It's bizarre that she would argue that people who have connected with identity politics should either have to be identity absolutists-and, therefore, celebrate the election of ANYONE who happens to be of a generally unrepresented identity-or totally reject the idea that representation matters at all.

If one reads the article, that is not what she is arguing. She uses the reprehensible Republican to illustrate that the Democratic Party's often absolutist reliance on identity politics, regardless of what a politician does or does not represent, is a cynical tactic of convenience and not a faith;  one they will turn off and on based on partisan politics.

So when it comes to DNC approved candidates, such as Kamala Harris (or Hillary Clinton) they do posture as "absolutists", boosting their candidates identity credentials over bad policy and behaviour.

The truth is so obvious that it's embarrassing to state it. What you do, the policies you advocate for, and the people you help matters. It matters a lot more than having equal diverse representation in the advocacy and implementation of racist, anti-working-class policies.
....
I could spend the next ten hours in a filibuster of woke Democratic hypocrisy on this issue. Tulsi Gabbard is a woman of color running for president. Why does she get no love from the left? It’s because she doesn't step in line for the heterodox pro-war policies that have hijacked the party. ...

As far as "totally rejecting the idea that [identity] representation matters at all",  I don't see the author arguing that either:

Now look, I don't want to pretend that race and gender glass ceiling-breaking is meaningless. It's not. I loved that the first president my kids knew was a black man. It does make a difference to see people of color and women in leadership roles. But if those people pursue the same racist, classist, elitist, crappy policies of their white brothers and sisters, well, it's not really change we can believe in, is it? ....

Bill Maher calls out the "Guardians of Gotcha"