Michelle: You made me laugh.

It's the preliminaries. We might not even play the Americans again. Miller with saves though. He's underrated.

Without Miller the US would have been blown out of the water...nonetheless a huge disappointment...Hockey...suppose to be OUR game!!!!!

Ridiculous to have highly paid NHL prima donnas in the Olympics.

The best way for you guys to get revenge?  Beat the Americans in basketball in 2012!!

Canada will have to play the Germans (cakewalk) and then the Russians. At that point, beating the Russians will take Canada to the Semis. I kinda like the idea of Canada having to beat, well, EVERYONE, to win a medal.

It's all good, it's all hockey. That's what we're supposed to care about, right? Good hockey, whoever plays it?

Maybe some of that "buy the podium" cash should have gone into goaltender development.  Compared to Ryan Miller, Marty looked kind of bush league-ish.

No matter, let's get out there and take it out on the Germans!

Maybe some of that "buy the podium" cash should have gone into goaltender development.

Maybe some of that "buy the podium" cash should have gone into goaltender development.

First, I don't know how you go about comparing goaltenders "of all time".  The game changes over time, making comparisons pretty much impossible.

Second, I'm not the guy to have that debate with anyway, since I pretty much stopped watching NHL years ago.

Third, other guys who might want to have that debate would argue that Marty's defence (New Jersey??) makes him look good.

Fourth, if I was foolish enough to enter into such a debate, I would point out that according to the NHL statistics, Marty faces fewer shots per game than Miller (26 v 31) but still has a higher GAA.  From the stats, Marty doesn't look like the best guy in the game at the moment, not by a long shot.

Finally, whatever the outcome of that debate, the bottom line is that Marty was the second best goalie tonight.  And by a huge margin.  He faced half the shots and let in more goals.

There are lots of diehard Martin Brodeur fans out there that will stick up for him even if he does something stupid like trying to hit the puck like a baseball (oh, wait he did!) or trying to jump on a puck well out of the crease (oops, he tried that too!).  But tonight, he had a shitty game.  And I'd be surprised if Babcock started him next game.

Well Marty Brodeur is the all-time shutout king after breaking Terry Sawchuk's record. They played at different times though and under different conditions. I've watched Ryan Miller stone the other team on more than one occasion, and his Sabres haven't always played the same kind of tight defensive game that Brodeur's Devils are so well known for playing infront of him. Miller sometimes seems to be Jason of Halloween infamy behind that mask when he's in the groove. He's damned good and last night was his usual scary self. Miller's in their heads now. And what Team Canada needs now is an EXORCISM!

I saw Canada vs Germany at Torino in 2006, however, and it was not  a pushover; Canada led 3-2 or 2-1, as I recall in the middle of the 2nd before finally taking off for the win

but could GER pull an upset? that would be a bit like Tunisia upsetting Brazil in soccer, but these things happen ....

back to Canada-US: when Crosby and Nash were clicking, it was excellent, and they easily could have had 3-4 goals between them; Nash also threw his weight around quite a lot, amazing for a guy known as a floater, and with that big reach reminded me of Frank Mahovlich or even Mario sometimes...

I think Luongo will see action against Germany. Brodeur certainly had too much adrenalin flowing on the second goal.

back to Canada-US: when Crosby and Nash were clicking, it was excellent,

anyway, re Brodeur passing the torch:

is the best we can come to an NHL player named Stills.
Maybe Young, Wendell can play the next game for Canada.
http://icehockey.wikia.com/wiki/Wendell_Young

I think Luongo will see action against Germany.

I wouldn't be surprised if Bobby Lu is in the net for the Canadians for the remainder of these Olympics.

10 Things We Learned from USA - CAnada

Number 1 is amusing. Since the media in 1980 was full of stories about the "superiority" of the American "way of life" over the Soviet version, then, obviously we have

1. The Democratic Republic form of government is superior to Parliamentary Democracy

10 Things We Learned from USA - CAnada

I think this, unfortunately, pretty much captures how most Americans view hockey:

"As a 13-year-old in 1989, Drury led his Trumbull, Conn. Little League team to the LLWS championship. He later switched to hockey, won the Hobey Baker Award, a Stanley Cup, an Olympic silver medal and now scored a goal in the USA's upset of Canada. Yet he's probably unrecognizable in 98-percent of the households in the United States."

[url=http://www.canadiantire.ca/jumpstart/]In Canada, 1 in 3 Canadian families cannot afford to enrol their kids in organized sports and recreation[/url]

Come on! Show your pride, Canada, and let's turf these thundering nitwits from the halls of power in Ottawa!

This pic pretty much says it all: 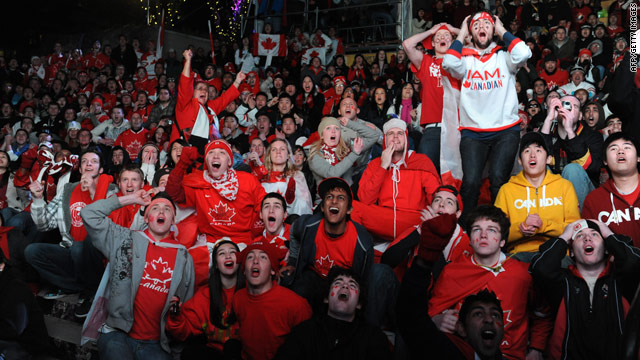 Nash also threw his weight around quite a lot, amazing for a guy known as a floater

Are you serious, where'd you get that intel?  Nash is the real deal, he's just stranded on a very mediocre NHL team that no one ever watches.  I don't know about Babcock's constant shifting of the top line, I think he should show a little more patience in letting them gel but Stahl does have hot hands right now and might be a good fit with Crosby.  Luongo could be the goaltender Team Canada needs, he's got a very good home record, knows the building better than anyone and deserves a shot.  The US were outplayed but Miller was incredible and could be the Dominek Hasek of 2010.  It's been great hockey and unless there's a catastrophe tomorrow, the game against Russia should be amazing and regardless of who wins the Gold medal will likely be the best game of the tournament.

how did I learn about Rick Nash??

How many times would I be watching the defensive zone, to my right, then look over to centre ice, at my left, and there was Nash floating about, waiting for his breakout pass ?? When/if he gets it, it's away to the races, but NOT a defensive stalwart, the least you can say.

I love the guy, best moves in the game -- even up against Ovechkin! -- charges the goal at impossible speeds and angles, and he matches well with some icons like Mario, the Big M, Espo and other Team Canada heroes, but ... will never win the Selke trophy

I posted the following in the TV ratings thread for the Olympics, but it's probably more pertinent in this thread:

CTV is reporting that the Canada v. USA game on Sunday was [url=the">http://www.ctvolympics.ca/about-us/media/releases/newsid=49636.html][col... most-watched sporting event in Canadian history[/url].

Is there a bigger focus on Americans in Canada than I had realized?

When I was listening to ESPN this morning while getting ready for work, the commentator said, with respect to this story, "Don't let Canadians ever tell you that they don't care what Americans think of them."

1. the USA is a good hockey-playing country; they were gold-medal finalists at the 2002 Olympics and winners in Montreal of the 1996 World Cup, among other good performances: we recognize talent.

2. The thing was broadcast at an excellent time slot on Sunday evening with all eyes on the first Olympic Games held in the country in over 20 years.

3. And yeah, there is some big brother-little brother stuff; but hey, I would have preferred Russia.

You folks in Canada may not believe this (but, then again, maybe you will), but this is on the front page of the "Hockey" link on NBC web pages for the Olympics:

"A regular ice hockey game consists of three 20-minute periods with 15-minute intermission[s] after the first and second periods. Teams change ends after each period."

I'm not sure what an "irregular" ice hockey game is.

I'm surprised that it doesn't continue like this: "The game is played on a rather large sheet of frozen water and the participants ("hockey players") have footwear which is similar to rollerblades, only instead of rollers, the footwear is equipped with a long, slender metal blade on the bottom of the shoes which allows the "hockey players" to glide on the surface of the frozen water.  The "hockey players" have a keen interest in obtaining possession of an object called a "puck," which is a black disc made of hard rubber (but it's not a big disc like a frisbee -- it's more like the size of a baseball, only it's flat on two opposing sides).  The "puck" is maneuvered about the surface of the ice by the "hockey players" using bent sticks (which are often humorously referred to as "twigs" or "lumber" -- hahahahaha!!!).  The object of the game is to insert the puck into a basket guarded by a "hockey player" of the opposing team who works diligently to prevent puck insertion (unless his name is Marty Brodeur, in which case he only pretends to prevent insertion -- and that is considered to be extremely humorous by the opposing "hockey players" and their fans -- hahahahaha!!!)..."

Going back to the actual description of the game of "ice hockey" on the NBC site:

"A team must not have more than six players on the ice while play is in progress [edit: Not technically true]. Typically, those players are: one goaltender, two defensemen, two wings [edit: not really "wings"] and one center. A lesser amount of players can be on the ice as a result of penalties; a goaltender can be replaced by a skater during a delayed penalty or at any other time of the game, at a team's own risk."

I think that last bit about "...or at any other time of the game, at a team's own risk" must have been a strategy employed by Team Canada last Sunday (it's really the only logical way to explain the final score).

NBC explalns the shootout (or not):

"If no goal is scored in overtime, the game will be decided by a shootout. Three players of each team shoot alternately until a decisive goal is scored [edit: What is a "decisive" goal?  Otherwise stated: How can I tell whether or not a goal is "decisive"?]. The remaining shots will not be taken [edit: What "remaining shots"?!]. If the result is still tied after 3 shots by each team the procedure shall continue with a tie-break shoot-out by one player of each team, with the same or new players with the other team [edit: Huh?] starting to take the tie-break shots. The same player can also be used for each shot by a team in the tie-break shoot-out. The game is finished as soon as a duel of two players [edit: A "duel"?  With weapons?!?] brings the decisive result."

That is about as clear as a typical set of tax return instructions.

According to the UK bookmaking sites I checked, Team Canada is still the favorite to win the gold medal in men's hockey.

So, the smart money is still with Canada...and, if I were bettng, I'd bet on Candada, too.

I normally don't watch hockey, but there was nothing else on the tube, so I tuned in.