I think Trump will happily investigate this to death since its really only Democrats/ex-officials at risk here, much like with Weinstein 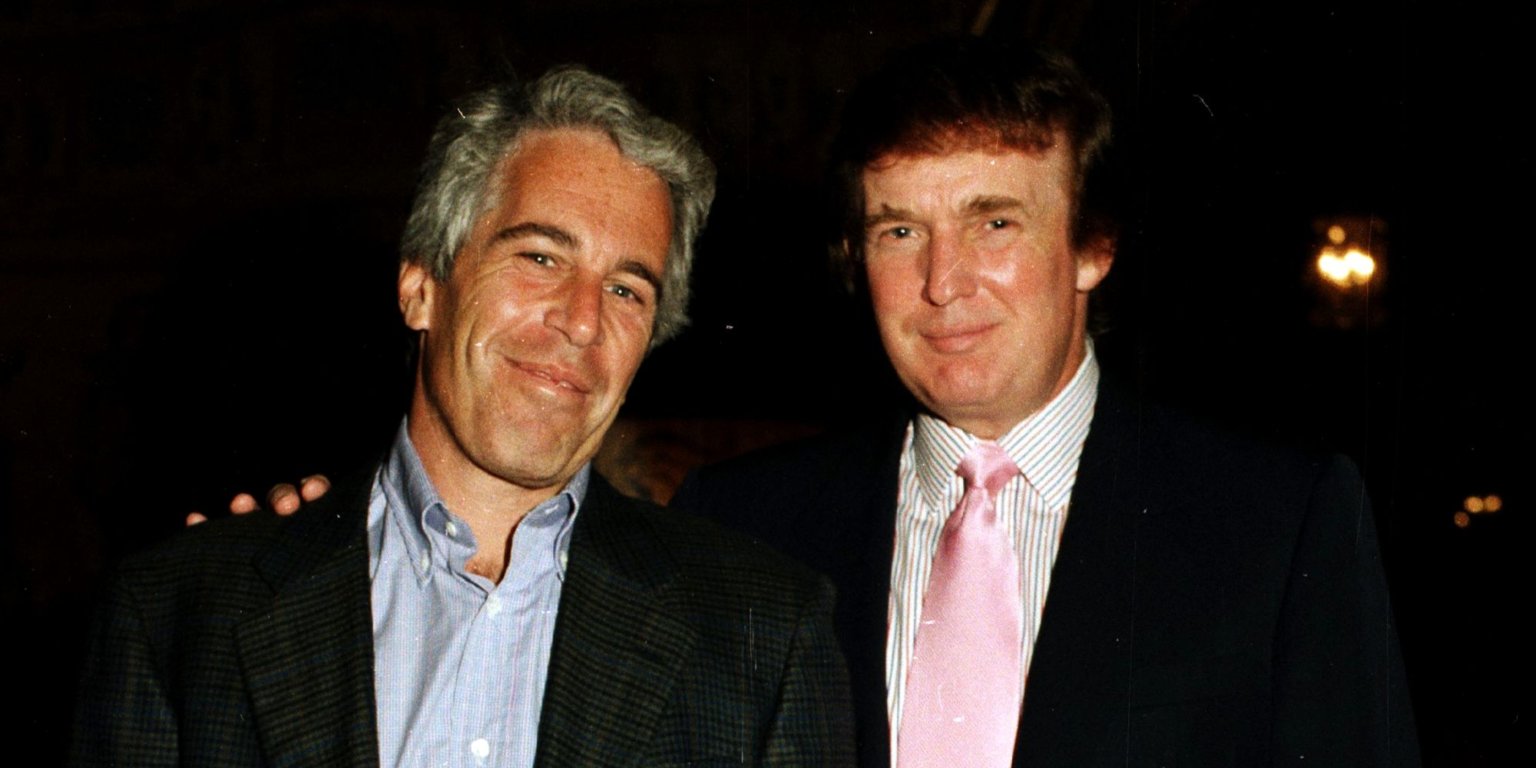 "Jennifer Araoz alleges she was repeatedly sexually asaulted by Jeffrey Epstein at his New York townhouse when she was 14 and 15, including a 2002 rape. Araoz's case represents a new legal liability for Maxwell and other household staff  - a secretary, a maid and a 'recruiter' who Araoz says she encountered outside her high school a few blocks from Epstein's home in the fall of 2001..."

"The Telegraph reported yesterday that Ghislaine Maxwell was planning to 'totally disappear' according to her friends..."

US Media Continues to Downplay Suspicions About Jeffrey Epstein's Death

"...The New York Times and the rest of the major media are particularly anxious and unhappy because their version of Epstein's demise is broadly disbelieved..."

WaPo..."Autopsy finds broken bones in Jeffrey Epstein's neck, deepening questions around his death. Experts say a broken bone happens in suicide by hanging but is more typical in homicide by strangulation."

Epstein: All the Names

"This article about Jeffrey Epstein which makes reference to Ghislaine Maxwell and a 'prime minister' has prompted me to bring together the various names from Epstein's little black book featured in various tweets on CSA into a single thread. Here goes..."

"Epstein was not only a member of the Council on Foreign Relations, but also a donor..."

"Epstein, like Maxwell, was laying the groundwork for Israeli espionage activities..."

A couple of important Gawker pieces of yesteryear on Epstein, good starters for anyone coming new to the issue:

"New York City's medical examiner ruled Jeffrey Epstein's death a suicide Friday, confirming after nearly a week of speculation that the financier hanged himself in his jail cell. Chief Medical Examiner Dr Barbara Sampson said in a statement that she made the suicide determination 'after careful review of all investigative information, including complete autopsy findings..."

Ten Things We Are Asked To Believe About Jeffrey Epstein's Death

"We are asked to believe the following basic 'facts' about the pedophile philanthropist's death, some more credible than others..."

"...Yet the corporate media, led by the New York Times, has denounced all questioning of the circumstances surrounding Epstein's death as baseless 'conspiracy theories'. Epstein's defense lawyers say they did not accept the ruling and planned to conduct their own investigation..."

TRNN: Epstein May Be Just One Part Of An Intricate Network of Sex and Power (and vid)

"Journalist Whitney Webb's series looking at the sordid history tying together mobsters, oligarchs and government intelligence agencies in a web of blackmail, exploitation and profit. 'This is much larger than Epstein..."

The Right Kind of Continuity

" Real-life conspiracies pose a certain challenge for political analysis. Take the case of Jeffrey Epstein, the financier whose indictment in early June has produced revelations shocking even in an age of cartoon villainy. What is there to say about an international pedophilia ring linked to former US presidents and mitteleuropean aristocrats, which operated for decades with near impunity thanks to the prominence of its participants, at the behest of a billionaire whose private plane was named the Lolita Express.

It is likewise awkward for Jews when a Jewish public figure so perfectly embodies an antisemitic caricature. And here too - even with Woody Allen atop the alphabetical list of associates whose names appear in Epstein's leaked little black book, and Alan Dershowitz allegedly availing himself of Epstein's underage girls even while getting him a sweetheart deal in court - it has been difficult to know what to say.

..After all, Epstein's friends also included plenty of prominent non-Jews (Donald Trump, for instance). But two stories that broke last week have turned the Epstein case into a specifically Jewish debacle - not the generic kind an antisemite might dream up, but one rooted in the particular realties of the contemporary US Jewish establishment..."

"His Royal Highness deplores the exploitation of any human being and the suggestion he would condone, participate in or encourage any such behaviour is abhorrent..."

"The corporate-controlled media in the United States has effectively shut down all reporting on the death of the politically connected multi-millionaire sex-trafficker Jeffrey Epstein. This media silence is itself perhaps the most suspicious development in the entire Epstein case..."

"Information has surfaced that infamous pedophile Jeffrey Epstein signed a will two days before his death. This news comes after AG William Barr removed the acting head of the US Bureau of Prisons..."

Epstein's Will Emerges, But Will Victims Get Justice?

"Legal and media analyst Lionel gives his insight on the evolving case of Jeffrey Epstein and the news that the infamous pedophile signed a will just two days before his death. 'This is going to be a Gordian knot..."

From 'Spook Air' to the 'Lolita Express', the Genesis and Evolution of the Jeffrey Epstein - Bill Clinton Relationship

"Far from being the work of a single political party, intelligence agency or country, the power structure revealed by the network connected to Epstein is nothing less than a criminal enterprise that is willing to use and abuse children in the pursuit of ever more power, wealth and control. Gone from corporate media are any hints of the larger scandal, revolving around the admission that Epstein had 'belonged to intelligence'..."

Whitney Webb's conclusion of her 4-part series on the Epstein network.

"Women accusing the late financier Jeffrey Epstein of abuse and sex trafficking have called him a 'coward' at his final court hearing, saying his suicide robbed them of justice. Several dozen accusers attended..."

"Scientists took Epstein's money or associated with the financier after he was jailed for soliciting an underage girl for prostitution. Some say they are sorry..."

"A 72-year-old French modeling agent named in a number of court filings related to the case of Jeffrey Epstein has vanished 'without a trace'..."

Webb: How The CIA, Mossad and 'The Epstein Network' Are Exploiting Mass Shootings To Create An Orwellian Nightmare

"Following another catastrophic mass shooting or crisis event, Orwellian 'solutions' are set to be foisted on a frightened American public by the very network connected, not only to Jeffrey Epstein, but to a litany of crimes and a frightening history of plans to crush internal dissent in the United States."

"Several now censored reports from the 1990s and early 2000s reveal that Prince Andrew's involvement with the minors exploited by Jeffrey Epstein is greater than previously believed..."

"The Southern District Court of New York has asked Prince Andrew to testify in the ongoing criminal investigation into Epstein's alleged accomplices..."

"The Southern District Court of New York has asked Prince Andrew to testify in the ongoing criminal investigation into Epstein's alleged accomplices..."

Yes, despite being searched for, there is no evidence of any contact between Trump and Epstein for many years.

"I've known Jeff for 15 years. Terrific guy. He's a lot of fun to be with. It is even said that he likes beautiful women as much as I do, and many of them are on the younger side."

Yup and check the date on that quote 2002 and since 2004 hes had no contact with him. As I said hes mostly out of this particular issue

Yup and check the date on that quote 2002 and since 2004 hes had no contact with him. As I said hes mostly out of this particular issue

The first police investigation of Epstein started in 2005.

Well thats still after 2003 when they had their breakup

Why does this matter? He had involvement with him.

"Here's how the president was connected to the late sex offender..."

They knew that what he was doing was criminal all along. There was never an "oh my gosh, is this criminal what we are doing?!?"

They paid him to supply them with young girls to rape. There was never any lack of innocence nor criminality to their actions at any time.

Don't disagree. I just believe that it will do Trump no harm as he has an excuse(when I found out what he was doing I broke off all ties but never saw anything myself)  and a host of democrats who cannot say that (not to mention Prince Andrew)

"...Neither documentary however deals at all with Epstein's suspected ties to the world of intelligence. In an interview with Consortium News, former Israeli intelligence officer Ari Ben-Menashe said Epstein did not work with Mossad. 'Military intelligence was who he was working with,' said Ben-Menashe. 'Big difference,' he said... '[Epstein] was taking photos of politicians f**king fourteen year-old-girls if you want to get it straight. They [Epstein and Maxwell] would just blackmail people..."

"Deceased pedophile Jeffrey Epstein directed his best-known accuser to have sex with former Israeli PM Ehud Barak, according to a sealed desposition - one of many papers lawyer Alan Dershowitz is trying to use to clear his own name..."

I read in Wikipedia that Epstein, Trump and Dershowitz were part of the NYC crowd she hung out with in the 1990s.

ETA: Correction made since she only arrived to NYC in 1991.

As well as the Clintons afterwards as well

"Alan Dershowitz has penned a staunch defense of Ghislaine Maxwell following her arrest by FBI. But his touting of her friendship with the Clintons as evidence of her character has left many incredulously scoffing. Dershowitz, who has himself faced accusations of involvement in Epstein's sex ring, explains that he was first introduced to the British socialite by a member of the Rothschild family, and when he subsequently met her, on 'several occasions' she was in the presence of esteemed people 'such as Nobel Prize winners, university presidents, and even Bill and Hillary Clinton. The piece appears to have backfired on Dershowitz as, far from explaining away his connection to Maxwell and Epstein, it sparked a slew of tweets about the subject..."

She could end up dead.

"Liz Franczak and Brace Beldon, hosts of the podcast True Anon, discuss the arrest of Ghislaine Maxwell and the wider Jeffrey Epstein story."

She could end up dead.

Could? Ah ever the optimist

"Imo, with a delay this long before her trial she's going to post bail (nope) or invevitably get 'Epsteined' in prison well before next year." (See thread)

"Ghislaine Maxwell is hardly the only Maxwell sibling to continue her father's controversial work for Intelligence, with other siblings carrying the torch for Robert Maxwell's sizable role in the PROMIS software scandal and subsequent yet related hi-tech espionage operations..."

"The main suspect in the shooting of the husband and son of Judge Salas, overseeing the Epstein-Deutsche Bank case, previously worked for a firm tied to US and Israeli intelligence as well as ties to Deutsche Bank..."