Bless Me Now With Your Fierce Tears XI | Page 3 | rabble.ca

Here is another good eulogy for Richie Haven.

All Power To The People!

A visionary leader and fierce fighter for aboriginal rights.  Rest in peace.

While Harper was sitting as MLA, as opposition member, he made Canadian history in 1990 when had the bells of the legislature ring when he blocked the Canadian constitutional amendment known as the Meech Lake Accord due to insufficient participation, inclusiveness and recognition of Aboriginal people in the proposed constitutional amendment. This constitutional roadblock sent a strong message to all Canadians as a reminder that Aboriginal people need to be included in the process.

During that same year, the Canadian Press voted him Newsmaker of the Year, was awarded the Stanley Knowles Humanitarian Award – an honour shared by Nelson Mandela of South Africa, and was bestowed with the title of Honourary Chief for Life by Red Sucker Lake First Nation. In addition to those honours he received the commemorative medal of Canada from the Governor General for his dedication and commitment as a public servant and continues to earn honours and accolades for his work.

I'm very shaken, not only to have lost this key figure in Indigenous struggles, but also by how relatively young he was. There is a huge gap in life expectancy between Aboriginals and non-Aboriginals.

I'm sure this will get its own thread.

Henry Morgentaler survived the genocidal horrors of Nazi atrocities at Dachau to become a pivotal figure in the struggle for the reproductive rights of women. For that, he earned the endless venom and hatred of misogynists across the country and outside Canada.

Indeed. One of the last survivors of the Warsaw Uprising also died recently, in Montréal. Like Morgentaler, he was of a Bundist background. I've sent condolences to old friends who worked more directly with him in the most difficult times.

As the article implies, he was an important hero ... but also a bit of a shit to women in his life. I feel very sad, I was involved mostly in the Chantal Daigle fight - of course I supported the earlier fight in Montréal, but was involved more in union organising and urban ecology... But glad as hell I never became romantically involved with him.

Indeed. One of the last survivors of the Warsaw Uprising also died recently, in Montréal. Like Morgentaler, he was of a Bundist background. I've sent condolences to old friends who worked more directly with him in the most difficult times.

As the article implies, he was an important hero ... but also a bit of a shit to women in his life. I feel very sad, I was involved mostly in the Chantal Daigle fight - of course I supported the earlier fight in Montréal, but was involved more in union organising and urban ecology... But glad as hell I never became romantically involved with him.

Rabble re-posted a piece by Judy Rebick, earlier this year, about this monumental struggle:

By the way, I can't seem to erase my duplicate post, above.

Quote:
The pro-choice movement was the broadest and most successful social movement I have ever seen in Canada. And while access to abortion is still not universal and back bench Conservatives have tried over and over again to re-criminalize abortion, that victory has stood the test of time. Today Canada is one of the few countries in the world to have no legal restrictions on abortion and women have the right to reproductive freedom, a foundational right for women's equality.

When we honour the late Henry Morgentaler we also celebrate a great victory. And that's good for the left to do. 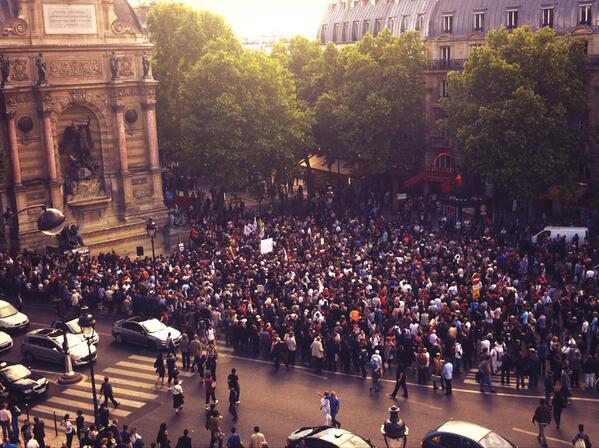 Online, I posted about Clément Méric and there wasn't a single reply. I admit I was a little pissed off. Yes, of course there is more violence in Turkey, Hungary and countless other places, but all the fascistic and homophobic shit going on in France was building up to this kind of horror. (Note, Méric was white and there was no evidence that he was gay - he was just against all that shit).

I will truly mourn the passing of Iain Banks. Since discovering his first novel shortly after its initial release, I have made every effort to purchase each of his subsequent books within the week (if not always on the actual day) they became available for sale in Canada. I love both his general fiction and his science fiction, not least because he is one of the few authors whose concept of what was "normal" was both pragmatically socialist and emphatically secular. I wish I had had the chance to help him research his book on scotch, Raw Spirit, not least because I am certain not all his best tales made it into print. I will definitely be raising one in his honour tonight.

James Gandolfini. Way too young at 51.

Tony Koulakis, owner of Cosmos diner in NDG. I used to eat there many mornings a week when I was taking classes out at Loyola. And as I said on EM, 86 years old, been smoking heavily and eating supremely greasy and high-cholesterol foods for probably 70 of those years, and how does he go out? Murdered by his brother...

cco wrote:
Murdered by his brother

I remember watching the documentary about him years ago.

Other local media say the murder suspect was his son, which makes more sense in terms of age differential.

Oh, I guess the phrasing:

CBC wrote:
Nikos Koulakis, one of Tony's sons, has identified the suspect in the homicide investigation as his brother Yannis, also known as Jonny.

Peggy Seeger, Pete's younger sister, wrote a song inspired by Toshi and by other women on her path called "Left Wing Wife":

My husband isn't home he's gone out to save the world
The oppressed the underprivileged the exploited and the needy
If you see him tell him "come on home,
His dinner's ready"

(on edit)just looked through that link and discovered that, among many other things, it was Toshi who taught Pete how to sail-thus playing a direct role in his eventual decision to create the Clearwater Foundation(in which she also played a major and largely uncredited role...she was usually uncredited by choice, btw, being a person who didn't like to be in the spotlight).

I happened to encounter her and Pete by accident one day walking along Charles Street in Toronto. I'd just gotten out of the subway at Museum and was heading east when this large crowd surged out of the Bader Auditoreum.  Pete came  up to me, thinking apparently that I was an organizer of something because I happened to be on the street first. He said, "Where do we get the food?"  I had been raised in an left-wing home in the 40's, and all my family revered Pete and his singing crowd ever since.  I didn't know where the food was, and I was gobsmacked that I had run into this monumental figure of my childhood, and that he had started talking to me, so I said, "Mr. Seeger, you've been a hero and inspiration to me all my life."  That didn't impress him at all, and so I said to Toshi beside him who seemed to be the aware one, "I guess he's been hearing that a lot today," as I at that point realized that he was coming out of some gathering of folk, and other, singers. She agreed that my mere fan babble was of no interest and continued on to find the food.

Unfortunately I don't know of the important role she had had. And as Ken said, she was uncredited by choice, so would probably not have interested had I thanked her as well. Even in those few seconds she impressed me with her great strength.  ﻿﻿

From Turn, Turn Turn, "a time to mourn."

Great story about Toshi, WillC. Thanks!

Just finding out ow about Cosmos! Wow! Montreal gets all the drama...

While the Straight does not write about it, Sister Elizabeth also stood in consistent opposition to war and occupation. Rest in peace.

Quote:
With the Velvet Underground in the late Sixties, Reed fused street-level urgency with elements of European avant-garde music, marrying beauty and noise, while bringing a whole new lyrical honesty to rock & roll poetry. As a restlessly inventive solo artist, from the Seventies into the 2010s, he was chameleonic, thorny and unpredictable, challenging his fans at every turn. Glam, punk and alternative rock are all unthinkable without his revelatory example. "One chord is fine," he once said, alluding to his bare-bones guitar style. "Two chords are pushing it. Three chords and you're into jazz."

Michael Mandel, age 66. I can't find a biography adequate to his activism and passion.

But I don't really care that he's dead. I can't figure out if that's because he died years ago, or if he's really just having a laugh. Not really dead, only kind of sore of tummy.

Michael Mandel, age 66. I can't find a biography adequate to his activism and passion.

So sorry to hear this. What a fire of a fighter. With a great left hook of a legal fist too. RIP Mike. Condolences to family friends, colleagues students and comrades. Now go do what he taught ya!

Well said, NDPP. And I found a worthy bio:

Quote:
York’s flags are flying at half mast to mark the death of law Professor Michael Mandel, who taught at Osgoode Hall Law School for 39 years. He died Oct. 27 at the age of 65.

Being probably my favourite writer, I was saddened to hear of her death. When I read The Golden Notebook in my early 20's, like many women I found it to be a revelation. It spoke to me in ways no other work of fiction ever had. I'm especially fond of her future fiction series The Canopus in Argos Archives. Amazing writer. Amazing career.

Muñoz's work was foundational to studies of race, gender, and sexuality

So handsome and charming, and with a wicked sense of humour:

[quote=Caissa]It is with profound and great sadness that I report that Canon Tony "Boom Boom" Hitsman died on December 18. My understanding is that he will be buried in his beloved Kegaska. My life was enriched by knowing Tony and it now has a hole in it. RIP, Tony.

The Diocese of Quebec mourns the passing of one of its clergy, the Rev. Canon Tony Hitsman. Born Anthony William Hitsman on October 5, 1949 and ordained June 8, 1990, Tony served in the Diocese of Quebec in a variety of capacities. He will be sorely missed.

The funeral will be held at St. Phillips, Kegaska, Saturday December 21st, presided over by the Rt. Rev. Dennis Drainville.

Please keep the friends and family of the Rev. Canon Tony Hitsman in your prayers this Christmas season.