Auditor Generals' Report on Climate Change Show Governments Will Blow Past Emissions 2020 & 2030 Targets with no Plan to Adapt | rabble.ca

The Auditor Generals of nine of ten Canadian provinces (Quebec did not participate) decided to look at a critical issues for Canada's future. They decided the number one priority issue that needed to be examined first was climate change. Together with the Federal Commissioner of Canada that have released a report today on whether the federal and provincial governments are going to meet their 2020 and 2030 targets carbon dioxide emission targets and their plans to adapt to climate changes that are already occurring.

Despite the warnings coming from forest fires that burnt down large parts of Fort MacMurray in 2016, the forest fires that caused tens of thousands to abandon their  communities in BC during the 2017 summer due to forest fires that were in some cases larger than Prince Edward Island, the extensive spring flooding in recent years due to extremely rapid melting of snow and ice in Alberta, Ontario and Quebec,  the destruction of forests by pine beetles, the dramatic changes in the Arctic climate and many other effects, the report concludes that our governments have virtually no possibility of meeting 2020 targets and are unlikely to meet 2030 targets, just as they have failed to meet such targets in the past set out by the Chretien Liberal and Harper Conservative governments. They also have either no or completely inadequate plans to adapt to the changing environmental conditions created by climate change. The plans that do exist have no common standards and no mechanisms of coordination.

When asked on Power and Politics, what consequences governments would face for not meeting the 2020 targets, Liberal Environment Minister Catherine McKenna evaded answering the question again, again and again. In other words, the message is: don't worry, we've got this problem under control. Go back to sleep.

Provincial governments of all political stripes have failed to deal effectively with the crisis.

The Conservatives solution is for the federal government to get out of the way and let the provinces deal with the problem. I'm sure Jason Kenny, Brad Wall, Scott Moe, and Doug Ford would agree with that.

Neither the federal government nor the provinces have adequately assessed the risks a changing climate poses to the country and have no real idea how to adapt to it, concludes a scathing new audit released Tuesday.

It says while many governments have high-level goals to cut emissions, few have detailed plans to reach those goals, such as timelines, funding or expected results from specific actions.

Assessments to adapt to the risks posed by climate change have been haphazard, inconsistent and lacking in detail, with no timeline for action and no funding, the report notes.

It also calls Canada’s emissions goals a hodgepodge of targets, with no consistency in how emissions are measured or whether cuts will target overall greenhouse gas outputs or just those from specific economic sectors. Only two provinces and Ottawa have actually laid out their specific 2030 emissions targets, and none are on track to meet them, Gelfand said.

The auditors say that means there is no clarity on how Canada and the provinces and territories are going to measure, monitor and report on their contributions to meeting Canada’s international commitment to cut emissions by at least 30 per cent from 2005 levels by 2030.

As of 2015, the most recent year for which full statistics are available, Canada was nearly 200 million tonnes short of that goal, the equivalent of the emissions produced by about 44 million cars each year — twice the number of vehicles registered in Canada. ...

“We’ve had several plans in the past and yet our emissions keep rising, we do not hit targets and we’re not ready to adapt to a changing climate,” Gelfand said. ...

Canada has had at least four international emissions targets in the past, and as many as eight plans to meet them, but has yet to do so once, said Gelfand, who plans to audit the pan-Canadian framework in the next couple of years. That audit will start no earlier than 2019, and will take about 12 to 18 months to complete, she said. ...

Conservative environment critic Ed Fast seized on Gelfand’s report as proof the government doesn’t have a grip on climate change, nor evidence to back up its carbon-pricing efforts.

The Liberals should abandon that plan and leave it to the provinces to decide on their own how best to cut emissions, said Fast, while Ottawa can focus on funding research into how Canada’s geography or agricultural practices can be used to reduce emissions.

If the world doesn’t meet its emissions targets to keep the planet from getting too warm, everyone will pay the price, said Catherine Abreu, executive director of the Climate Action Network. “We just don’t get to live in a way we’re used to if that happens,” she said. “We are already seeing devastating harm from climate change.”

Here is the url for the "Perspectives on Climate Change Action in Canada—A Collaborative Report from Auditors General—March 2018" report.

BC provincial auditor Carole Bellringer says the province "has no clear plan to prevent threats such as wildfires, flooding and drought as it works to adapt to the risks posed by climate change, the province's auditor general says." The BC Environment Minister agrees. After 16 years of BC Liberal government inaction in this regard, he plans to develop a plan to deal with this. However, it remains to be seen whether it can successfully incorporate the recent government proposal to provide tax subsidies for a LNG facility into such a plan.

Carol Bellringer says there is little monitoring of progress and reporting on performance involving the ministries of environment, agriculture, transportation, forestry and housing, as well as Emergency Management B.C.

The province may not be able to manage flood risks because roles and responsibilities are spread across many agencies and levels of government that could lack staff or technical capacity, Bellringer said in a report released Thursday.

British Columbia has not completed a comprehensive risk assessment, she said, adding that's a crucial step in adapting to climate change because it provides decision makers with clear information for allocating funds and planning for the future.

"A robust, prioritized, publicly available risk assessment can help ensure that all government ministries and partners are clear about which risks exist and which are the most critical to mitigate," Bellringer said.

She made 17 recommendations, including that the government provide the public with an overview of key risks and priorities and create a plan with facts on timelines and how First Nations will be involved. ...

Meeting future emission reduction targets will be partly dependent on the size of the liquefied natural gas industry that develops in the province." ...

Bellringer said local government are on the front lines of the effects of climate change, but a lack of financial support, reliable data and provincial policies create challenges. ...

"We agree with the auditor general that the legislated 2020 emissions reduction target won't be met," he said in a statement.

"This is why our government will introduce a new legislated target for 2030 of a 40 per cent reduction in carbon emissions below 2007 levels.

The province is also increasing the carbon tax by $5 per tonne a year, starting April 1, and Heyman said that will help to meet both the new 2030 target and the 2050 target of 80 per cent below 2007 levels.

Saskatchewan's approach to dealing with climate change has been singled out in the Auditors' report.

Saskatchewan has been called out for falling short in several areas when it comes to fighting climate change. ...

The general consensus of the report is that there is no consistent method between provinces to measure and report on greenhouse gas emissions. This makes it difficult for Canada to report on its pledge to reduce emissions by at least 30 per cent below 2005 levels by 2030. ...

Of the 12 provinces and territories that were part of the report, seven — including Saskatchewan — did not have a target for cutting greenhouse gas emissions by 2020.

The plans of eight provinces and territories did not include details such as timelines, detailed implementation plans, and cost estimates, the report said.

Saskatchewan and the Northwest Territories, however, did not have a strategy, according to the report.

At the time of the report, the province's Ministry of Environment also had not completed an assessment related to climate change risks, as it was in the process of gathering information from other government agencies. ...

Relative to the emission numbers in 1990, Saskatchewan's have increased by over 50 per cent. 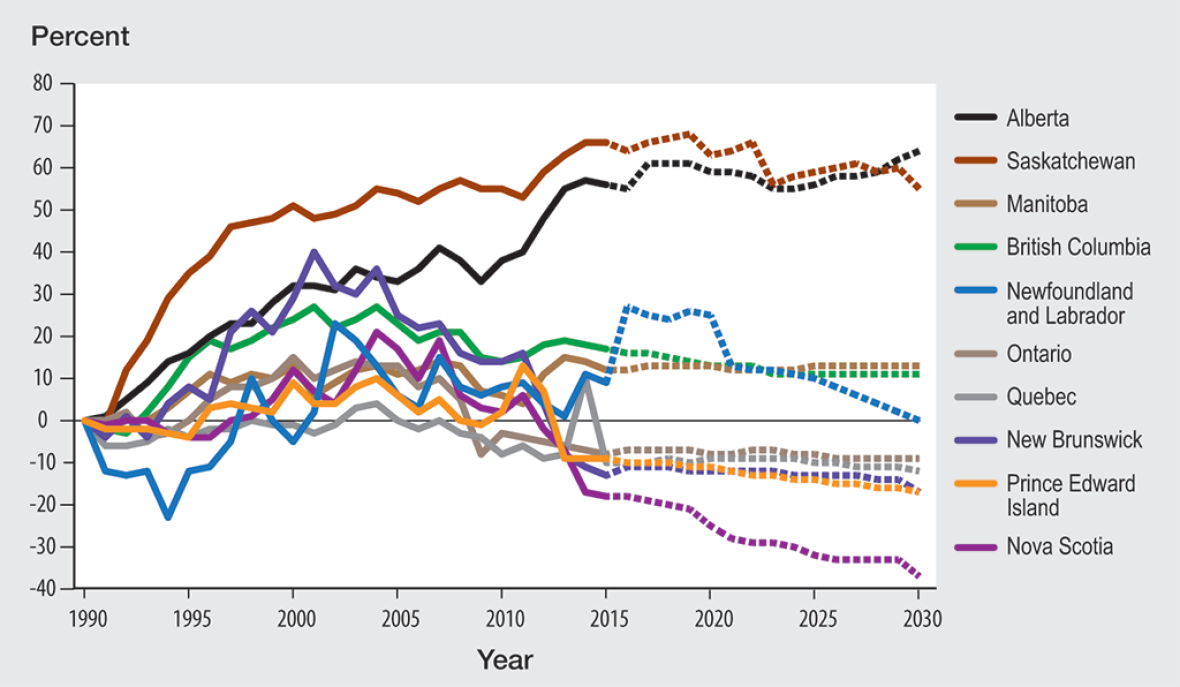 A graph showing the provinces and their increases or decreases in greenhouse gas emissions relative to their emissions in 1990 through to 2015. The dotted lines are predictions. (Office of the Auditor General of Canada)