What is it going to take for Canada to have a First Nations person as Governor-General?

Yes, let's hire another prominent and highly paid Indigenous collaborationist to appease liberal settler guilt and sign their governments' crooked, neocolonialist laws and policies on behalf of the usurping and genocidal Crown.

Here's something that should be insisted upon by anyone contemplating voting for any politician in any upcoming election:

'I took a look at Canada's hansard and found that MPs mentioned 'Israel' 60 times since Sept, ~ 75% in a positive context. China was mentioned 1,235 times (overwhelmingly critical). "

If neither the NDP or Liberals vote on the budget and the Cons and Bloc vote against it that will leave the fate of the government up to the 5 independents.

After reading this report which everyone should read by-the-way, as it is written by Crawford Killan, one of the best journalists in Canada, I gather we won't be having an election anytime soon.

They have Sweden ranked 37th of 98 countries (just slightly behind Norway, Finland, and Denmark).

Tests per thousand people: Sweden ranks 44th out of 219

Confirmed Deaths Per Million (not mentioned in the article, but on their website): 196th out of 219 countries

Confirmed Cases as a % of Total Tests: The number for Sweden is over 10%, much higher than even the U.S. and U.K., let alone Canada, France , and Germany (all countries ranked much lower than Sweden)

If neither the NDP or Liberals vote on the budget and the Cons and Bloc vote against it that will leave the fate of the government up to the 5 independents.

Sorry I should have said NDP or Greens not LIberals.

Liberal numbers continue to slide for COVID mismanagement and other things, like this...

Liberal numbers continue to slide for COVID mismanagement and other things, like this...

It would he great if this impacted the Liberal numbers but is there any evidence it is?

Justin Trudeau's Liberals continue to hold a lead over Erin O'Toole's Conservatives, as support for the two parties remains static in national polling. Though the Liberals' five-point lead isn't particularly wide, their advantages in Ontario and Quebec still potentially put them in majority territory. Support for the New Democrats has ticked up in recent weeks, while the Greens and Bloc Québécois have about as much support as they did in the 2019 federal election.

I wouldn't ordinarily post this here since I posted elsewhere; however because the last couple of posts referred to recent party poll numbers, here they are:

In the time between last six polls on Wikipedia (between January 30th and February 14th) and the above Ekos December 2nd poll, the average of the six most recent polls shows the Cons have dropped 2.0%, while the NDP is the only party that has significant growth (up 5.8%).

Trudeau and big pharma: Not a love story

Event / Previous Election / Most Recent Poll / Change is in the Air!

What Will Canada Do to Fix Its Senior Care Fail?

All of the sad stories emerging from long-term care homes are “appalling” for federal NDP Leader Jagmeet Singh.

Earlier this month, the New Democrats unveiled a plan “to fix Canada’s broken long-term care system” that would aim to shift “all for-profit care to not-for-profit hands by 2030.”

“Not a cent of public money should go toward a company trying to make a profit,” Singh told The Tyee.

The NDP’s strategy takes aim at three major for-profit operators — Extendicare, Sienna Senior Living and Chartwell Retirement Residences — which, according to a Toronto Star analysis, collectively paid out nearly $171 million to shareholders in the first three quarters of 2020 while receiving $138.5 million in provincial and federal wage subsidies tied to the pandemic.

At the time the story ran in late December, more than 480 residents and staff members had died of COVID-19 at facilities owned by Extendicare and Sienna in Ontario alone. The death toll at Chartwell was 281 residents across the country. 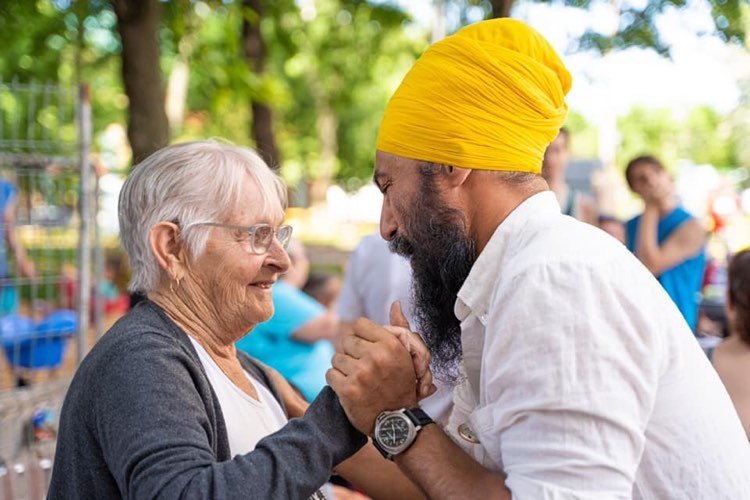 Federal NDP Leader Jagmeet Singh communing with an elderly woman before the arrival of the pandemic. His party unveiled a plan ‘to fix Canada’s broken long-term care system’ that includes shifting ‘all for-profit care to not-for-profit hands by 2030.’ Photo: supplied.

Singh said that ending for-profit-run homes would not be unlike the discontinuation of for-profit hospitals following the introduction of universal medicare in 1966. His first target would be to make public long-term care facilities owned by Revera Inc., a wholly owned subsidiary of a Canadian Crown corporation. “That can happen overnight,” said Singh, noting Trudeau managed to nationalize the Trans Mountain pipeline “with the snap of a finger.” (The change-in-ownership process took three months.)

Singh explained that a national task force would create a plan to phase out other for-profit care homes across the country and establish national regulations based on the five pillars of the Canada Health Act: public administration, comprehensiveness, universality, portability and accessibility.

The task force would also work with the provinces and territories to set national standards for staffing, pay and working conditions. This “would inherently push out for-profit, because you can’t make a profit if you’re actually caring for people the way they should be cared for,” said Singh. “Cutting corners with staffing has been shown to be the leading cause in the horrible conditions.”

Canada’s top doctor’s COVID-19 report zeroes in on inequality and policy cures. Will we act?

The NDP are closing in on the Conservatives, and are now within 5% of second place in the most recent polling. Not too shabby! At this rate, it looks like the NDP may become Canada's Official Opposition once again.