NDP Leader Jagmeet Singh has successfully moved a motion calling on the Senate to pass legislation harmonizing Canadian laws with the UN Declaration of the Rights of Indigenous Peoples (UNDRIP) and requiring sexual assault training for judges.

This certainly creates an opening for the NDP.

The Liberals' about-face on refugees, hidden away in an omnibus bill, saws at a pillar of their core identity, to say nothing of their brand promise 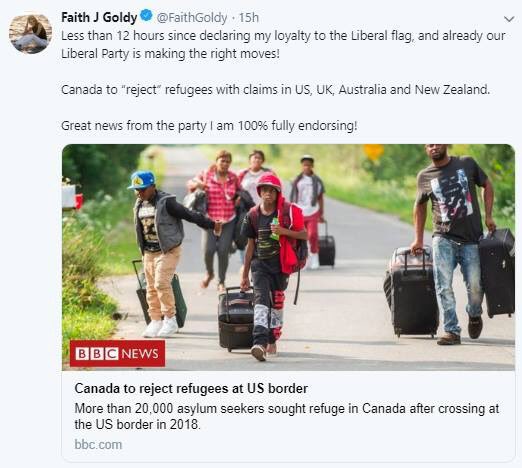 So basically, Goldy endorsed the Liberals just to stick it to Justin?

Ken, isn't that what they call a false flag?

Don't look a gift horse in the mouth NDPers

Loblaws refrigerators the wrong place to shop for votes

If @theJagmeetSingh wants to replicate 1972 all he has to do is start talking about "corporate welfare bums"!!

If @theJagmeetSingh wants to replicate 1972 all he has to do is start talking about "corporate welfare bums"!!

He needs to find a different phrase, though-as others pointed out on this board several years ago(I think it was this board) the problem in David Lewis' slogan was that it implied that it's valid to see people on public assistance as "bums".   "Corporate Freeloaders" or "Corporate Slackers" or maybe we could go back to good ol' "exploiters" or borrow FDR's phrase "the malefactors of great wealth".

It's important to challenge the rich, but it's also important to do so without validating public resentment of the poor.

Every year the government spends millions on the evacuation of Kashechewan. This year could be catastrophic flooding. There was no money in budget to follow through on promise to begin the move to higher ground.

Across Canada people are making impossible choices every day between paying for things like rent & food or filling their prescription – it doesn't have to be this way. Our plan for #Pharmacare for all will save you money & make our communities healthier:

NDP's Jenny Kwan would be an excellent Minister of Immigration

Trudeau government panders to fears of an invasion of refugees

I attended this very interesting Summit. I came away with a sense that the CLC and other groups from the imperial nations of the North were not listening to the voices of the grass roots leaders from the South that would be on the receiving end of a new trade deal regime and were pushy in trying to get statements supporting the concepts embodied by APEC.

My wife was at the Women's Conference and she was appalled at the way her sisters in the Canadian union movement, especially some of the CLC women executives, patronized the women from the south, many of whom were indigenous.

The big issue was whether APEC's trade agenda could be tweaked to make it a beneficial process for working people. The CLC execs that were there pushed very hard for reports from the Summitt that included the benefits of the idea as long as labour rights and human rights were included. The women from communities that would be affected by our ruthless Canadian corporations were insisting that the whole process had to be vigorously opposed.

In November 1997, 1000 people gathered in Vancouver to participate in the 1997 People's Summit on APEC. Women, youth, indigenous peoples, workers, journalists, people of faith, and community activists; representatives of unions, non-governmental, environmental, church, labour and community organizations from the South and the North gathered to challenge APEC’s* business-driven agenda and give voice to the concerns of civil society.

Hmm, we were at the same summit then. And we came away with much the same impression.

But then the People’s Summit was partly funded by the Cdn government, and some Vancouver NGOs left its organizing committee (controlled in Ottawa) to form the No! To APEC coalition. http://archive.macleans.ca/article/1997/11/17/the-trade-contrarians

NDP Leader Jagmeet Singh speaks with a reporter outside the Fogolar Furlan Club in Windsor Saturday, April 13, 2019. While in town, Singh called for a national auto policy. TAYLOR CAMPBELL / WINDSORE

Federal NDP Leader Jagmeet Singh amplifed his call for a national auto strategy during a weekend visit to Windsor, on the heels of FCA Canada’s recent news that the third shift is being cancelled at Windsor Assembly Plant.

Returning the plant to a traditional two-shift operation starting Sept. 30, after running three shifts since 1993, will potentially cost 1,500 jobs, not including hundreds more at area feeder plants.

“The motivation behind wanting to re-announce our desire for a national auto strategy came out of the fact that the Liberal government put in place an incentive to purchase an electric vehicle,” Singh said Saturday, referring to the up to $5,000 rebates for electric vehicles that didn’t initially apply to the Pacifica hybrid made at Windsor Assembly.

“That incentive neglected the single vehicle that’s made in Canada — that’s proudly made here in Windsor.”

After FCA’s March 28 announcement of future job losses, Minister of Innovation, Science and Economic Development Navdeep Bains then announced that the Pacifica would be included in the rebates. Singh said it took pressure from union leaders, activists and the NDP to convince the government a mistake had been made.

Don’t try to read between the lines that this tweet implies anything about my own political decisions. This is simply to say that it takes guts to describe painful personal experiences like this. Speaking up will help others to fight stigma & find healing.

Jagmeet with hundreds of thousands attend the Vaisakhi parade today

Hey swallow - please don't interrupt NorthReport's flow. Once he posts something, he's on to the next something.

it's an excerpt from his book detailing how racist bullying lead to his being sexually abused by his martial arts instructor.

i may actually read this book.

Very annoyed about being paywalled. I certainly hadn't looked at the Star before, this month. They used to allow a few free articles.

Very annoyed about being paywalled. I certainly hadn't looked at the Star before, this month. They used to allow a few free articles.

Yes -- I feel the same. I wonder how well this paywall stuff works. Do enough people pay to make up for the reduced advertising exposure? I guess they must think so.

You used to be able to open Star links in a "private" or "incognito" window, but no more, and no more X free articles per month, either.

Amusingly, though, if you have the Star app on one of your devices, it still works fine, and loads all articles.  I have a sneaky suspicion that a purported "update" to that app might introduce the paywall, so I've avoided updating that one.

The Globe takes a different approach:  some of their stuff is paywalled and some isn't, even on their app.  As it happens, the stuff that's paywalled tends to be opinion, editorial and business stuff -- the stuff I don't really have any interest in anyway.

The Globe takes a different approach:  some of their stuff is paywalled and some isn't, even on their app.  As it happens, the stuff that's paywalled tends to be opinion, editorial and business stuff -- the stuff I don't really have any interest in anyway.

You're not into the opinion stuff? Interesting. From the time I started reading newspapers in junior high, it was the editorials and columnists that I always read first, and probably most frequently. I think that was sort of how I got my basic news, and had to cajole myself into reading the actual articles.

Nowadays, I think I've sort of trained myself to at least scan through the news sections before hitting the opinions. Like you, I've never been much into the business section, though some of my friends on the left insist that it's the best way to find out what's really going on(since capitalists are unlikely to lie to each other about the economy).

it's an excerpt from his book detailing how racist bullying lead to his being sexually abused by his martial arts instructor.

i may actually read this book.

Thanks quizzical. How horrifying.

Meanwhile BC with the #NDP has a triple A credit rating, the lowest unemployment in Canada a balanced budget with a small surplus. Conservatives prove once again they are not fit to run an economy.

Unbelievable. So top priority forTrudeau government is not housing, not climate action, not national pharmacare, not better public transit, but TMX pipeline that will double tanks on Burnaby Mountain, huge increase in tankers. Madness @TerryBeech? #cdnpoli

Too many Canadians are working hard but struggling to get ahead with higher costs – and yet rich corporations & Liberal donors are the ones with a direct line to the PMO. We need a government on the side of people, not wealthy (and American) corporations.

How a movement became a moderated, modernized party

NDP to withhold $ from provinces that refuse abortions

So what's the NDP position on this?

Why not an NDP-Green-Liberal coalition to battle the climate change crisis?

I think the New Democrats and the Liberals better worry about the surge in Green support. I am seeing it all around me, including family members who were either staunch NDP supporters or habitual Liberal supporters.