Singh sees Quebec as ‘fertile ground’ for the NPD

It's damn well time to start planting the seeds, then.

We Are Living in a Growing Corporate Dictatorship’

A Q&A with Leah Gazan, the ‘fearlessly progressive’ Indigenous socialist running for the NDP this fall.

How the New Democrats will create 300,000 new Green Jobs

North, are you going to change the title of this thread every time you make a new post, now?

Liberals are just jealous the NDP beat them to it

And a word about the CBC: I enjoy them immensely when they do things like Ideas today with Linda McQuaig & Desmond Cole but they end up destroying their own credibility with this kind political smear on behalf of their Liberal err anonymous political  masters

Could you please pick a thread title and stick to it?

May, Singh & Trudeau together at yesterday's Vancouver Pride:

Odd looking photo. I'm not sure who comes off best.

How many flakes and loose cannons will be running for the NDP this time?

Kind of a catchy phase

Come on Jagmeet, hit these scum bag Liberals where it hurts as SNC Lavalin is despicable

Is this SNC joined at the hip with the Trudeau Liberals the kind of government Canadians want?

The Labour Movement in BC took SNC to the Human Rights  Tribunal in BC and won the largest human rights settlement in Canadian history for the Costa Rican workers. Do a little research and find out what the Trudeau Liberals are really all about, eh!

Those corrupt assholes seem to own BC Hydro and its absentee government owners as well. Site C and LFG are SNC's claws in the provincial purse and the building trades are cheering it on. I wish it was only the Conservatives and Liberals that were captured by our corporate elite.

Why Singh says he won’t work with the Tories

Rather than a tactical blunder, Singh's comment may simply be an attempt to position the party to advantage in the pre-election jockeying

Just wish the NDP had 100 candidates like Linda McQuaig, instead of the many of its usual flakes like Weir and Moore, Ryan, etc. Once the election is over, with hopefully a minority government, Singh's number one issue should be to get the team focused on the next election.

Denounced in media, taxing the super-rich turns out to be popular with Canadians

Please chip in to support rabble's election 2019 coverage. Support rabble.ca today for as little as $1 per month!

The Onion magazine once sardonically described the gap between rich and poor as the Eighth Wonder of the World -- "a tremendous, millennia-old expanse that fills us with both wonder and humility… the most colossal and enduring of mankind's creations."

Another aspect of the rich-poor gap that fills me with wonder is the way the rich manage to keep it off the political agenda, although that may be changing.

Prominent U.S. Democratic presidential contenders Elizabeth Warren and Bernie Sanders are campaigning on taxing the super-rich, with Warren calling for a two per cent annual tax on wealth above $50 million, rising to three per cent on billionaires.

In Canada, where politicians have shied away from even putting their toe in the water when it comes to taxing the rich, NDP Leader Jagmeet Singh has taken a bold plunge, calling for a version of Warren's tax -- an annual one per cent tax on wealth over $20 million.

This is an excellent idea, and is apparently popular. A new Abacus poll shows that 67 per cent of Canadians support (or somewhat support) a wealth tax, along the lines proposed by Warren, and that even a majority of Conservative voters support it. That's probably about the same percentage of Canadians who support (or somewhat support) Mother's Day.

Yet the wealth tax has received little media coverage -- beyond denunciations in the National Post, which surely has nothing to do with the fact the media is largely owned by billionaires.

One Post columnist posed the bizarre question: what is the problem to which creating a wealth tax is a solution?

Fortunately, the brilliant French economist Thomas Piketty answered that question at length in his celebrated international best-seller, Capital in the 21st Century, where he made the case for wealth taxes.

Without them, he argued with extensive data, wealth will become ever more concentrated, allowing the mega-rich to swallow up an ever-larger share of the world's resources.

Given that 26 individuals now have as much wealth as the bottom half of humanity (3.8 billion people), one wonders at what point conservative commentators might consider this a problem. What if one individual had as much as the rest of humanity -- or if she had all the world's wealth? Would that cause alarm at the Post?

A wealth tax would redirect a tiny fraction of those fortunes back to the community to help ordinary Canadians. I'd call that a good solution to the problem of millions of Canadians working really hard but still struggling to get by.

A wealth tax would also help curb the enormous political power of the super-rich. Fossil fuel billionaires, for instance, have effectively managed to block global efforts against climate change.

Billionaires and their defenders maintain the super-rich would find ways to hide their money from tax authorities. But then why do billionaires resist such taxes? Because they know they would actually pay more -- just as they did in the early postwar years, when taxes on the rich were much higher.

Piketty notes that Warren's wealth tax is in line with historically high U.S. tax rates on the rich. He maintains those higher rates were key to the strong economic growth from 1940 to 1980 -- before Republicans gutted taxes on the rich, slowing down growth and swelling family fortunes.

The Canadian tax system also helps perpetuate dynastic fortunes. Canada is the only G7 country without an inheritance tax.

According to a study by the Canadian Centre for Policy Alternatives, between 2012 and 2016, the net worth of Canada's wealthiest 87 families grew by more than $800 million -- per family.

The study also found that inheritance is growing in importance. Among the wealthiest Canadian families, 45 per cent had passed down wealth at least one generation in 1999, compared to 53 per cent in 2016.

So much for the argument that the super-rich are increasingly self-made entrepreneurs.

Turns out that Canada's billionaires are mostly winners in what Warren Buffett calls the "ovarian lottery." They just think they hit a triple.

Linda McQuaig is a journalist and author. Her book Shooting the Hippo: Death by Deficit and Other Canadian Myths was among the books selected by the Literary Review of Canada as the "25 most influential Canadian books of the past 25 years." This column originally appeared in the Toronto Star.

Jenny Kwan: An urgent response to the housing and homelessness crisis and overdose crisis is needed

NDP leader said he would never prop up a Conservative government

In the last minority Liberals supported the Conservatives so many times Canadians lost count, rather than work with the NDP

NDP leader Jagmeet Singh told reporters on Friday after a meeting with Quebec City Mayor Regis Labeaume that the two discussed their plan to tackle social injustice, a better healthcare system and the climate crisis.

Ever try getting a campsite?

Canada could easily use double its number of national parks

Jagmeet Singh wants a new National Park Reserve in the South Okanagan-Similkameen to go ahead, and is concerned about the serious delay of the project.

Which rich people, supporting the Trudeau Liberals, as well as the other right-wing parties, are holding this up?

Finally some progressive left-wing policies which most voters want, even if they don’t quite realize it yet But pound away steadily on these themes for five-six weeks and then we shall see.

I saw Singh during this morning’s presser and he was excellent particularly with the appropriate answers to Canada’s right-wing media who were constantly trying to trip him up. Worth watching!

Just watched Singh at another one of his successful pressers today. It seems like the Liberals and the CBC, the Star, etc., their fans in the media, have sold Canadians a bill of goods about Jagmeet who actually comes across as intelligent, articulate, and compassionate. Go figure

The NDP have pulled away from the slumping Greens, so can the NDP now catch up to the Leaders? 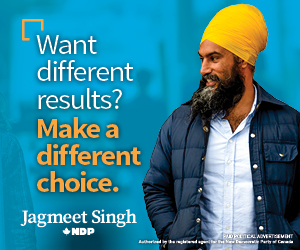 Unifor backs the NDP in Windsor