Flag to be wrapped in new law

Hey.... I think you just gave me a way to beat the zoning restriction to building my 20-foot fence so I can hang out naked in my back yard.

All I have to do is wrap myself in the flag, so to speak. Thanks!

[url=http://parl.gc.ca/HousePublications/Publication.aspx?Language=E&Mode=1&D... C-288[/url] would allow a court to sentence an offender to as much as two years in prison.

An "offender" in this case is not a person who descrates the flag - this bill does not prohibit desecration of the flag.

And no, that's not a typo. It's just that kind of ridiculous legislation.

in other words, according to this government it's much worse (like a year and 9 months in prison worse) to ask someone nicely to take down the huge annoying flag that is ruining your ability to enjoy your home then it is to try and lure kids into your home to sexually abuse them.

and that's just one example.

Then again there were people advocating a two year jail sentence for breaking a window today on cbc so i guess it shouldn't be surprising. 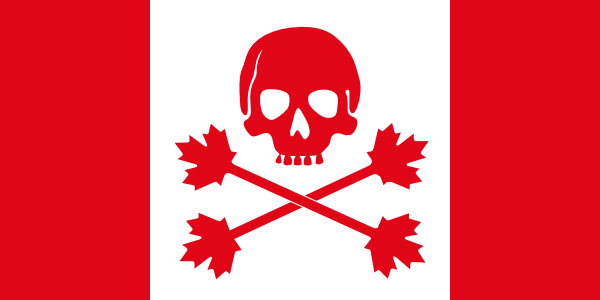 Now all that's needed is the image of a Conservative toady licking the boots of Uncle Sam and it would be complete. Or maybe instead of two red bars there could be one red bar ... and one blue bar. Red. White. And Blue. That's what Conservatives want anyway.

Both 60789 and Unionist could be prohibited by a condo board or other authority.

2. It is prohibited for any person to prevent the displaying of the National Flag of Canada, provided that
(a) the flag is displayed in a manner befitting this national symbol;
(b) the display is not for an improper purpose or use; and
(c) the flag is not subjected to desecration.2. Nul ne peut empêcher quiconque de déployer le drapeau national, pourvu que celui-ci :Interdiction

NS, I'm not going to let the dog pee on it, I'm just going to make a big tall screen out of it.

I like the idea of preventing condo boards and other such busybodies from stopping people from displaying a Canadian flag but locking them up for two years if they do sounds really excessive. I also don't see how anything that criminalizes desecration is remotely Charter-proof.

time for some public flag burnings....

I like the idea of preventing condo boards and other such busybodies from stopping people from displaying a Canadian flag ...

This is the thin edge of the wedge, as they say.  Suppose you have neighbours who do not want to have flags or other symbols ruining the appearance of the building that you share?

Evidently some ministers aren't such sticklers when it comes to demonstrations of patriotism:

And I'm sure no one needs reminding that it is no longer the government of Canada, but the Harper government.

What is it with some people and coats of arms? One of the first things Brad Wall's Sask Party did when they got in was remove (without any debate) the wheat sheaf as a symbol of Saskatchewan and replace it with the coat of arms.

Usually, when a law like this is passed, it is in response to some dispute(s) that triggered someone to believe such a law was necessary.

There are a few examples in the news piece.

Really, I think it is an attempt by the harperites to pretend Canadian patriotism is under threat, and to distract from other things they are doing - just like they did with the wording of O Canada that was being kicked around last year.

Time to start flying it upside down as a signal of national distress.   U.S. protesters have done that with the stars and stripes, so why not Canadians.

An upside-down Maple Leaf would convey the message very clearly.

Time to start flying it upside down as a signal of national distress.   U.S. protesters have done that with the stars and stripes, so why not Canadians.

An upside-down Maple Leaf would convey the message very clearly.

What colour underwear should I wear for the event?   Red and white, not blue, I presume. Or will they force me to wear a blue smock?

And I can think of a few places I'd like to see him and his gang strung up.

Heritage Minister James Moore said his condo board won't allow him to fly a flag. And the backbencher blowhard MP introducing this private members bill says many condo folks have complained to him about not being allowed to fly their flags outside their condos.

Save the flag flying for federal buildings. It looks ridiculous to see flags flying from people's homes like in Amerika. This is all a plot by the Cons to own the flag. Ridiculous, a non-issue.

I worry that the Cons want this country to follow Ameerika and be more jingoistic.

I like the idea of preventing condo boards and other such busybodies from stopping people from displaying a Canadian flag but locking them up for two years if they do sounds really excessive. I also don't see how anything that criminalizes desecration is remotely Charter-proof.

There is no penalty for desecration it is only that you lose the right to display the flag because it had been desecrated.  Thus Unionists flag has no protection.

And depending on how many nude people are cavorting in 6079's backyard and the nature of their games his might be subject to the improper purpose clause.  As well a condo board could tell you you didn't have the right to fly a flag upside down and tell you to take it to the Attorney General if you didn't like the condo boards ruling on proper uses of the flag or what constitutes desecration.

Currently all condo owners get a vote in by-laws such as ones prohibiting flags.  If such a by-law is in place it can be changed by the owners voting for that chance. However if there is such a by-law then it needs to be enforced no matter what the circumstances.  It is about democracy.

We will now have the absurd idea in play that a condo board gets to determine whether a flag is to fly or not based on their assessment of the exemptions to the law.  Stupid, stupid way to run a justice system.

There are a few examples in the news piece.

Really, I think it is an attempt by the harperites to pretend Canadian patriotism is under threat, and to distract from other things they are doing - just like they did with the wording of O Canada that was being kicked around last year.

It's all part of an ongoing reactionary campaign to restore outdated symbols of power and authority - especially the monarchy - to prominence. They want portraits of the Queen displayed prominently in all Canadian embassies and consulates; they put ROYAL back in the name of the Canadian Air Force and the Navy; John Baird took down works of art by modernist master Alfred Pellan that had hung in the Lester B. Pearson building for decades and replaced them with a photo of the Queen.

Ah, thanks for clarifying the intent of the bill, Northern Shoveler.  It's  a relief to know we won't get jailed for all the perceived offenses against the flag.

What's that? A deliberate strategy to associate revered symbols (meaningless patriotic crap) with Conservatives? No... impossible

These guys are just catching up with the GOP. rookies.

They're rebooting the neocon agenda that sputtered a little in the USA and was derailed ever so slightly by the Democrats.  But even though they seem to be behind the times in a way (e.g., raising the penalties for drug possession, emphasizing punishment over rehab and community justice, etc.), I would say they're trying to do it more effectively and more in tune with Canada's far less histrionic political and media culture.

Yeah, they're repuglican wannabes implanting the ultra-right program slowly but surely.  But without the fanfare, without the overt craziness of the extremes, and doing their best to maintain the fiction that they are common-sense centrists responding to the real will of the Canadian population while the liberals and the left control the public discourse.

In a way this is harking back to Nixon-Agnew's meme of the "silent majority" at the time of the anti-war, Black Power, Farmworker and Women's movements.  Unlike Nixon, however, this PM moves like a snake in the grass, cunningly and silently until it's time to strike. (Or like the shingles, which manifest themselves only once they've taken up strategic residence along the nerve trunks.  Hence the felicitous nickname Mr. Herpes.)