British Labour: Give Football Clubs Back to the Fans | rabble.ca

British Labour: Give Football Clubs Back to the Fans

British Labour: Give Football Clubs Back to the Fans

Like most of the commenters to the Guardian article, I find this information too good to be true. Is it possible that such a radical proposal could actually be implemented?

Quote:
The government is to unveil radical proposals that would give football fans first option to buy their clubs when they were put up for sale and require clubs to hand over a stake of up to 25% to supporters' groups.

The ideas, due to be included in the Labour manifesto with a promise of action in the first year of a new government, are designed to give fans a far greater say in how their football clubs are run and overhaul the way the game is governed.

It is believed that No 10, which has been working secretly on the plans for weeks, has resolved to deliver concrete proposals to tackle growing public disquiet at the level of debt carried by some clubs, the ownership model of others and the dysfunctional structure of the Football Association.

• Requiring clubs to hand a stake of up to 25% to fans in recognition of their links with their local community.

• Implementing a change-of-control clause that would allow fans a window to put together a takeover of their club if it was up for sale or went into administration.

• Giving the football authorities a deadline to reform the FA and remove "vested interests" from the board, and streamline decision making.

• Introducing a unified system of governance that co-ordinates issues such as club ownership and youth development.

The plans are likely to put Gordon Brown on a collision course with the Premier League, which has vigorously defended its free-market model in recent years, but he will claim that the proposals are for the good of the game.

What do babblers think (even non-footie fans)?

Oh yeah, West Ham F.C. was owned by Icelandic CB Holding before they filed for bankrupcy last year. Poor West Ham will probably be relegated this year and they have been playing with an ugly rectangle and the player's shirt number ironed over top of their defunct sponsor logo. 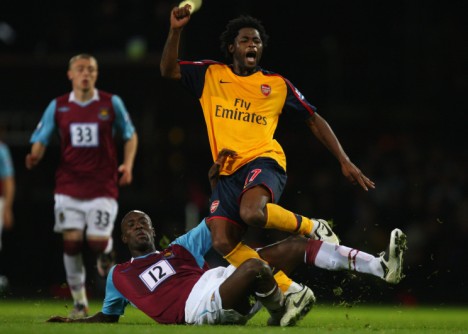 And last but not least, Chelsea F.C. kind of started the whole robber baron football ownership 2.0 when Russian oil oligarch Roman Abramovich basically bought the league title with a dream shopping list and the best coach money could buy (a.k.a. Jose Mourinho). He even bought his two favourite players (Ukranian Andrei Shevshenko and German Michael Ballack) so he could put them in his team--against the coach's wishes, since both players were past their prime and didn't fit his system). Like Man City's Robinho purchase, this is fantasy football for reals. 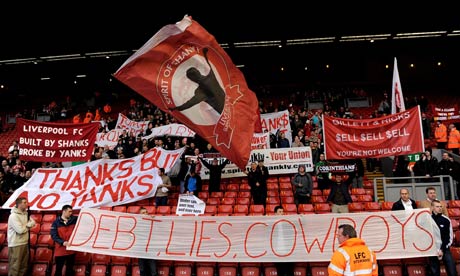 Quote:
Organisations such as Supporters Direct have long looked with envy at the German Bundesliga, where 51% of the club must be owned by supporters, and Barcelona, where democratic elections are held every four years.

There are two policies on the table, from several under consideration, that appear to have gained most favour with Brown and are now being subject to legal scrutiny by aides.

The first would, in effect, force clubs to hand a proportion of their shares – perhaps up to 25% – to fans. These supporters' trusts, comprising democratically elected representatives, would be recognised in law and maintain the clubs' links with their communities in a variety of ways. The mechanism for doing so would be left to the football authorities to work out.

The second proposal would give fans the opportunity to put together a takeover bid for their club in the event of it being put up for sale or going into administration.

In a pre-defined window, they would be able to seek financial backing for a new ownership model that might lead to a community-owned model, a shareholders' trust or a single owner who pledges to be democratically accountable to fans. The club's price could be set by an independent, external auditor.