What are you listening to (5)?

Here's a few recommendations all of them Canadian,:

Jim Bryson - Where the Bungaloes Roam

Sorry about the plugs. I just think these guys have the commercial formula down pat, and some of my favorite performers on their roster.

Presale for my partner's band began yesterday. Take a listen at: http://www.myspace.com/therestband.

I must admit, I'm biased on this one, but it's some great stuff! Give it a listen if you have a few minutes to spare!

I'm listening to the new U2 album; I love it.

I've ordered a couple of albums by Suzanne Vega - trying to get caught up on her career.

I've got some vintage Charles Mingus on the computer now. Quadromania puts out some good 4 CD collections.

It is released in support of AIDS fund raising, it is a compilation, features Feist on two tracks, and is amazing. And I found it at an independent. First new CD I've bought in years, but it is a good cause.

There was an excellent record store in Ann Arbor when I was there for the Pete Seeger show. I picked up some Seeger (both Peggy and Pete), as well as a Phil Ochs double vinyl and an array of things from the one-dollar bin, all of which have been in regular rotation on our turntable.

I've been really stuck on some Russian tuneskis lately. First off, I've been loving the band Ivan Kupala, particularly their song Vinograd. Really cool sound. And although not Russian by any stretch, the Ukrainain band, Murtviji Piven (I butchered the transliteration but I'm too tired right now to care) have a great song called "Everybody Fucks You". I heard the latter on last.fm.

However, I recently scrounged and bought a USB turntable so I can record my family's old vinyls to some newfangled digital format. You can imagine my excitement with this new toy. I've been settled in and listening to all sorts of albums. Just now I listened to Peter Allen's Tenterfield Saddler (awesome!) and right now I'm spinning up Jerry Jeff Walker's Mr. Bojangles. Earlier I dug up a copy of Helloween's Keeper of the 7 Keys Part 2. God that is some fun music!

I bought one of those turntables last summer, all fired up about transferring hundreds of 78s and 33s to digital format.  I took the machine out of the box, read the instructions, then put the machine back into the box.  The technology is probably really simple, but as soon as I see words like "soundcard" and "USB port" I hit fer the back forty, start a-chewin' on a straw and commence to whittlin' a hunk of poplar.

I'm listening to an assortment of CDs I pulled from my collection at random:

Doomztown G. Squad- One Way in

The Police on CTV's "Spectacle" hosted by Elvis Costello. God, this band is awesome!

Mine are away visiting so I have been playing through my Tragically Hip collection.  It is so loud I could hear it in the chicken coop while I was cleaning it out.  I might be old, but I have yet to reach 'old fart' stage

You must have gotten the wicked virus going around.  It went through here a few weeks ago.  Two days of everyone to sick to go to school and work.  Still gotta get those damn chores done which probably made me the biggest whiner and baby of the bunch.

Mine are all sick. I enjoy the Tragically Hip.

I think I will play some Sarah McLachlan tonight after the kids are in bed.

Just got home from wonderful little family dinner...down in the basement pulling out a load of laundry that I ran before I left the house.

CBC-2 has a number of new "internet-only" music streams. Unfortunately they use one of those "evil" embedded Flashplayers that ties up your browser..and there's no way around it...I've tried!    But the music is quite good!   Right now they're playing a Latin American Canadian tune!

I recently found an online source for some out-of-print CDs that I thought were unavailable, so over the past week or so have been listening to these: 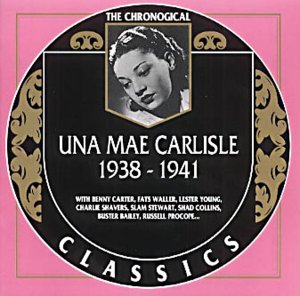 Una Mae Carlisle isn't very well known these days, but in my opinion she's a better singer than Billie Holiday.

Ethel Waters was one of Bix Beiderbecke's favourite singers.  The quality of these pre-electronic recordings isn't so hot, but the songs remain.

There's some nice hot jazz on this record, as well as a few cuts with Sophie Tucker singing. 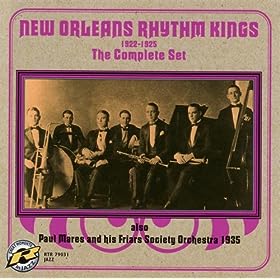 This record is still in print, but it was on sale so I scooped it up too.  The New Orleans Rhythm Kings were one of the most influential early jazz bands.  They could hold their own with any other outfit at the time, and to my ear sound as advanced as Armstrong's Hot Fives and Sevens, despite not having the most famous jazz musician in history in their lineup.

Tonight has been an evening with Etta James.  Her version of Tell Mama still sends shivers up my spine her voice is sooo strong.

"Another Pilot" from Plan Your Escape by Hey Rosetta!

Why in the world did this get repeated over and over?

CTV-TV has the most amazing Friday night concert series: Spectacle hosted by Elvis Costello. Last week he had The Police for an hour, tonight it's a guitar concert with Elvis, Kris Kristofferson, Roseanne Cash, John Mellancamp, and Norah Jones. Absolutely incredible - tune in if you can!

ETA: the finale is all five of them singing "Me and Bobby McGee". Tape it if you can - it is positively uplifting!

The Band - Jericho, or failing that any Chicago Blues...

Elvis has James Taylor as his guest next Friday - that should be a good one!

There oughtta be another line in "The Great Rock and Roll Swindle" just for Declan McManus.

This is what it's all about.

K'naan tingz listen to this u wont find better period

Boom Boom wrote:
CTV-TV has the most amazing Friday night concert series: Spectacle hosted by Elvis Costello. Last week he had The Police for an hour, tonight it's a guitar concert with Elvis, Kris Kristofferson, Roseanne Cash, John Mellancamp, and Norah Jones. Absolutely incredible - tune in if you can!

ETA: the finale is all five of them singing "Me and Bobby McGee". Tape it if you can - it is positively uplifting! I love this show, did not watch it last week with the Police though, as I am not a fan of theirs. But last night's show was just excellent.

Also watched a fantastic documentary on Bob Marley and the Wailers on Discovery. Though admittedly it was a trigger back to the devastated emotions of 1987 when Peter Tosh was murdered.

I've been spending the day with Houndog Taylor and the Houserockers.  I forgot how raw and real it was.  God could that man make a guitar yell and scream.  Now that I am in the house I am introducing it to my sceptical 14 year old.

Listening to "Cambodian Rocks", a collection of tunes from the late 60s/early 70s Cambodian rock scene, just before the Khmer coup. I don't understand a word of it, but it's awfully good!

Rexdale, thanks for the link to the K'naan stuff - not usually into rap/hip-hop but this guy might just get me interested!

My better half's band has NPR's song of the day today:

Listening to "Cambodian Rocks", a collection of tunes from the late 60s/early 70s Cambodian rock scene, just before the Khmer coup. I don't understand a word of it, but it's awfully good!

Rexdale, thanks for the link to the K'naan stuff - not usually into rap/hip-hop but this guy might just get me interested!

trus that he has chillin tingz, n some real ones his older stuff. Aint listened to him in a minute still just cuz of u know moods in the hood new wind blowin. If u get what I mean u get it otherwise jus think of it there a time for peaceful music. Wordplay lol

I am watching/listening to Steve Earle Live.

It is all his greatest hit being played at Rehearsal Hall.

Suzanne Vega again, Songs In Red and Gray, her masterpiece.

Suzanne Vega again, Songs In Red and Gray, her masterpiece.

I just finished listening to Bachman Cummings Jukebox. Quite good.

Irish schmaltzy pop music this morning - The Best of the Irish Rovers.  "A long time ago, when the earth was green..."

You riding the unicorn be ye, Boom Boom?

Aye. It's been a long time since I've bin trouble by an earworm, and The Unicorn fills the bill.

"Green alligators and long-necked geese,
Some humpty backed camels and some chimpanzees.
Some cats and rats and elephants, but sure as you're born.
Don't you forget My unicorns."

In the mornings, I usually alternate between the "Nightstream" or "Tempo" classical music programmes on CBC Radio 2, or the CBC Radio 2 Channel Player (classical channel).

If we want the CBC to survive, we have to patronise it. "Good Ceeb, very good Ceeb!"