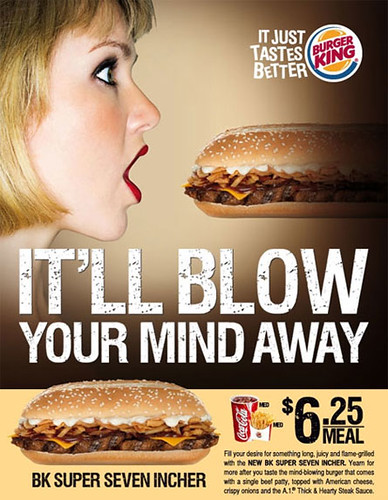 At least now we know the ingredient in their special sauce.

I think women should write to Burger King and ask disdainfully, "Seven inches?  Is that all?"

Two can play at the sexually demeaning game!  (Not that I think that would solve anything really, I guess, I'm just annoyed.)

Why do I get the feeling there's going to be a gender divide in the reactions to this advertisement...?

(I have to admit, though, I kind of smirked at it too, only out of sheer disbelief that they would consider this a smart idea.)

I only smirked at the ad myself. It was josh's comment that set me off.

I think women should write to Burger King and tell them there is going to be a boycott.

What an offensive piece of shit ad that is. Slightly less offensive is the men's reaction to it here.

I'm by no means prudish, but if they plan to place this ad for general distribution, I think it goes too far.  Not to mention demeaning to women and, arguably, men.

There's probably a reason why they chose to run this campaign in Singapore only.

Given that everyone seeing it can immediately see what it's about, I don't know that it would really qualify as "subliminal". It's pretty liminal.

It is?  Well, in any case, there's nothing subliminal about it

So, why Singapore? Is 7" incredibly meaningful there? Or are advertising standards particularly lax?

Did they deliberately run it there knowing that it would serve as viral marketing worldwide?

If so, it serves as a unique example of genius and gutlessness rolled up in one.

In Canada, yes. And given that subliminal advertising has been robustly debunked, to the point that the inventor of the term finally admitted to falsifying the original data that led to the collective belief that it really did make people do things, that's a bit of an embarrassment. We've gone to the trouble to ban something that's completely ridiculous. Next perhaps we'll ban the [url=http://www.museumofhoaxes.com/hoax/weblog/permalink/robot_combs/]Penis-m... Zionist robot combs[/url].

Nothing "subliminal" about it! What would the opposite be? Liminal?

It's right down there with that Bacardi ad as far as I'm concerned.  Also like Bacardi, I can't boycott what I've never used.

My first reaction isn't so much to take offense to this ad (I'm not easily offended) as to wonder just what on earth Burger King ad executives are on. Is it their burgers? Who is more compelled to buy a burger by this ad? Or by P. Diddy or that creepy stalker character that's always in their ads.

Seeing as how it is only being run in Singapore it also has racial constucts to it. Why did they not use an Asian woman, as opposed to a blond white woman? Too much potential flack?

I'd like to know why Burger King thinks it's a great selling point to imply that their burgers taste like penis (or, what comes out of a penis).

Must be straight men who came up with this one...

Singapore, where this "advertising" is appearing, has unusual and strict laws regarding such matters as spitting and blowing your nose in public. However, things are contradictory. It's not clear to me whether the advertising would have broken Singapore law even if it depicted a child rather than an adult. There is an "Outrage of Modesty" law which includes such penalties as imprisonment, caning, fines, etc., but its not clear that Burger King could be prosecuted under this law.

I think I will CONTINUE to stay away from Singapore and Burger King.

I guess that's the rebuttal ad right there.  A photo of a regular schlub, the target demographic, about to fellate the sandwich.  I wonder if the dudes they're aiming this at would think it all the way through with a little help like that.

Mind you, I don't really run screaming at the idea of eating something phallic.

Sorry josh...but only someone who has never tasted a penis would think they're as appetizing to put in your mouth as a burger. :D

Apropos of nothing...why are men bad at geometry? Because they think this:

You mean it isn't?

Oh no you don't.  You're not going to trick me that way.

Reminds me of that urban legend of the biology professor who taught the class that there is a lot of sugar in semen, and a student piped up, "Then why does it taste so salty?"

You misread. More likely to.

How do you figure?

I can not be looking good here, but I'm a very cynical human being. Obviously its hardly everything. The point is that eating that monstrosity of a burger can not help improve sexual appeal.

Well, I'm not a woman (or a gay man) but I would ahve to figure that guys who are in shape are more appealling to women that overweight guys. I mean, if the ad agency thought promoting 1000 calorie greasy burgers as likely to increase one's chance of getting a blow job, they seem to be missing the mark a little bit.

I can not be looking good here, but I'm a very cynical human being. Obviously its hardly everything. The point is that eating that monstrosity of a burger can not help improve sexual appeal.

Eat enough of them and you'll develop sufficient circulatory system issues and not be able to maintain an erection anyways.

I don't know.  There are an awful lot of overweight guys out there with girlfriends and boyfriends and wives and husbands.  Lots of larger women who have partners too.

I find it hard to believe that only the buff, beautiful people stand a good chance of getting laid.  Hasn't been my experience!

What the hell is with sandwich advertising resorting to lame sexual innuendos? It jsut seems so...overdone and obvious. I mean, I can enjoy a sexual allusion if it's actually done in a clever way but pictures of an open-mouthed woman coming face to face with a dick-shaped sandwich with the word "blow" in giant letters? You work in advertising! Try harder!

Actually, I don't find that one quite as offensive.  They were smart, for instance, to use a male voice for the oven.

This one doesn't leave much to be desired in terms of "subtlety". http://www.youtube.com/watch?v=yzwxmy1TWNM&eurl=http%3A%2F%2Fadage%2Ecom...

remind wrote:
BTW, subliminal sexual advertising is against the law in Canada.

This strikes me a implausible. Do you have a source for this claim?

It's just subliminal ads, not specifically sexual subliminal ads.  I believe the U.S. had banned them for a while as well, though now the FCC merely notes that subliminal ads would not be in the public interest, and that any broadcaster displaying them would be eligible to lose their licence over it.

Oh, and I don't really have a sole link for that, but if you start with Wikipedia and work outward you should find the same info.  I too wondered whether we'd really outlaw such a thing.

I fished around a bit about this topic.

I do not think that it is actually illegal to use subliminal advertising, but it is against the Ethics Code of the Canadian Broadcast Standards Council. Here's Clause 15:

Broadcasters must take all reasonable steps to avoid broadcasting any advertising material or program that makes use of any subliminal technique or device, which means any technique or device that is used to convey or attempt to convey a message to a person by means of images or sounds of very brief duration, or by any other means, without that person being aware that such a device is being used, or being aware of the substance of the message being conveyed or attempted to be conveyed.

Oddly enough, according to the commentary, "No decisions have yet been made pursuant to this provision." I have no idea why.

I might note that "subliminal" here has a pretty specific meaning, I think. Apparently, the idea of subliminal advertising goes back to alleged (but actually nonexistent) experiments in 1957, where "Drink Coca-Cola" and "Hungry? Eat popcorn" were flashed for 1/3000 of a second, during the showing of a movie, at five second intervals. (According to Wikpedia, it was all a hoax.) The Wikipedia article claims that "Subliminal advertising was also banned in Canada", but I couldn't find any reference to any specific law, other than the above ethics code. Something called "the straight dope" claims that subliminal ads were ... outlawed in Canada. But I remain sceptical, until I find, or someone directs me to, a reference to an actual law.

At least now we know the ingredient in their special sauce.

One is bound to find seamen in any sub.

That was funny and oh so true!

Okay, I found another equally messed up Burger King ad: Nothing says sexy like a plastic looking naked man with a strategically placed Flame....

This is my new favourite thread!

I don't know.  There are an awful lot of overweight guys out there with girlfriends and boyfriends and wives and husbands.  Lots of larger women who have partners too.

I find it hard to believe that only the buff, beautiful people stand a good chance of getting laid.  Hasn't been my experience!

Not my experience either - but then I am as buff as hell.

Sssshhh - no telling on me Michelle.

In fact I would say I did rather well for myself in that department.  Must be my twinkling eyes.

I like to say I have the body of a Greek God.  My trouble is its Bacchus

I've got a bit of a satyr thing going on myself - impossible to find sandles for my hooves.

Actually, I don't find that one quite as offensive.  They were smart, for instance, to use a male voice for the oven.

I wasn't offended. I was confused though.

I was a bit turned on. Then I remembered it was a toasting oven and that would probably hurt.