"Killing Ragheads for Jesus: American Sniper Caters to a Deep Sickness Rippling Through [US] Society" | rabble.ca

"Killing Ragheads for Jesus: American Sniper Caters to a Deep Sickness Rippling Through [US] Society"

"Killing Ragheads for Jesus: American Sniper Caters to a Deep Sickness Rippling Through [US] Society"

Many Americans, especially white Americans trapped in a stagnant economy and a
dysfunctional political system, yearn for the supposed moral renewal and rigid,
militarized control the movie venerates. These passions, if realized, will
extinguish what is left of our now-anemic open society.....

The book is even more disturbing than the film. In the film Kyle is a
reluctant warrior, one forced to do his duty. In the book he relishes killing
and war. He is consumed by hatred of all Iraqis. He is intoxicated by violence.
He is credited with 160 confirmed kills, but he notes that to be confirmed a
kill had to be witnessed, “so if I shot someone in the stomach and he managed to
crawl around where we couldn’t see him before he bled out he didn’t count.”

Kyle insisted that every person he shot deserved to die. His inability to be
self-reflective allowed him to deny the fact that during the U.S. occupation
many, many innocent Iraqis were killed, including some shot by snipers. Snipers
are used primarily to sow terror and fear among enemy combatants. And in his
denial of reality, something former slaveholders and former Nazis perfected to
an art after overseeing their own atrocities, Kyle was able to cling to childish
myth rather than examine the darkness of his own soul and his contribution to
the war crimes we carried out in Iraq. He justified his killing with a cloying
sentimentality about his family, his Christian faith, his fellow SEALs and his
nation. But sentimentality is not love. It is not empathy. It is, at its core,
about self-pity and self-adulation. That the film, like the book, swings between
cruelty and sentimentality is not accidental.....

Facts and historical truths, when they do not fit into the mythic vision of the
nation and the tribe, are discarded. Dissent becomes treason. All opponents are
godless and subhuman. “American Sniper” caters to a deep sickness rippling
through our society. It holds up the dangerous belief that we can recover our
equilibrium and our lost glory by embracing an American fascism.

Great article on what appears to be another Hollywood chest-beating hyper-macho rationalization of US militarism and aggression. Thanks for posting it.

American Sniper and the Murderers Hall of Infamy

"...The great success of American Sniper immediately follows the latest exercise, in the ongoing demonization of Islam and Muslims. Americans' penchant for violence and unending aggression requires the existence of targets who 'deserve' whatever they get, even and often especially when what they get is brutality, torture and murder.

Empire is greatly skilled and inventive at feeding the appetites of this ravenous monster. Given recent developments, the horrors will not be ending anytime soon..."  -- Arthur Silber

After just a handful of sometimes rowdy screenings, the film has been pulled from Baghdad’s only movie theater amid complaints from the Iraqi government — as well as viewers — that it “insults” Iraqis.

“It glorifies Americans and makes Iraqis out to be nothing but terrorists,” said Ahmed Kamal, 27, a teacher, who downloaded the film for free on a pirate Web site because he didn’t want to pay to see a movie in which the hero refers to Iraqis as “savages.”

“I wasn’t prepared to spend money to see it,” he said. “It portrays Americans as strong and noble, and Iraqis as ignorant and violent.”

The movie also omitted to note that some Iraqis worked with the Americans, said Sarmad Moazzem, 32, who was one of them. He served alongside U.S. troops for five years in an Interior Ministry logistics division and now works as a security adviser at the theater that pulled the film.

“The film makes out that all Iraqis are terrorists — men, women and children,” he said, “whereas, actually, there are some people who loved the Americans and wanted them to stay to help rebuild our country. The movie didn’t show any of them.”

He listed numerous inaccuracies, such as the identification of Sadr City, the Baghdad neighborhood where Shiite militias battled U.S. troops on numerous occasions, as a stronghold of al-Qaeda — which is a Sunni group.

Moreover, a scene in which Iraqis, including a child, attempted to take out the sniper didn’t ring true, according to his experiences.

The release of the film American Sniper has led to an increase in threats against Muslims in the US, according to an Arab-American civil rights group.

The organisation, which describes itself as the largest Arab civil rights organisation in the US, said it had collected "hundreds of violent messages
targeting Arab and Muslim Americans movie-goers", mainly from Facebook and Twitter.

The letter asked Eastwood and Cooper to speak out against such messages "in an effort to reduce the hateful rhetoric". 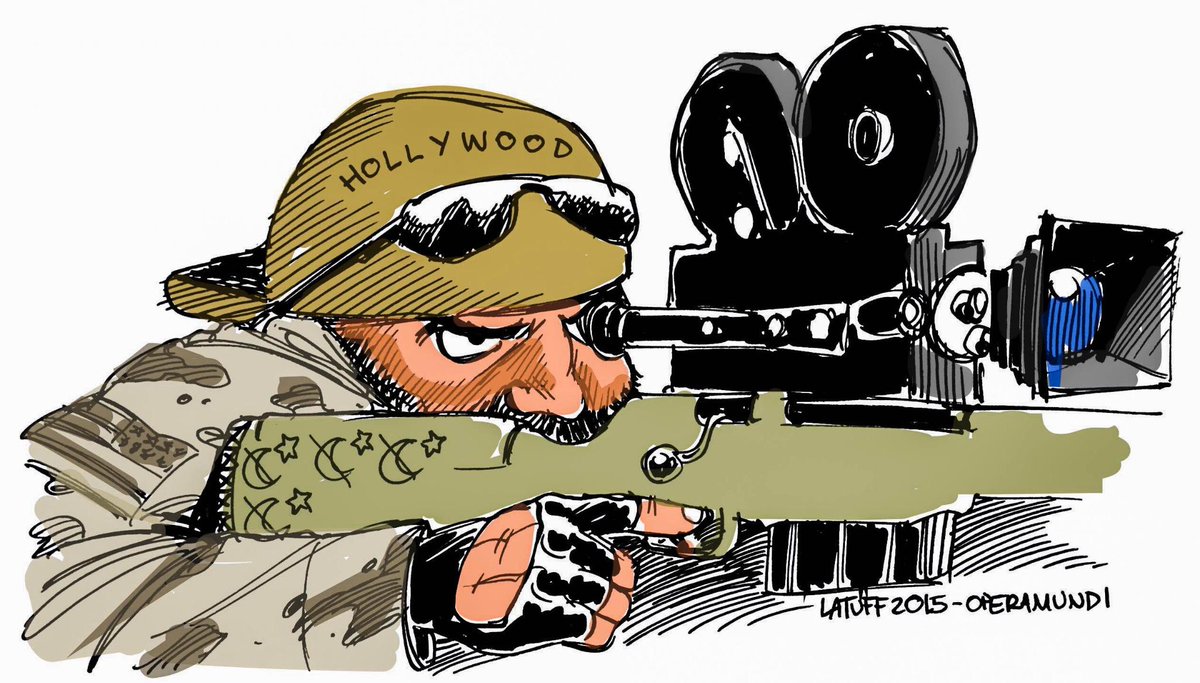 I don't really like Frankie Boyle but he's spot on this one!