Exhibit B (warning: photographs of dead people, including children)

Fortunately, most of them are dead by now.

ha, i remember seeing a whole gallerey once of these pictures with the mother under a blanket.  very strange indeed.

the pictures with dead people are just wierd.  although i can see the desire to record it back in the time when photos were something new.  the one with the baby on it's own is actually kind of beautiful ina way.  but the ones with the parents are creepy.

I thought this thread was going to be a denunciation of the denizens of Victoria.

I thought it was going to be a thread about underwear.

Speaking of victorian photography - smiles or no smiles, but did they ever have a strong sense of family back then.  Here's one of Europe's royal family featuring Queen Vic, the Czar, the Kaizer, and the rest of the blue brood.  And Queen Victoria god bless, she really did keep that family together until her last breath.  I'm sure they missed her terribly for many years after she passed.

I wonder how the future would judge some of the strange things we do, like Toddlers & Tiaras, or criminalization of marajuana use. But the covered mothers thing is a bit of a headscratcher for me though. Not so much creepy as just an odd solution to fidgety infants.

Well, yes. We might ask why they don't just include the mother in the photo! Of course, if we think about the Victorian literature at the time and the prevalence of absent mothers and orphans (e.g. in Dickens), we start to draw some scary conclusions.

The title shows an interesting discrepancy in tense based on academic discipline. As an historian, I would have used "were".

Indeed! As a literary critic, I know that the Victorians are still with us in their novels, photos, paintings, and, er, waxworks.

They still manage to come across as being creepy.  The images we see in the photographs aren't rendered less so through the passage of time.

Victorian burkas looks like to me. the good victorian christians were far ahead of erasing women publically.

i luv GCB btw anyone else?

CF why do you find Fawcett creepy? i don't get it.

Well, yes. We might ask why they don't just include the mother in the photo! Of course, if we think about the Victorian literature at the time and the prevalence of absent mothers and orphans (e.g. in Dickens), we start to draw some scary conclusions.

No, I do agree, it's the exclution is what was odd, or as you say creepy... And yeah, the composition of subjects in most photos I've seen from that period have always struck me as detached, ghostly... or morbid?

As a kid, like a lot of 12-year-olds in the early Seventies, I was a big fan of Mad Magazine.  At one point they did a piece called "The History Of Sex"...playing to the historical stereotype, they had a chapter entitled "Sex In The Victorian Era".

"There was NO sex in the Victorian Era.  Here is a portrait of Queen Victoria.  Now you know why".

I think the hiding part was because they could not keep themselves still and hold the kids still at the same time.  I couldn't imagine trying to keep a straight face and control a squirmy child. They destroyed the first pictures that showed the true face of the parents trying to hold a child for an hour.

Speaking of victorian photography - smiles or no smiles

Quote:
The thoughts, sorrows, dreams, doubts, political opinions, gossip and passions of Queen Victoria, poured on to 43,000 pages of her private journals, have been launched online by her great-great-granddaughter Queen Elizabeth.

"It seems fitting that the subject of the first major public release of material from the royal archives is Queen Victoria, who was the first monarch to celebrate a diamond jubilee," the Queen writes in a message to mark the launch, which follows an eight-month digitisation project to celebrate her own jubilee by the royal archives, the Bodleian library in Oxford and the information company ProQuest.

The journals track Victoria's meetings with prime ministers, the births of her children – "Dr Snow administered 'that blessed Chloroform'" she wrote after Leopold in 1853 – war and peace, the Great Exhibition in the Crystal Palace and, in passages which are often a rip-roaring read, her overwhelming love for her husband. "It was with some emotion that I beheld Albert – who is beautiful," she wrote on 10 October 1839, and after they married four months later: "He clasped me in his arms, and we kissed each other again and again!"

Her desolation after his death in 1861 aged 42, probably of typhoid – said to be caused by the Windsor Castle drains – seeps from the pages: "I have been unable to write my journal since my beloved one left us, and oh with what a heavy broken heart I enter a new year without him."

I did recently see a small selection of more joyful Victorian photographs.

Child mugshots of the 1800s

You find the weirdest things!  These are really interesting.  And creepy, indeed.

I'm telling you, find something about nineteenth-century Britain and odds are it's a gone be creepy. And probably cool.

A listverse curator who agrees with me!

Vignettes, or tableaux vivantes, come in at number 10 with a bullet. They also figure prominently in many period novels, notably Edith Wharton's (American, but still Victorian in its mournful heart of hearts) House of Mirth.

The title shows an interesting discrepancy in tense based on academic discipline. As an historian, I would have used "were".

Victorians, as they were, are creepy to me...

Indeed! As a literary critic, I know that the Victorians are still with us in their novels, photos, paintings, and, er, waxworks.

...as are their comical, derivatives. Quote:
“Among the refinements of middle-class Victorian shopping was the giving of change not directly from hand to hand but in paper packets. Chamber’s Edinburgh Journal in a review of London shops and shopping (15 October 1853), makes passing note of the custom. A customer seeking to buy a pair of kid gloves ‘is met at the door by a master of the ceremonies, who escorts him to the precise spot where what he seeks awaits him … He walks over rich carpets, in which his feet sink as though upon a meadow-sward; and he may contemplate his portrait at full length in half-a-dozen mirrors, while that pair of gentlemen’s kids at 2s 10 ½ d is being swaddled in tissue-paper, and that remnant of change in the vulgar metal of which coal-scuttles are made … is being decently interred in a sort of vellum sarcophagus ere it is presented to his acceptance’.”

Mind your crinkum-crankums and tallywags. It's time to get unrigged.

Those are funny.  I remember that in a Robertson Davies novel, "A Mixture of Frailties", one of his English characters uses the "buttered bun" reference when talking about a woman they hung around with - that anyone could "butter her bun".  It was used in a sexist way in that case, but it introduced me to a marvelously and rudely descriptive sexual metaphor!

I know! Some of these are so delightfully crass and obscene. Who said the Victorians eschewed sex, those dirty mettle fetchers.

(Btw, the site appears to be down, probably because of overwhelming hits. Here's a google cache.)

Temperance Images from the 1800s 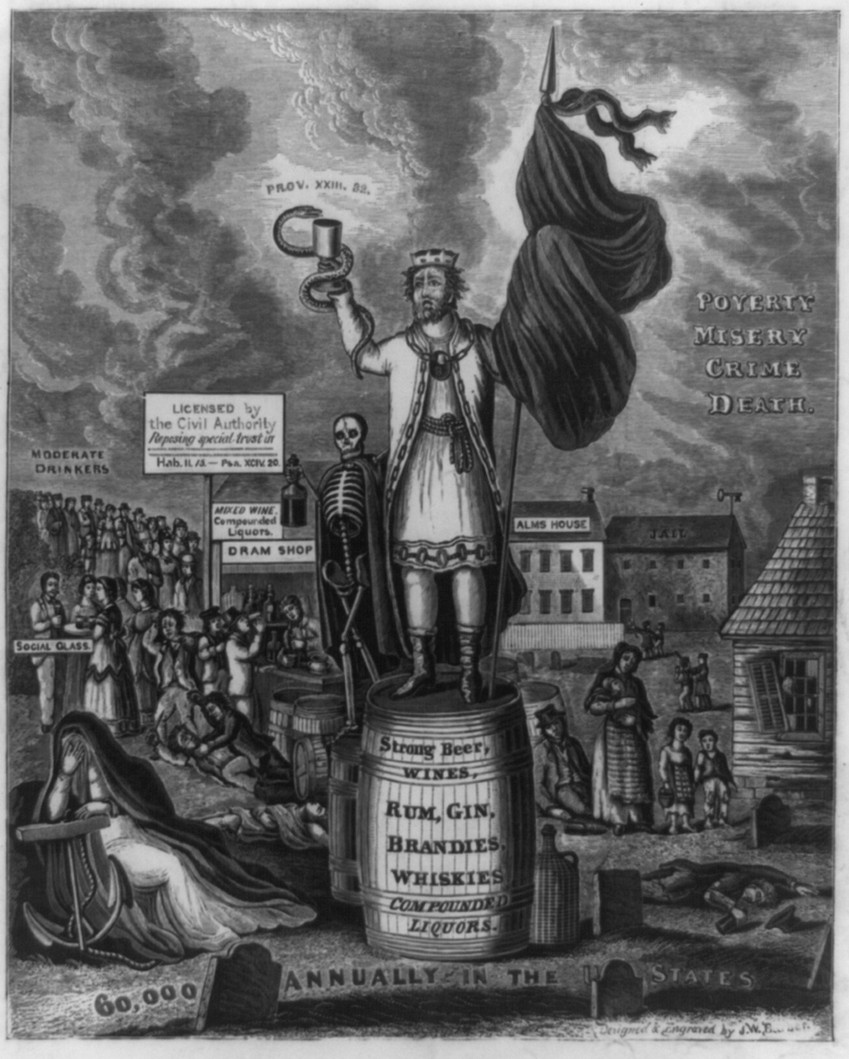 Not the most subtle propaghandists, were they?

Of particular interest - how closely allied the Klan was with the prohibition movement, and how they split the Democrats. The anti-Irish, anti-German and anti-Catholic nature of the movement, particularly when it came to banning beer as well as spirits, and the fact that the movement that ended it was largely composed of women, and headed by a republican.

Oh.... and Winston Churchill calling prohibition "an affront to the whole history of mankind" when he refused to do anything about smuggling from British colonies. 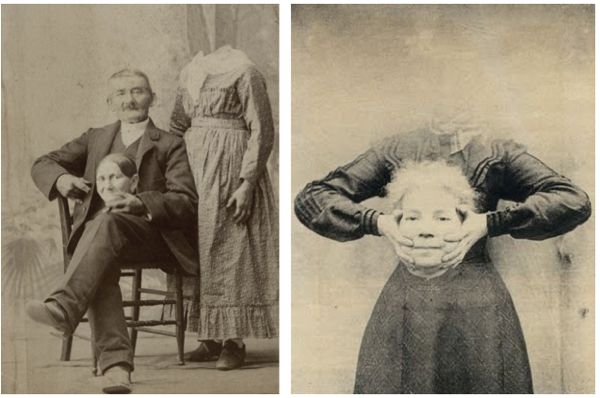 Victorian cautionary tales might just be the creepiest.  Stories about children dying horrific deaths because they didn't do what they were told were related by parents to children who were unruly. While scaring kids into behaving has probably been a parenting tactic since people first began to tell stories, earlier cautionary tales usually had an element of the supernatural to them - ogres, witches, [insert name of children-eating monster here]. Many fairy tales (not the sanitized Disney versions) were cautionary tales meant to subdue children - mostly female - and enforce conformity.

By comparison, the Victorians scared their kids straight with stories that mirrored their own lives, characters the children could relate to with realistic circumstances.  For some reason I find that creepier than the monster-in-the-woods kind of tale.

It's like the difference between watching a really lame horror movie with bad special effects and an implausible plot, and watching a horror movie that so closely mirrors reality that you don't have make an effort to suspend your disbelief.  The latter has a much bigger impact.

Hoffmann's theory on childrearing included never letting them know what to expect. A broken plate might get them nothing, but an unbuttoned collar could mean a thrashing.

I'd post a link, but at least one of the stories is racist, so I'll pass. THe others involve children being burned to death, carried away by kites,having their hands cut off with scissors, and withering away from starvation. For those who are interested, Mark Twain's English translation is fun.

Oh my god.  Seriously, Smith, I can't believe it.  I was reading Rebecca's post about cautionary tales and I swear I hadn't scrolled down to your post yet, and the very first thing that came to my mind is Der Struwwelpeter!  My mother still has her book from when she was a child in school in Germany.  It's incredible!  We take it out occasionally and read it for a laugh.

My understanding of the racist story is that it was trying to teach children (albeit in a crude and racist way) NOT to mock black children.  But of course, the language used to describe the black boy in the story is racist in itself!  And the solution (to make the boys making fun blacker than the black boy) is, well...obviously not good.  Still, for 1845 Germany, it's a hell of a lot better than, say, 1930's and 1940's Germany!

And the story where the little boy who sucks his thumbs ends up getting his thumbs cut off by a complete stranger tailor who happens by - wow!  Now that's one creepy book!

Yes, I agree with you, but I figured it's best not to tempt fate. And Anyone who is interested can look it up at Project Gutenberg, as well as many other places.

Good Lord, I haven't seen those headless photos! How did they do it? This one is my favourite:

The clean shinbone-cum-neckbone is a hilarious touch.

A propos nothing, I'd also recommend Eminent VIctorians, in which Lytton Strachey takes the piss out of a number of Victorian idols, including Florence Nightingale and General Gordon.

Nope, though sometimes it is quite effective

This pic from that same Temperance page is well-worth printing: 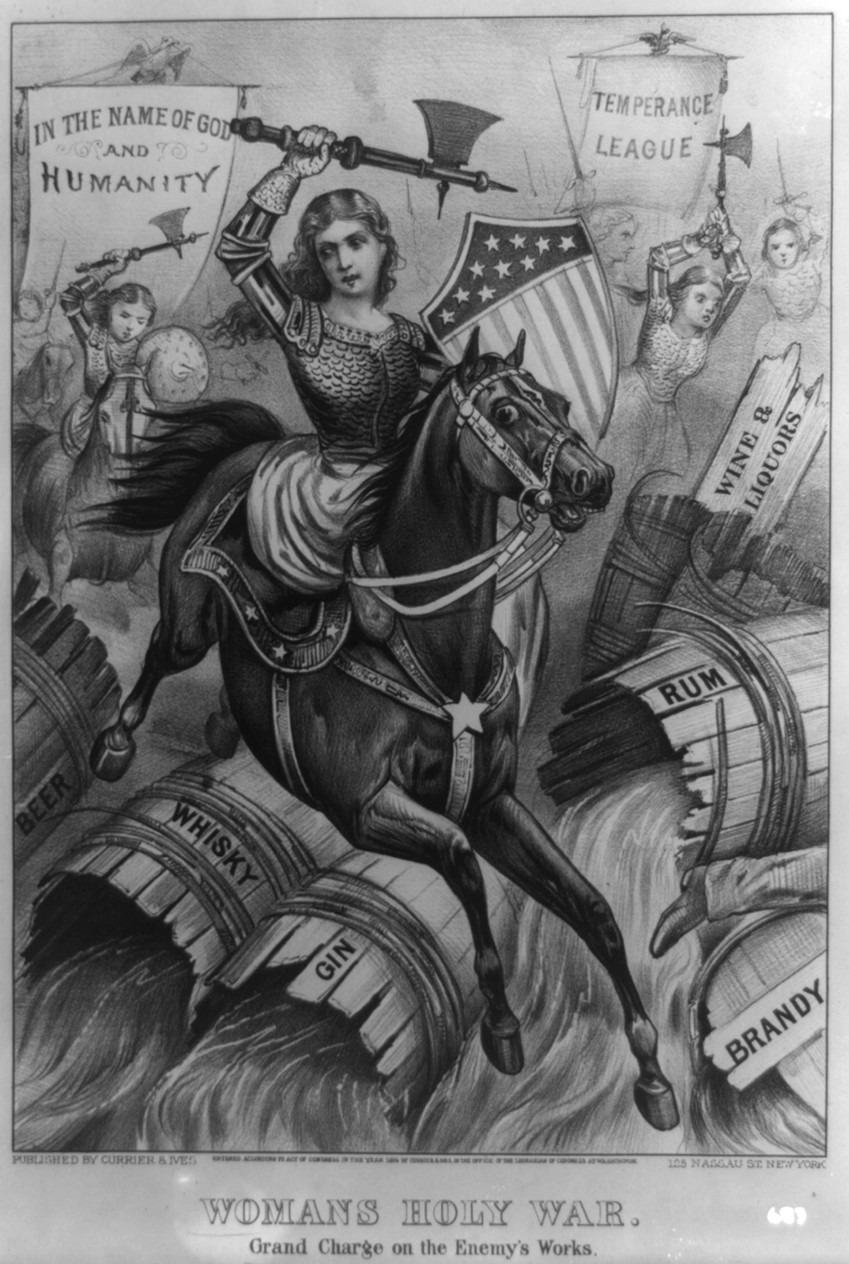