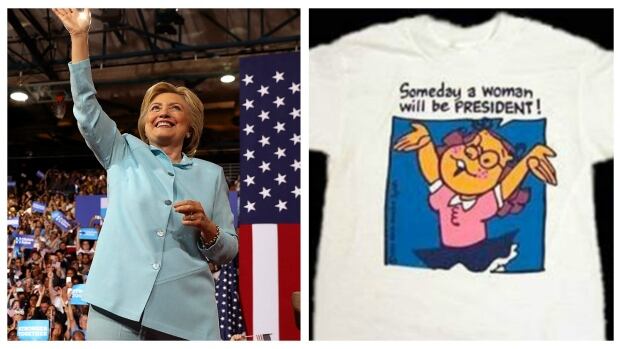 It's now official: the U.S. could, conceivably, elect a woman as president this November for the first time in its history.

And that's an idea that, back in 1995, one Walmart location in Florida found "offensive." Thanks to Twitter user Nick Kapur for reminding us of this strange story:

In 1995 Walmart pulled "Someday a woman will be president" T-shirt from shelves, saying it offended "family values."

"It was determined the T-shirt was offensive to some people and so the decision was made to pull it from the sales floor," said Jane Bockholt, a spokeswoman for the company at the time.

You'd figure with all their millions,they'd be too busy enjoying life than to worrying about the color,creed,gender,sexuality or religion of the President.

These people can literally wipe their asses with $100 000 bills all day long. Why so invested in politics beyond wanting to cling to your wealth?

I never shop at Walmart. Never. And because of this story (that I missed in 1995) I will make it a point not to step foot in one.

Even funnier is that it probably wasn't even slightly contoversial when it appeared in thousands of local newspapers that run Dennis the Menace.

In the original strip there were two more panels.  In the next panel, Dennis shoots Margaret with his slingshot, and in the last panel he says "Make the neighbourhood great again".

Nice to hear some anti-war protesters at the DNC.

Clinton is speaking tomorrow nite. It will be the least she has ever been paid for a speech

So is Hillary the nominee because she is married to Bill?

Delegates Are Using the Convention to Make the TPP Politically Unacceptable (thenation.com)