Justice Scalia’s Death And Implications For The 2016 Election, The Supreme Court And The Nation

The future composition of the Supreme Court is the most important civil rights cause of our time. It is more important than racial justice, marriage equality, voting rights, money in politics, abortion rights, gun rights, or managing climate change. It matters more because the ability to move forward in these other civil rights struggles depends first and foremost upon control of the Court. And control for the next generation is about to be up for grabs, likely in the next presidential election, a point many on the right but few on the left seem to have recognized.

Especially if Senate Republicans block a liberal appointee to the Supreme Court, this has the potential to inject this issue into the Presidential campaign. And it will work both ways. You can bet that Ted Cruz will be running on a platform to replace Scalia with more and more Scalias. This could finally be the election that brings the Supreme Court into national focus much more (it has not been mentioned so far in any of the presidential debates I’ve seen). You can listen to UCI Law Dean Erwin Chemerinsky discuss the implications of the changing Supreme Court with Dahlia Lithwick on Slate’s Amicus podcast.

The Implications for the Nation of a changing Supreme Court. There is so much at stake concerning the Supreme Court for the next few years. As I wrote in Plutocrats United, the easiest way to amend the Constitution to deal with campaign finance disasters like the Supreme Court’s opinion in Citizens United is not to formally amend the Constitution, but instead to change the composition of the Supreme Court. Regardless of what happens with Justice Scalia’s replacement, there will be likely at least three other Justices to be appointed over the next 4-8 years of the next President’s term. The stakes on all the issues people care about—from abortion to guns, from campaign finance and voting rights to affirmative action and the environment, depend upon 9 unelected Justices who serve for life.

Ed Whelan (a strong conservative, and former Scalia clerk) and I will be doing a webcast on The Supreme Court and the 2016 Elections on Feb. 22. I’m sure these issues will be hotly debated, as moderated by my colleague (and former LA Times legal correspondent Henry Weinstein).

The kind of battles we will see over the fate of our Nation, enacted in the polarized Congress and in a polarized nation, will be epic. The stakes are high, and as I explain in Plutocrats United, depending on conditions we could see a vacant Supreme Court for a while (look for conservatives to argue over that) and likely the end of the filibuster for Supreme Court nominees (look for that if there is unified control of the Presidency and Senate, but without a filibuster proof majority.)

"Journalist Diana Johnstone, author of the new book Queen of Chaos: The Misadventures of Hillary Clinton. Clinton has made herself into the embodiment of the military industrial complex and the Empire, including her unabashed warmongering, shameless love affairs with Saudi Arabia and Israel and continued belligerence toward Russia..."  (starts @ 3:35)

Will this person be the next SC Justice?

More and more it looks like Sanders really does walk the talk.

Ranking The Presidential Candidates By Wealth

Democratic presidential hopeful Bernie Sanders has cut into rival Hillary Clinton's lead ahead of the South Carolina primary, according to a new poll.

The CBS News “Battleground Tracker” poll released Sunday shows Sanders trailing Clinton by 19 points. It comes on the heels of other polls that have him trailing the former secretary of State by up to 38 points in the Palmetto State.

Sanders trailed Clinton in the CBS News poll one month ago by 22 points.

The poll reveals that Sanders struggles with recognition in South Carolina, where only 44 percent of respondents agreed that they know him “very well,” compared to 70 percent who said the same of Clinton.

South Carolina voters also question the preparedness of the Vermont senator to be president, with only 51 percent of respondents saying he is “ready” to be commander in chief, compared to 80 percent who said Clinton is prepared for the job.

Despite his shortcomings in those categories, Sanders is still seen as the more trustworthy candidate, with 75 percent of respondents agreeing he is “honest and trustworthy,” compared to 60 percent of Democrats who said Clinton can be trusted.

Great interview with Harry Belefonte by Fareed on CNN this morning. Belefonte talked about one of the results of Obama being elected President is that it awakened some reactionary forces.

Sanders needs to up his game if he hopes to narrow the gap in the SC primary which will be held on Saturday, February 27. Harry Belefonte should be able to help him there.

Nevada is next Saturday, February 20

Talk about throwing a grenade into the GOP!  Maybe Trump single-handedly is bringing the GOP into 21st century politics.

‘If it doesn't backfire, then it will be official; nothing can stop him,’ GOP strategist says.

The Vermont senator warned the public would not look kindly on “Republican actions to try to thwart” President Obama’s Supreme Court nomination.

“When there is a vacancy, the president makes a nomination and the Senate deliberates and then votes up or down,” Sanders said. "I hope that happens."

Sanders said he had one litmus test for anyone he would potentially nominate to serve on the Supreme Court -- that the new justice would overturn the Citizens United decision, in which the Supreme Court ruled corporations or unions could spend unlimited amounts of money to support or denounce candidates in elections.

"I would never nominate anybody to the Supreme Court who is not prepared to overturn that disastrous decision," he said.

The Democratic presidential candidate acknowledged his political views were very different than Scalia’s, but he applauded him for his years of public service.

One of the lamer hit jobs on Sanders by the establishment so far.

Just looking at one pollster for SC which shows that since November Sanders has narrowed the gap by 28%, shrinking Clinton's lead from 47% to 19%

What to Watch During the Most Decisive Phase of the Election

Trump could clinch nomination in home state of New York

if he din't blow it last nite.

Bernie Sanders Won The Most Votes In New Hampshire Primary History: A Look At The Numbers

Quote:
Bernie Sanders won the most votes of any candidate in the history of New Hampshire presidential primaries. New Hampshire is a tiny state, and the numbers may mean little outside of New England, but it is actually an important state for presidential candidates.

It was the second highest voter turnout in the history of New Hampshire primaries. Bernie Sanders’ win, in particular, is historic in itself. His total win of 151,584 votes means he received more votes than any other presidential candidate in history, not just in this year’s primary. This translates into a total of 28 percent of the votes, a higher percentage than any other candidate in the race.

No wonder these GOP debates are a baptism by fire for him.

Supreme Court history: in presidential election years, vacancies have been routinely filled since 1900 or longer http://www.scotusblog.com/2016/02/supreme-court-vacancies-in-presidential-election-years/ …

The question should perhaps be who is going to do more to change things and help Americans with their jobs, education and health care, retirement, etc.

IS BERNIE SANDERS A BETTER FEMINIST THAN HILLARY CLINTON?

Clinton Campaign Knew About its Women Problem Before Sanders' Surge

Obama's strategy will be to appoint another SC Justice or he will make it an election issue.

So this election could be huge as it could be about all 3 levels of government:

So this election will be huge as it could be about all 3 levels of government:

Obama had better be careful with this "hot potato" because if Democrats think this is going to be the kind of result of his appointment a lot more of them might rush to support Sanders.

Blocking Scalia's replacement is a risky strategy for the GOP

There are serious compromise candidates on the current shortlist, extraordinarily qualified moderates like Sri Srinivasan who would likely refuse to overturn treasured conservative precedents like Heller (establishing an individual right to bear arms) and Citizens United(allowing unlimited corporate electioneering).

Warren's comments are being widely circulated

The Whale That Nearly Drowned The Donald

How Trump schemed to win back millions from a high-rolling—and doomed—Japanese gambler.

Donald Trump has made his political bones so far by being a bully and a liar. Ted Cruz is a bully and a liar. Jeb Bush is petty and a liar, but he lies with establishment gentility, so we should say that he prevaricates. Marco Rubio is whatever punchcard of antagonistic hogwash was fed into his slot from his days as a Florida political protege. Ben Carson, well … Let’s not wake him. He looks so peaceful.

This fiasco of a debate won’t change a thing about how these candidates act, and deciding not to cast a vote for this behavior would mean resigning from the current Republican party, unless you want to vote for Kasich or feel like sending Ben Carson to live in a city paved with constitutions. 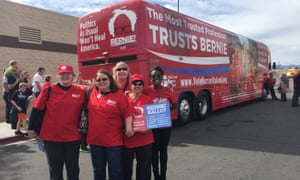 To be expected but more shameful Clinton/establshment sleeze

Outraged by the delegate deficit Sanders faces even after his New Hampshire win, the senator's backers are taking action

Bill Hyers, a top strategist for former Maryland Gov. Martin O'Malley's presidential campaign, said in an email he doubted the petitions would make a difference.

"I will tell you if Bernie does have the majority of the delegates by election going into the convention and the superdelegates tried to reverse that, it would be absolutely awful for the Democratic party and all holy hell would break loose," Hyers said. "I don’t really see that happening, but that is why I largely think superdelegate counts are absolutely pointless right now. The candidates just need to go out and win some states."

The Clintons’ sordid race game: No one will say it, but the Clintons’ rise was premised on repudiating black voters

Here's what Bill and Hillary mean to me: Sister Souljah, welfare reform, Ricky Ray Rector and the crime bill

Carolyn Leckie: Why Bernie Sanders, not Hillary Clinton, would get this feminist's vote

Is it time for grassroots movements to coalesce around the Bernie Sanders revolution?