The University of La Plata said it was honouring him for his efforts to break "media monopolies" in Latin America and support "popular communication". [...]

The university said it was giving Mr Chavez the Rodolfo Walsh award for "his commitment to defending the liberty of the people, consolidating Latin American unity, and defending human rights, truth and democratic values".

Mr Chavez and Ms Fernandez signed a series of major commercial accords under which Venezuela will import cars, food and agricultural machinery from Argentina in return for continued oil supplies.

Washington won't appreciate this at all. And we can be sure the Harpers won't know what to think or say about it.

Sounds as if the right-wing press in Argentina isn't too happy either these days:

The award to the Venezuelan leader coincides with a row over press freedom in Argentina.

Two of Argentina's biggest newspapers, Clarin and La Nacion, have accused President Fernandez of supporting trade union activists who blocked the distribution of the newspaper on Sunday.

Clarin published a blank front page on Monday in protest.

Ms Fernandez's government has denied any involvement in the dispute, calling it a matter of industrial relations.

But she has been involved in a series of disputes with Clarin and other private media groups, and is promoting a new communications law which would reduce their dominance. 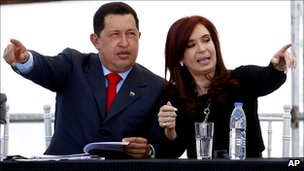 We are living in exciting times.

Argentine President Cristina Fernandez, one of Chavez's closest allies in South America, and her late husband and predecessor as president, Nestor Kirchner, met as law students at La Plata University in the 1970s.

The university was a hot-bed of leftist activism during Argentina's 1976-1983 military dictatorship and the prize awarded to Chavez is named after Rodolfo Walsh, a journalist and author who was killed by security agents in 1977.

A great honour. And not much appreciated by the bootlicking scribblers who snort about "freedom":

John Dines, a professor at Columbia University's School of Journalism in New York, said the controversy over the prize revealed differing ideas about press freedom in Latin America.

I hate not being able to keep up.  Unionist, can you give layman's language?

It sounds good but wasn't in very readable language.

We need simple, short, soundbytes.  I can't read everything.

This is a joke, right?

I think he took a wrong turn at Albuquerque ... is all.

N.R. K, you made me lol. Anyway, the newest right-wing conscript has been found wanting.