If this is what the insurance industry is doing about Sicko, imagine what Wall Street is planning to do about "Capitalism" 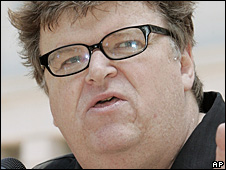 Moore won an Oscar for his 2002 film Bowling for Columbine

Award-winning film-maker Michael Moore has announced the title of his forthcoming documentary, which looks at the global economic meltdown.

In a statement, the Fahrenheit 9/11 director said Capitalism: A Love Story would be "be the perfect date movie".

Moore, who has made three of the top six highest-earning documentaries, will release the film in the US in October.

The exact date - 2 October - is a year and a day after the US Senate voted to approve a $700 billion bailout of Wall Street.

"It's a forbidden love, one that dare not speak its name. Heck, let's just say it: It's capitalism," Moore said.

In February, Moore appealed for people working on Wall Street or in the financial industry to come forward and share what they knew.

At the time he said: "Be a hero and help me expose the biggest swindle in American history."

We've just been informed that Bill Moyers, on his show tonight, will expose for the first time the health insurance industry's secret campaign against Michael Moore and his film, "Sicko." It contains a stunning revelation and admission by a top health insurance executive -- the former head of publicity for CIGNA, one of the top health insurance companies in the country -- that the disinformation and attacks on Michael and the film were extensive and well-planned. Their job was to stop the movie from reaching a wide audience (and, more importantly, from having the widespread political impact the industry feared "Sicko" would have).

Wendell Potter, former Head of Corporate Communications at CIGNA (which provides health insurance to nearly 70 percent of the Fortune 100 companies) admits that, in fact, "Sicko" "hit the nail on the head" and told the real truth about how much better people in other countries have it when it comes to their health care.