A senior Israeli official told Yedioth Ahronoth newspaper: "As far as the international arena is concerned, Israel is entering what is probably its darkest era.”

In a further sign of concern, an unnamed government minister was quoted last week as saying: "When the scale of the damage in Gaza becomes clear, I will no longer take a vacation in Amsterdam, only at the international court in The Hague" -- a reference to the International Criminal Court in the Netherlands that tries war crimes.

Over the past week about 300 human-rights organizations have jointly prepared a 37-page dossier of evidence to be presented to the court.

I don't think they will be avoiding it.

I expect the ICTJ will be involved. I believe it's a mediation body, Truth Commissions and such ...

Maybe someone can post the link to the audio file later.

Carter very clear and cutting through all the main North American crap.

I was surprised at what a douchebag Lyndon McIntyre was during that interview.  Maybe he was playing media-lobotomized North American straightman to Carter's reasonable portrayer of events in Palestine, but it was nice to hear Carter refute, for example, McIntyre's suggestion that Hamas was nothing but crazed violent religious zealots.

Meanwhile, back in Palestine...

Israeli soccer matches were suspended during the assault on Gaza. When the games resumed last week, the fans had come up with a new chant: “Why have the schools in Gaza been shut down?” sang the crowd. “Because all the children were gunned down!” came the answer.

A light unto nations?

A blight on humanity

Quote:
Turkey's prime minister stalked off the stage at the World Economic Forum red-faced Thursday after reproaching Israel's president over the Gaza offensive by saying ``You kill people."

And the Turkish people appreciated his stand: 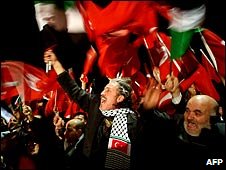 Israeli soldiers will get legal backing in any war crimes cases

James Hider in Jerusalem, The Times

Israeli military personnel will get full legal backing if war crimes charges are brought against them after the campaign in Gaza, the Israeli Prime Minister has said.

An estimated 1,300 Palestinians died during the three-week battle. Doctors in Gaza claim that 700 of them were civilians and that many were children.

Israel is facing increasing calls at home and abroad to hold independent investigations into allegations that its troops fired into civilian areas and at people carrying white flags, refused to treat wounded Palestinians or allow their evacuation, and killed medics trying to treat the injured.

The army has opened its own inquiry into whether white phosphorus shells were used illegally against built-up civilian areas.

"The commanders and soldiers sent to Gaza should know they are safe from various tribunals and Israel will assist them on this front and defend them, just as they protected us with their bodies during the Gaza operation," Ehud Olmert said during a cabinet meeting yesterday.

The army is not divulging the names of unit commanders involved in the Gaza fighting, to avoid possible criminal charges, and has advised them not to travel to Europe. (...)