DYER:"A Japanese historian once told me in confidence that he reckoned around 400 people, make almost all the decisions in Japan.

Were any of those 400 people in the ÇIA? Tim Weiner’s Legacy of Ashes: The History of the CIA notes how the CIA ensured that Nobusuke Kishi became Japan’s prime minister:http://www.japansubculture.com/how-the-cia-helped-put-the-yakuza-and-the...

DYER: "55 years ago, prime minister Kishi, resigned after winning the battle to push the treaty revising the country’s military alliance with the US through parliament. The demonstrations against it were so massive and violent that his political capital was exhausted."

"Matsutaro Shoriki, president of Japan's largest newspaper, worked closely with the CIA to bring nuclear power to Japan as part of Eisenhower's effort to sell the benefits of the peaceful atom in order to justify use of nuclear weapons."

"Abe is a notorious denier of history, having questioned the veracity of Japanese atrocities toward China and threatened to rescind Japan's apology to women forced into prostitution to service Japanese troops."

The protests drew up to 60,000 participants in Tokyo alone, where Japanese people of all ages rallied in Rinkai Disaster Prevention Park calling for the scandal-plagued Abe administration to step down and for the preservation of the Constitution’s Article 9. Rallies were also held in Osaka, Fukuoka, Hokkaido, and other cities across the country.

Article 9 of the Constitution explicitly renounces “war as a sovereign right of the nation and the threat or use of force as means of settling international disputes.”

According to an Asahi Shimbun survey, only 39 percent of Japanese voters support Abe’s proposal to revise the Constitution, while 53 percent oppose the move. However, a separate survey by Kyodo News agency found that while sixty-two percent of respondents oppose the revision by Abe’s 2020 target date, 58 percent feel that a constitutional revision is “necessary” or “somewhat necessary” due to the “outdatedness” of certain clauses.

The ultra-nationalist pressure to rearm

Much smaller pro-amendment rallies were also held in the capital calling on the government to explicitly define the status of the SDF while broadening its mandate to take part in military actions abroad.

In a video message to the Kokai Kenpo Forum, Abe celebrated his Constitutional reform advocacy as other speakers noted its necessity for defining the “honorable status of the SDF in the Constitution and [raising] the morale of SDF members.”

The forum is associated with Nippon Kaigi (Japan Conference), an ultra-nationalist lobby group that has a parliamentary league for which Abe serves as special advisor. The group, which includes prominent businessmen, academics, and bureaucrats, has a record of extolling the virtues of Imperial-era Japan and seeks to do away with the entire “occupiers’ Constitution” of 1947.

A U.S. congressional report in 2014 noted that Nippon Kaigi believes that “Japan should be applauded for liberating much of East Asia from Western colonial powers, that the 1946-1948 Tokyo War Crimes tribunals were illegitimate, and that the killings by Imperial Japanese troops during the 1937 ‘Nanjing massacre’ were exaggerated or fabricated.”

Support for constitutional revision has also been fanned by U.S. President Donald Trump, who has placed pressure on the Abe government to purchase more U.S. weapons. Trump’s pressure coincides with a push by LDP lawmakers to increase an already record-high defense budget that amounts to 5.19 trillion yen, or $45.77 billion. Washington also hopes to enhance the U.S. military presence in the Asia-Pacific region, a strategy that would be assisted by a remilitarized Japan.

I take insult to talk about the Japanese downplaying the NanJing massacre!!

this is exactly the same thing as saying Hitler never killed any Jews!!! Or something similar?

I don’t know who this fucking character is that is making these comments from Japan, and if true, he’s a fucking bullshiter !!!

Also, this person from Japan spreading this war pig hatred does not reflect the majority of the Japanese people’s!!!

..the first part of that post was about the opposition to militarization. the second part is the stats and the third the pro military connected to the president who are downplaying the massacre. so what is dangerous about that? am i missing something?

Yes I’m referring to the third part, the downplaying of Japanese war crimes.

I know this stuff is out there and I do not believe it in any way reflects your own opinions/views, you’re just making an informed contribution into this thread.

But I have to point out that many people from Asia/Pacific nations are immensely insulted at how Japan glorifies past war pigs whom are guilty of horrific war crimes.

But please continue posting anything you feel relevant to this thread as you already have. These things have to be discussed!

..i believe the majority of the japanese population is insulted by it.

70,000 people protest US army base in Okinawa

Around 70,000 people protested the Japanese government’s plan to relocate a US air base within Okinawa island. Locals say the base will hurt the environment and claim they have sacrificed enough for Japan’s security alliance.

The demonstrators gathered at a park in the prefectural capital of Naha on Saturday, in an attempt to urge the central government to abandon their plan to transfer the US Marine Corps Air Station Futenma from the crowded town of Ginowan to the less populated coastal region of Nago.

Okinawans want to block the government’s plan to start dumping soil into Henoko Bay within days to make a landfill for the new site. Environmental groups say construction at the bay risks corals and dugongs, the endangered marine mammals.

The prefecture is already home to the majority of US military facilities and about half of the 50,000 American troops in Japan. But the Japanese government think the base is necessary for Japan to maintain the perceived deterrent a US base provides, while citizens on Okinawa see it as an unfair burden....

The 2012 movie Emperor is quite an eye opener about the end of the war and what to do in Japan Gens McCarther and Fellers, and Emperor Hirohito come across as ok, but President Truman not so much

In Japan, voters in Okinawa have elected a new governor who has promised to oppose the long-running U.S. military presence on the Japanese island. Denny Tamaki has vowed to block the controversial relocation of a U.S. military base—a move which is likely to upset both the central government and the United States, which has long depended on Okinawa to accommodate its military bases and personnel. Many residents of the small island have opposed the U.S. military’s presence for decades. This is Governor-elect Tamaki.

Governor-elect Denny Tamaki: “Over two generations, governors have protested the new bases at Henoko and have been ignored. But now, the gubernatorial government has already withdrawn its permission for the base’s land reclamation project. And the prefectural government has used the proper process based on what is best for the good of the public. I will continue to let the central government understand that not abiding by this process is undemocratic and is against the rule of law.”

Japan: Okinawans Reject Relocation of U.S. Base in Referendum

In Japan, residents of Okinawa opposed plans to relocate a U.S. air base elsewhere on the island in a referendum Sunday. Over 70 percent of voters voted against the plan. This is a local resident explaining her vote.

Okinawan resident: “Accidents have taken place here. However, the U.S. forces, even if they break laws or regulations, go unpunished in accordance with the relevant agreements between Japan and the U.S. So I don’t think it’s fair. Plus, the military base is something related with war. I don’t think military bases should exist in the world.”

The Japanese government said on Monday it would nonetheless move ahead with the relocation. For decades, Okinawans have called for the expulsion of U.S. troops from the island, which houses about two-thirds of the 50,000 U.S. troops currently stationed in Japan. Last year, residents elected a new governor, Denny Tamaki, who vowed to fight against the U.S. military presence.

Where else but babble would you hear about the fight against US imperialism?!?!

..txs wwwtt. you did see where the story came from didn't you? :)

Probably not considering I switch from my Iphone and laptop and how aware I am at the moment. From re reading my comment I made above, it sounds like I wasn't aware it was a DN story. Still not crazy about them. But I have been known to change my mind. Kudos for you, you caught me tripped up.

..no kudos please i wasn't looking to catch you. it just made me smile.

..i agree with your original comments by the way that there are few places compared to the many that don't report on these matters.

'Stop it!' Japanese women turn to app to stop groping on trains 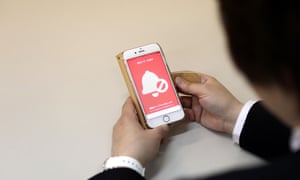 ‘Thanks to its popularity, the number [of downloads] is increasing by about 10,000 every month,’ said police. Photograph: Behrouz Mehri/AFP/Getty Images

Almost two decades after the introduction of women-only train carriages, female commuters in Japan are turning to technology to tackle molesters on packed rush-hour trains.

The Digi Police app enables victims of groping to activate a voice shouting “Stop it!” at ear-piercing volume or bring up a full-screen message reading, “There is a molester. Please help” that they can show to other passengers.

Digi Police has been downloaded more than 237,000 times since it was introduced three years ago – an “unusually high figure” for a public-service app, according to police.

“Thanks to its popularity, the number [of downloads] is increasing by about 10,000 every month,” said police official Keiko Toyamine.