So you're saying we haven't progressed very much since then, and that all this talk of democracy today is so much off brand baloney?

Quote:
British officials have condemned Gaddafi for murdering his people. There is just one thing wrong with this: Britain’s outgoing New Labour party and incoming Tory-Liberal Democrat “coalition” governments sold Gaddafi’s regime arms worth GBP 22,500,961 in the second quarter of 2010 alone, including [color=red]“ammunition for wall and door breaching projectile launchers (two licences); components for semi-automatic pistols; components for sniper rifles; crowd control ammunition (four licences); equipment for the use of sniper rifles”[/color].2 Would those British officials who support sanctions and the imposition of “no fly zones” on Libya support imposing the same things on London?

To give some perspective, Britain’s recent and direct historical involvement with Libya has resulted in the deaths of almost as many people as were murdered in the 7 July 2005 attacks in London. Naturally, the media and scholarship never make such comparisons, and doing so often provokes remarkable tantrums. In 1986, in response to the bombing of a German disco, for which Britain and America blamed Gaddafi, the US launched air strikes on Libya from British bases, killing at least 30 civilians, including Gaddafi’s adopted daughter. Gaddafi’s funding of the Irish Republican Army could have hardly been a concern for the Thatcher government, given that most financial and ideological support for the IRA comes from Boston, America. Can you imagine Margaret Thatcher directing the Royal Air Force to bomb Reagan’s White House?

I think they are operating more along the lines of pirate rules and skull duggery than United Nations guidelines. IOWs, trust no one.

I have been looking at a lot of photography of the conflict that is not presented in the main stream press, I have notice a lot former Soviet equipment and arms being used.

All governments, past and present are guilty of the bloodshed occurring today.

This way we will never be free, there is an endless cycle of violence that can never be broken.

More from the same article:

Quote:
“Although Gaddafi is murdering his people, the hypocrisy of Britain condemning such atrocities – when it is Britain that is arming them – is low comedy.”

And apparently they aren't buying Gadaffi's claim that al-CIA'da is there in Libya and raising heck. The Qaeda bogeyman is a ruse to be used only by the vicious empire when in need of an excuse to commit mass murder and even launch assassination attempts against Gadaffi himself a few years ago.

So exactly when should countries support revolts in other countries?

Other countries shouldn't. Supporting revolts by interfering militarily in the internal affairs of other countries is to commit aggressive war which is both illegal and morally wrong.

Fighting is not the answer.

It will be interesting to see if Ghaddafi re-emerges as an ally of Western powers if/when he crushes the rebellion.

He probably will for two reasons:

1. If he wins and remains leader, he is in H.W. George Bushs' words "The devil we know, [and the one we will continue to deal with.]"

2. If he remains in power, the Western powers will want to buy Libyan oil from him.

Fighting is not the answer.

Then look at what happened.

Gadhafi started a war against the people.

The people defended themselves, as they have every right to do.

"Foreign Minister Lawrence Cannon said Monday that Canada will consider all options, from tougher sanctions to military intervention, to rid Libya of dictator Moammar Gadhafi...  And he wouldn't rule out endorsing military intervention without the support of the UN Security Council. 'We all agree that Gadhafi must leave.'"

What a spectacle, some Canadian poppinjay by the name of Lawrence Cannon is flapping his gums on the world stage, rattling a saber and threatening Canada will unilaterally interfere in the affairs of Libya with Canada's tin pot military.

People need to sort out their differences through speech and other non violent events.

Laws do not transcend basic movements of might makes right and the US has actually been a far more agressive force alone then any european power was in the pre-UN era post feudalism.

But what about universal morality?

People need to sort out their differences through speech and other non violent events.

But what if people's asking for their rights to be respected, asking for liberty, democracy, equality and justice results in the government responding with violence and murdering them?

Many of the Libyan Army's soldiers joined the people as a result of dialogue and peaceful persuasion with and by the people(!)

At the very least, the people have the unquestionable and inalienable right to defend themselves.

For too long Gadhafi has been ruling by fear, threatening imprisonment, torture and death for "spreading sedition."

THESE ARE THE STAKES.

Obviously it's impractical and undesirable, as a rule, to intervene in any and all countries. Yet it appears that this line of thought goes something along the lines of: because x, y and z countries were allowed to suffer at the hands of a brutal despot a, b and c countries should too.

They are the self-appointed cops and mob enforcers of the world capitalist system. And apparently they have the full support of the cruise-missile left and the limousine liberals.

Who are you to determine when the people of said country ask for outside help they should be refused on ideological grounds?

Oh, I'll tell you who, an ideologically pure internet warrior. Well, you enjoy being a part of the "Ghadaffi left" and I'll be a member of the "cruise missle left."

You are describing an endless circle of violence. The oppressed of today will become the oppressors of tomorrow.

LOL, Fidel you're losing it with your imagine this themed posts... thats the Pittsbugh Pirates flag, a baseball team.

I wonder what Roberto Clemente would say about all this.

You are describing an endless circle of violence. The oppressed of today will become the oppressors of tomorrow.

Sometimes the things people have been denied the most are the things they hold most precious.

Take me, for example.

The military is a hierarchical and authoritarian organization, where one's superiors have the legal power to restrict the rights of their subordinates and make decisons that affect their life, death, physical and emotional well-being.

Do I therefore prefer authoritarianism, security over liberty, engage in personal power trips over others (or in other words, support inegalitarianism), support restricting freedom of the press and speech to prevent people from expressing "dangerous" ideas, support war and interventionism over anti-war and anti-interventionism?

No. I hold very precious and support liberty, human rights, representative (grass roots "people power") democracy, equality, freedom of the press and speech. I support anti-war and anti-interventionism over war and interventionism.

LOL, Fidel you're losing it with your imagine this themed posts... thats the Pittsbugh Pirates flag, a baseball team.

And? What's your point? My point was simply "pirates." I thought the picture of a pirate on the stars and stripes was well placed. Are you suggesting that I have smeared the Pirates ball club by associating them with Murder Inc and capitalizing blood for oil hounds from hell? I suppose the Pirates did not deserve to be smeared like that, but what else can we do to get the point across?

And? What's your point?

My point is you imagine if assertions are so way off base when compared to reality their comical.

@ al-Qa'bong: I grew up in Pittsburgh; I almost caught a Roberto Clemente home run when I was a kid... well that's the story anyways; it landed about 20 feet from me in the bleachers. I did have a glove with me.

Well it looks like even the blood for oil hound nations are reluctant to commit another act of aggression against another oil-rich country. The Gladio Gang realize that they are fresh out of credibility on both military and economic matters.

Now London, Paris and Warshington are seeking a UN resolution from the security council nations. Just one problem though and that's proof of need for a military intervention. And they're all out of WMD lies and "nurse nayirah" tall tales. No false flag threats of foreign based terror a la operation Himmler/Gleiwitz or even so much as a false Gulf of Tonkin attack this time. What to do? What phony excuse will the oil company conjure up this time, Bec? Any ideas?

Well I imagine they could always invade Canada to take your computer way from you... if a polar bear don't get you first 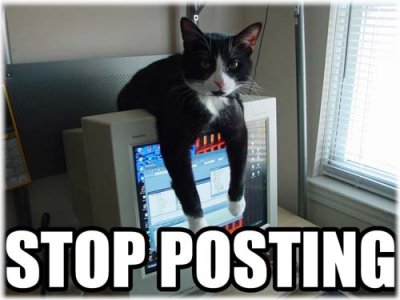 Too long ... please feel free to open the next chapter.