Thru some Belarusian facebook friends I've been hearing about the current demonstrations going on in Minsk..

Belarusians are protesting against rigging the results of the presidential election.

Pro-opposition presidential aspirants called on Belarusians to come to October (Kastrychnitskaya) Square in Minsk at 8:00 today to defend their stolen votes. Like all previous campaign held for the last 16 years, this Belarusian election campaign can be called neither free nor democratic. The opposition was not allowed access to vote counting; five-day enforced early voting was organized to make it easier to rig results (the early voting turnout was 23%); the opposition virtually had no access to state television and other media; independent observers report on ballot stuffing all over the country. The dictator obviously intends to continue his 16-year long ruling.

Democratic candidates Andrei Sannikov, Uladzimir Nyaklyaeu, Yaraslau Ramanchuk, Mikalai Statkevich, Vital Rymasheuski, and Ryhor Kastusyou urge Belarusians to struggle for the free and democratic future of Belarus and protest against cheat and fraud on the Square. 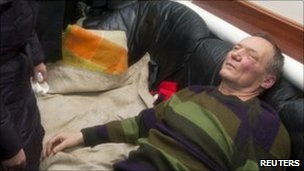 Opposition candidate Vladimir Neklyaev (left) was injured in the clash

Police in Belarus have violently broken up an opposition protest rally in Minsk which followed the country's presidential elections, reports say.

The clash happened as hundreds of demonstrators were attempting to march to the capital's main square.

Incumbent Alexander Lukashenko is widely expected to win the poll, which the opposition claims has been rigged.

Exit polls suggest he is far ahead of his nearest rival in Sunday's vote.

Under the authoritarian leader now seeking his fourth term, the former Soviet republic has never held a poll seen as fair by international monitors.

However, these elections so far have been much freer than in the past, correspondents say.

Nine challengers were competing with Mr Lukashenko for the presidency.

There will definitely be political changes... but no change of power in Belarus”

For the first time, state television aired a debate among the contenders opposing the president, who has governed since 1994.

Mr Lukashenko - who remains popular among large sections of the population - did not take part in the discussion.

Despite this, many in Belarus believe that the election day result has already been pre-ordained and the political thaw is merely window-dressing, the BBC's David Stern in Minsk reports.

"Lukashenko needs this to show to the Europeans because he needs money from Europe," Andrei Sannikov, one of the three main opposition candidates, said earlier this week.

"The economy is in very bad shape and he needs additional credits," he said.

Mr Lukashenko, who denies the opposition's claim, has said he is not planning to leave, whether by the ballot box or other means.

Police and armoured vehicles flooded Minsk central square in Belarus this evening in preparation for a standoff with the opposition, who plan to turn out in force to challenge early election results that give Alexander Lukashenko victory in the country's presidential vote.

Exit polls give Lukashenko, 72% of the vote; his closest competitor, the former deputy foreign minister, Andrei Sannikov, has just 6.33%. Nine candidates are challenging Lukashenko in the vote.

The opposition failed to unite around a single candidate to challenge Lukashenko, who has ruled the country since 1994 and has been dubbed "Europe's last dictator". They plan to join forces for a protest set for when polling stations shut that is expected to gather tens of thousands of people. "It's getting more and more tense," Yaroslav Romanchuk, a presidential candidate, said by telephone from Minsk. "We don't know what kind of a situation it will be as downtown is full of police."

Internet sites, including major email carriers such as Gmail and Yahoo, have been blocked. Opposition candidates complained that dozens of their supporters had been held since the eve of the vote.

Citing exit polls released by Inside, an independent polling agency, Romanchuk said Lukashenko had failed to garner the 50% needed to win the election without a second round. According to the survey, Lukashenko was polling at 38% this afternoon, while the nine opposition candidates combined stood at 43.5%.

Photos of the demonstration...

The offices of this opposition news website have been raided:

At 4.40 a.m. the door of the charter97.org website news office was smashed by special task force. Journalists managed to inform about the attack, and after that connemction was lost.

The last message from Natalya Radzina: “We all are in the KGB.”

The editor of the website, Natalya Radzina, and volunteers, were working the office. There is no more information about them so far.

Yes. Yet another "colour revolution".

The counting of ballots has been completed in Belarus, with preliminary results showing Aleksandr Lukashenko receiving almost 80 per cent of the votes in Sunday's election, which guarantees him yet another presidential term.

The highest-ranking opposition competitor received less than three per cent of the votes. Six per cent were cast for the "against all" ballot option.

With the turnout exceeding 90 per cent, the Central Election Commission has pronounced the election valid.

It is the fourth consecutive victory for Lukashenko as president, after 16 years in power.

On Sunday evening, thousands of opposition supporters flocked to the streets the Belarusian capital to protest the results of the election which they claimed was rigged.

Despite the efforts of the riot police to disperse the unsanctioned rally, Oktyabrskaya Square in the centre of Minsk was quickly flooded by people.

Later, the demonstrators managed to break the cordon, reaching the Government building. They smashed windows and attempted to break in, demanding that a second round of the election be held.

In an attempt to stop the protesters, riot police used stun grenades and batons. As a result, several opposition supporters and one of the opposition candidates were injured.

Vladimir Neklyaev was rushed to the hospital with a head wound.

With police not clearly distinguishing between protesters, passers-by and members of the media, several journalists did not manage to escape unscathed.

Among those injured were two of RT's cameramen, who were hit with police batons.

Lukashenko also voted, thanking his rivals for increasing his chances of winning this election.

"Frankly speaking, the opposition also played into my hands.I thank them very, very much for their thoughtless speeches and thoughtless canvassing," he said on Sunday, talking to international monitors at a polling station in Minsk, Interfax news agency reports.

He also noted that Belarus is not going to seek international recognition of its presidential election.

Fyodor Lukyanov of Russia in Global Affairs magazine expressed the view that Lukashenko was expected to win but not by so much. "It's not credible", he said. So, the regime is scared of the cracks in its support and that explains, perhaps, the excessive violence by the police.

Lukyanov also notes a rural/urban split in the voting in Byelorussia with more conservative voters in the rural areas supporting the status quo.

The other thing of note - I forget whether it was Lukyanov or one of the other commentators on the linked page above  - is that the European Union is expected to accept the results of the election. So, without outside support, a divided opposition claiming they will do what Lukashenko is doing "without Lukashenko", the demos will likely not go anywhere. The opposition is really doing a lousy job, politically, and some of them (according to one commentator) admitted/claimed they were running "to help Lukashenko".

Looks like another "colour revolution" - if that's the plan - is not in the cards.

Yeah, no Colour Revolution in the wings in Belarus.

Lukashenko is positioning himself for an amicable relationship with the west. He realizes that there are some minor issues with the Union of Russia and Belarus and does not want to lose any authority or control over Belarus. Entering into a close compact with Russia is somewhat problematic as it would decrease Lukashenko's control over Belarus. Thus, if he can cozy up to the EU, then hey...given its sclerotic policy makers in Brussels, he'll have an easy ride being their cuddly dictator pet just beyond the borders.

MINSK, Belarus — Ever since riot police officers crushed a large protest against apparent fraud in presidential elections here last month, the security services — still called the K.G.B. in this authoritarian former Soviet republic — have been rounding up people across the country for even the most tangential affiliation with the opposition.

Now, it seems, they have gone a step further.

The government warned recently that it might seize custody of the 3-year-old son of an opposition presidential candidate who was jailed along with his wife, a journalist. The authorities said that they were investigating the status of the child, who is now living with his grandmother, and that they expected to make a decision by the end of the month.

In 16 years as ruler of Belarus, President Aleksandr G. Lukashenko has often been called Europe’s last dictator. But the plight of the child, Danil Sannikov, may represent a new tactic in the government’s persecution of the opposition, one that harks back to the Stalin era, when the children of so-called enemies of the people were sent to orphanages after their parents went to the gulag.

“Even in my worst nightmares I could not have conceived that this could happen,” said the child’s grandmother, Lyutsina Khalip.

Thousands of protesters had filled a large square in central Minsk on the night of Dec. 19, incensed over Mr. Lukashenko’s claim of a sweeping victory in elections that independent observers deemed a farce. The police violently broke up the rally, which had been largely peaceful, arresting more than 600 people.

Within 24 hours, seven of the nine opposition candidates for president had been arrested.

Danil’s parents, Andrei Sannikov, a leading opposition presidential candidate, and Irina Khalip, a respected investigative journalist, were among those arrested, yanked from their car while Ms. Khalip was giving a telephone interview to a Moscow radio station. Mr. Sannikov was severely beaten and, his lawyer said, his legs were broken.