Rally for Democracy in Hong Kong

Will people please ignore this troll - or is it just too tempting to allow a shithead to divert any healthy positive discussion?

Ah, I am sorry Unionist.  I didn't want to upset you.

Massive crowd now in Admiralty, the main encampment by the HK gov't buildings, for what may be the last night of this protest. Police to enforce court injunctions.

Out of 514 interviewed via phone:

Quote:
A Day Among the Protesters’ Tents in Hong Kong : Few protest movements have the foresight, or the opportunity, to mourn their own ending before it has even happened. But on Tuesday Hong Kong’s pro-democracy street protests have been suffused with nostalgia, even before the police move in to clear the demonstrators’ last main stronghold, possibly on Thursday. On Tuesday night, thousands of people were coursing through the Admiralty protest camp, snapping pictures and snapping up mementos.

[...]Hong Kong residents have bitterly disagreed about the protests, but most would agree that they have marked a watershed. The demonstrations have spawned debates, clashes with the police and streets crammed with posters, art and forums that have exposed political, cultural and generational fractures in Hong Kong society...some protesters said there would be resistance if the police moved into Admiralty. But more, like Mr. Lau, said the time had come for the pro-democracy movement to move on and find other ways to advance their cause of free elections. “It is time to go home,” he said. “The power of the people is not only here. We have to find a new way. This is no way to put pressure on the government.” 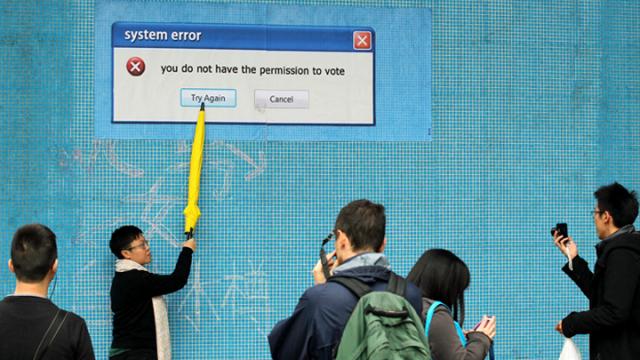 Protesters rally ahead of clearance

The massive crowds were there more to say farewell to this phase of protest, rather than resist police. A more radical splinter group is also saying it will save its energy for another time.

RDP wrote:
Cultural genocide is so much better than genocide.

How? In that the perpetrators can get away more easily? As with releasing toxic pollution, it's easier to get away with it if you dissipate, over a longer period of time and/or a larger space, the links between causes and effects. (I hear you saying the quoted sentence while sipping on a cocktail.)

I would not use the word "better" to describe the difference. One decimates a population quickly, the other creepingly. Lower life expectancy, higher suicide, murder and child mortality rates, missing aboriginal women, lower health and educational outcomes, reduction of choices and potentialities in life...sugar-coat incremental cultural genocide the way you want. Yes, things are getting better in some respects. In spite of the efforts of Canada's current federal regime, indigenous peoples are rebounding from the "capitalism" of the past century. (Your limitation to the past 100 years is rather arbitrary but I'll play along with it.)

To get this thread (it doesn't belong to me, but to anyone who wants to stay on topic in a reasonably civil way) back on track, the protests in Hong Kong are opposed to unfettered capitalism, devoid of democratic oversight, of the kind practiced in either colonial or post-handover HK up to this point.

[More here on how China is not small 'c' communist.]

Barricade clearance progresses very slowly this morning. Final passive resistors - students, politicians, citizens and at least one pop star - wait very patiently to be arrested. Little sign of violent resistance being prepared, but police are ready for it. The slogan for this day is: "We'll be back."
We're ready to be arrested, says (long-time pro-democracy politician) Martin Lee

Those umbrellas can be dangerous. 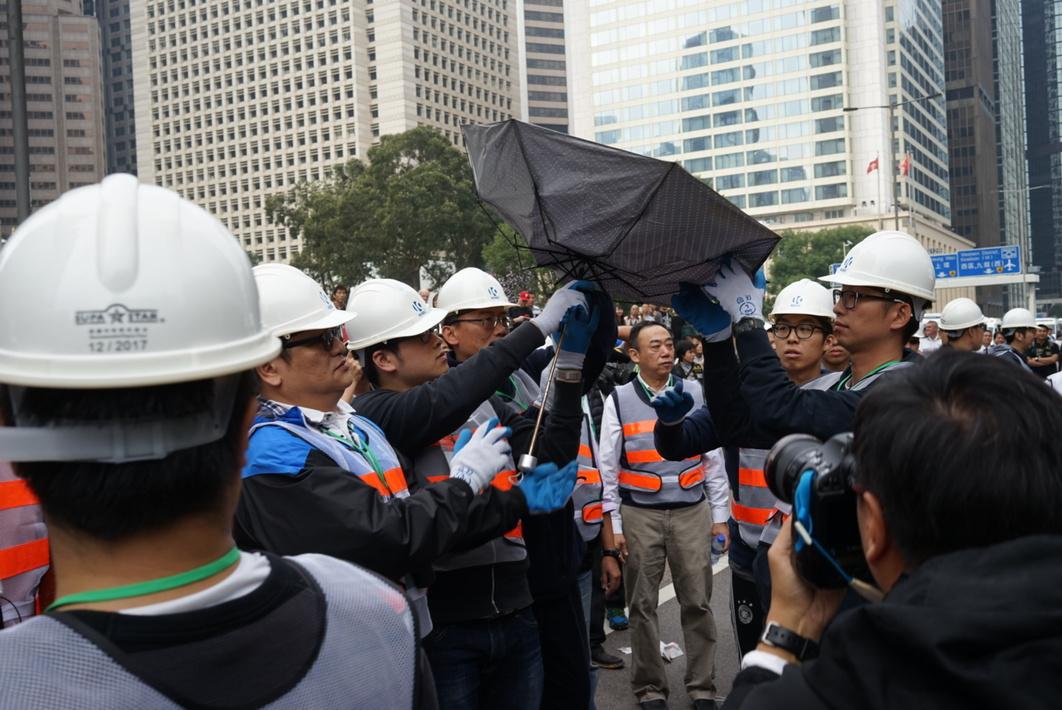 A large "Christmas Carolling Tour" makes its way through various streets tonight, bringing out the police. One message posted on A4 paper around the streets:

Quote:
Did Hong Kong’s pro-democracy protests really change anything?
The city’s youth has awakened: The biggest impact of the Umbrella Movement may be the collective empowerment of an entire generation. The young people of Hong Kong have surprised the public, and themselves, with their brazenness, tenacity, and organization—as well as willingness to clean toilets and organize trash.

The police are no longer the pride of Hong Kong: “I used to say ‘Thank you’ to police when I passed them,” said Sherman, a 34-year old social worker taking part in a final sit-in as the main protest site was cleared. “But these days, I have lost all of my respect for them.” Hong Kong people no longer have any institutions they can trust, she argued: “Even the police are not politically neutral. They are just a tool of the government to mute the voice of the people.”

Now everyone knows the Hong Kong government is impotent: “Now we have seen the worst side of our government,” said protester Owen Kwok, 31, the night before the Admiralty protest site was cleared.

Beijing wins the battle, but what about the war?: Will the protests, a fresh round of international scrutiny, and the defeat [of pro-Beijing candidates] in Taiwan, inspire some sort of introspection in Beijing? As usual with the opaque China Communist Party, it’s hard to say.

The smallest protest camp in Causeway Bay remains, but will probably be cleared next week.

Quote:
...The police cleared the Occupy sites and protesters on Thursday, arresting 247 people. The continuing occupation was beginning to lose support from the public, and there are still no concrete or clear steps towards electoral reform. But the umbrella movement is no failure. The protesters went the distance with the government for 75 days straight. They did so peacefully, from the very beginning to the bitter end. There was no looting, no rioting and, most importantly, not a single casualty. [ie, death]

...through their own hard work and smarts, the students built a community from the ground up...students in my university classes continued to hand in their assignments on time throughout the protests. Students also showed that they are not naive. In an unprecedented live debate lasting over two hours, student leaders went toe to toe with high-ranking government officials discussing electoral reform. After the debate, and up to this moment, the government has not given a legitimate answer to a simple question from the students: why can Hong Kong not have open elections?

The students are worried that having the right political connections is becoming a basic necessity for any kind of success. Political success under the proposed election framework is achievable only if you have the approval of Beijing. The students also understand that the right connections to government are a precondition for business success. There’s no other place in the world where it is more profitable to be a business person with the right political connections than Hong Kong, according to the Economist. It’s also disconcerting that Hong Kong has slipped to its lowest ranking on the corruption index since the handover, in 1997.

The students...know that open elections are an important step towards making sure the game won’t become completely rigged.

Hong Kong’s Occupy protests are far from over. Let’s raise our umbrellas

Thousands of people took to the streets of Hong Kong on Sunday in a reprise of anti-China protests of over a year ago, demanding to know the whereabouts of five missing people linked to a local publisher of books critical of Beijing's leadership.

Quote:
“Ten Years” has become a surprise hit across theaters in Hong Kong, tapping into fears in the semiautonomous Chinese territory over the erosion of local culture and civil liberties, fears fed most recently by the disappearance of five people connected to a Hong Kong company that publishes political books banned in the mainland. Since its general release in late December, most showings have been sold out. With a budget of about 500,000 Hong Kong dollars, or about $64,000, the indie production had raked in nearly 5 million Hong Kong dollars by Thursday, Mr. Ng said. On Friday, it received a best film nomination for the Hong Kong Film Awards.

“We didn’t even spend a dollar on promotion,” he said. “We initially thought we were only going to show it in private screenings and had never expected such huge demand.”

In its five short stories, each by a different director, “Ten Years” portrays the Hong Kong of the near future as struggling under the tightening grip of its Chinese Communist rulers...

Hard to know what's really going on here. The violence is out of line with the non-violent Umbrella Movement advocating full democracy.

I would not rule out an elaborate "agent provocateur" operation some day, in order to justify bringing in troops to douse the embers of Hong Kong's democracy movement. Not saying this is happening now, just that it's well within the realm of happening some day.

It's not too soon to squash a pro-democracy movement, as the disputed election is slated for 2017.

A tightly controlled election with requirements not to be seen as opposing the central government or the Basic Law which is Hong Kong's Constitution. Its not much of a democracy but it is as least as good as the US electoral college system and better than anything the British implemented in the 99 years they controlled the colony.

The video of the riot showed the police attacking rioters in the same way as the police in Montreal and Toronto attack peaceful demonstrators. That is not to excuse the government of China but instead to put it in context. When I went to a peaceful demonstration at the Olympics I came home with deep bruises from being forcefully pushed around by police in body armour.

The decision, which was approved unanimously on Sunday afternoon by the nation’s top legislative body, the Standing Committee of National People’s Congress, allows only two to three candidates to run in the race for Hong Kong's top job. And they have to obtain the support of at least half of the nominating committee members to get on the ballot.

What are Hong Kong's localists angry about? - BBC

Quote:
Government figures show that about 960,000 out of Hong Kong's population of 7.2 million live below the poverty line, making it the 12th most unequal place in the world...Itinerant street hawkers, in particular, are seen as one symbol of the income gap as their trade has traditionally been seen as a way out of poverty…Meanwhile, shop rents have grown increasingly expensive, which means food vending is now a dying trade. Many people believe the poor are being deprived of one legitimate means of income…But some also see the clearances of illegal hawkers, as happened in Mong Kok, as a failure by the government to recognise how integral they are to local culture, and a sign that the government has grown out of touch with ordinary Hong Kongers' desire to preserve their unique identity and freedoms.

...Politically, the current government, under Chief Executive Leung Chun-ying, is widely seen as pro-Beijing, a view that was reinforced by the crackdown on the 2014 pro-democracy protests…The perception of many localists is that after the collapse of the peaceful Umbrella Movement, more direct action is needed..."There are going to be more protests. But I urge you, my fellow Hongkongers, to persist.”