Anyway.  What do you think is doable, Unionist?  What kind of legislation do you think the Congress and Senate in the U.S. will go for?

Nothing, Tommy. They are a brutal assembly of invaders, occupiers, profiteers, and assassins. They will never go for anything. Since when did that become the criterion for what people should advocate and fight for?

And to Boom Boom's question, Obama will do nothing, so why ask what he can get?

Today is the second anniversary of the horror at Sandy Hook. How I wish my prediction had been wrong.

May the victims and families find peace.

And oh how I miss Boom Boom's sincere and gentle voice.

We're close to the 3rd anniversary.

And my sad prediction - that there is no movement in the U.S. for gun control - and that Obama will do nothing - remains, sadly, accurate.

So many more victims demanding justice, and so much more silence.

And yes, I still miss Boom Boom. More than ever, I think.

I'm horribly depressed about everything. All the killing, accusations against entire peoples, and the horribly harsh livng conditons nowadays. My friends who are in Paris now can scarcely get their voices out.

Just a reminder of how U.S. society sheds crocodile tears over massacres, then carries on. Obama has become a past master on this front.

I hope to keep commemorating the anniversary of Sandy Hook. We should really commemorate others as well.

Otherwise, the latest massacre always tends to look "unique" (as if it's the "motives" of some individual that are the cause, rather than the effect). And all the same dead-end conversations are replayed.

Sandy Hook has been getting a lot of mention lately. It would be nice to call it a "bookend" to Orlando, but that would imply that this is at an end. The judge agreed with attorneys for Madison, North Carolina-based Remington that the lawsuit should be dismissed under the federal Protection of Lawful Commerce in Arms Act, which was passed by Congress in 2005 and shields gun makers from liability when their firearms are used in crimes.

Advocates for gun control and against gun violence have criticized the law as special protection for gun makers. It became an issue in the presidential campaign this year when Hillary Clinton, now the Democratic nominee, criticized then-challenger Bernie Sanders for his support of the law in 2005. Sanders, a Vermont U.S. senator, is now backing a bill to repeal the law.

Interesting - didn't know that about Bernie Sanders. I wonder what the background is. Here's part of the story:

Yes, much as I like Sanders, this is a black mark against him - he should have looked towards the other end of Lake Champlain in this respect, as he's always done about national health care. People on the Québec side of the border don't like hunting (and fishing) any less than their cousins in Vermont, but you don't need an assault weapon to hunt deer.

For those who are anti-gun control, it is, if not the top, near the top of the issues that matter most to them. They'd crawl over broken glass if the NRA gave them the word to vote. For most of those who are pro-gun control, which is most people by varying degrees, it is not a priority issue.

Has anything changed since then, josh? Anyone else close to the U.S. scene?

"Political cowardice involves failing to act on what you believe is right because of political concerns. An example of that is the decision among Democrats to hold no votes on gun control between 2009 and 2011 when they had huge majorities in Congress and held the White House..."

Nothing will change in that shameless murderous country. 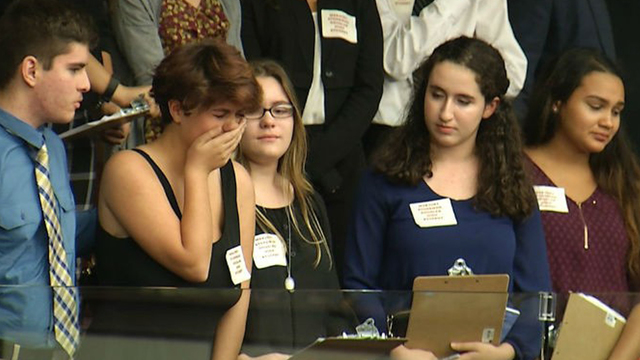 I would hope that even as they understand the problems with nearly-unrestricted gun ownership, that they also know it's also not some shadowy "other" owning those guns or compulsively voting for anyone who will let them continue to own those guns.  I don't care how big the NRA's war chest is; if adults in Florida (or, pick any state) keep making it clear to representatives that they don't want anything getting between them and their gun, those lawmakers are likely to keep representing them as asked.  The students need to go back a step.

I think I meant to say:

Nothing will change in that shameless murderous country.

Nothing will change in that murderous country.

Nothing has changed except this past week's perfect trifecta of hate:

Most of the Jewish victims of the other racist scum were seniors too. The two brothers in late middle age had an intellectual handicap (though they managed to live in the community and play a useful part in it).

At least pipe bomb guy was an incompetent terrorist. And yes, they are terrorists.