Quote:
which clearly puts the Constitution above the president.

There is no "Constitution" independent of some court's interpretation of that Constitution.

Is the constitution above the president? Yes or no.

Does the president get to interpret the Constitution as he/she wishes? Yes or no.

In his first days as President Trump's pick to lead the Federal Communications Commission, Ajit Pai has aggressively moved to roll back consumer protection regulations created during the Obama presidency.Mr. Pai took a first swipe at net neutrality rules designed to ensure equal access to content on the internet. He stopped nine companies from providing discounted high-speed internet service to low-income individuals. He withdrew an effort to keep prison phone rates down, and he scrapped a proposal to break open the cable box market.

No difference between the parties. 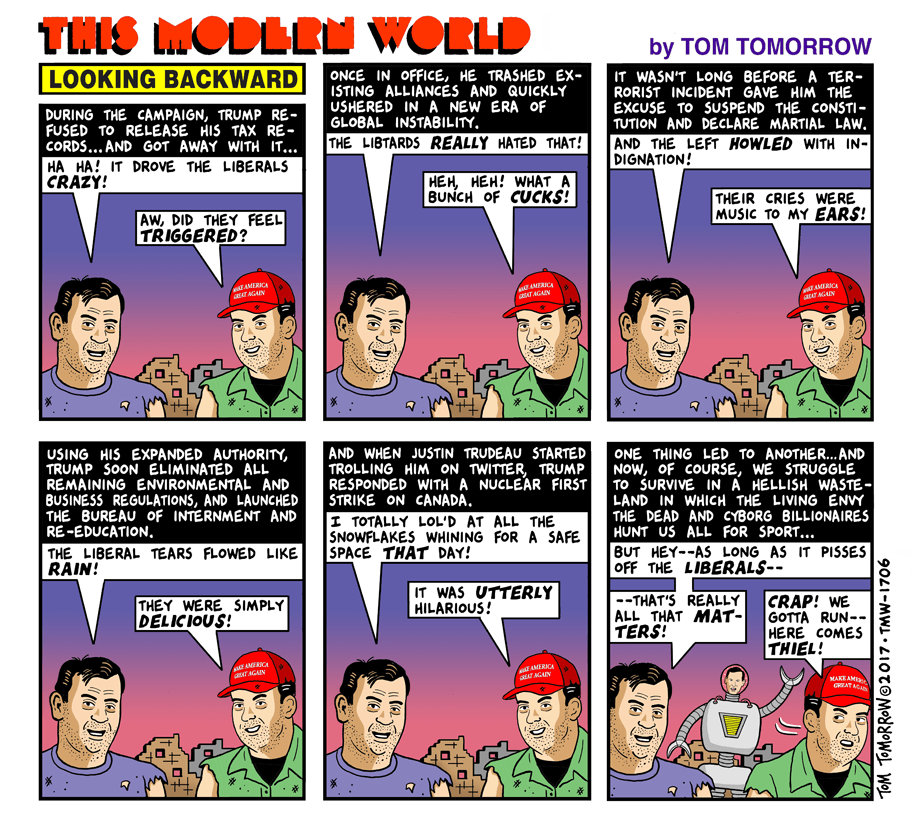 I'm always amused by the American liberal fantasy, alluded to non-ironically in that cartoon, that Justin Trudeau is gonna step forth as some heroic truth-to-power speaker against Trump. I'm guessing not many of those liberals know that Trudeau is on the same page as Trump when it comes to pipelines.

Trump is nothing if not a masterful performer. He managed to play both sides of the foreign policy coin, signaling “business as usual with extra jingoism” to hawks and “less interventionism” to doves.

Unfortunately, as with Obama, many doves — even some libertarians, who ought to have known better — fell for it. And some of them still ARE falling for it.

That can't be right. The last leader of the United States won the Nobel Peace Prize...

That can't be right. The last leader of the United States won the Nobel Peace Prize...

The problem is this is not coming from a person who wants to reduce killing and thuggery. He is just more open about that being his style.

This is not about an admission on the way to an improvement so much as a normalization to modify expectations and use the threat more effectively. People should not confuse the latter with the former.

After all terrorism is about saying you do it, so people get scared and do what you want. Trump is more like a terrorist than he is a reformer.

I agree that Trump probably isn't channeling Noam Chomsky, but I don't know if his comments were as calculated as you suggest. I think O'Reilly probably just had him on the spot, and the only thing he could think of at that moment was the old tu quoque, except applied to his own country.

If he had been bragging about what a thug he's gonna be, I don't think he would have said "Do you think we're innocent?", since that language implies disapproval of the violence. As well, my understanding is that the example he gave of American killing was the Iraq War, which he now says(inaccurately) he was always against. If he had been trying to valorize the violence, I don't think he would have used as an example something he has gone on record(if only belatedly) as opposing. More something like "We killed a lot of people to win World War II" or "the Cold War" or whatever crowd-pleasing historical example he could think of.

"A first meeting between Donald Trump's defence secretary and his Canadian counterpart began well on Monday - so well that, within just a few seconds, there was already talk of kissing and hugging..."

"Since both US and Canadian trade negotiators just finished extensive negotiations in the stillborn TPP agreement, they have some 30 chapters of rules and trade commitments to draw on as models with which to modernize NAFTA."

On the off chance that Trudeau and Trump have nothing much to discuss when they meet next week, - this juicy tid-bit has just surfaced:

Sarah Palin touted as US ambassador to Canada? You betcha!

On the off chance that Trudeau and Trump have nothing much to discuss when they meet next week, - this juicy tid-bit has just surfaced:

Sarah Palin touted as US ambassador to Canada? You betcha!

That would be crazy. Canadians would laugh at her and might even want to throw things.

So who would we send as Canadian amabasador. Justin Bieber?

And let him continue to do his show on the side  -- Talking to Americans and his rants.

Bannon, who’s now ensconced in the West Wing as President Donald Trump’s closest adviser, has been portrayed as Trump’s main ideas guy. But in interviews, speeches and writing — and especially in his embrace of Strauss and Howe — he has made clear that he is, first and foremost, an apocalypticist.

In Bannon’s view, we are in the midst of an existential war, and everything is a part of that conflict. Treaties must be torn up, enemies named, culture changed. Global conflagration, should it occur, would only prove the theory correct. For Bannon, the Fourth Turning has arrived. The Grey Champion, a messianic strongman figure, may have already emerged. The apocalypse is now.

“What we are witnessing,” Bannon told The Washington Post last month, “is the birth of a new political order.”

Now, a believer in these vague and unfounded predictions sits in the White House, at the right hand of the president.

“We’re gonna have to have some dark days before we get to the blue sky of morning again in America,” Bannon warned in 2010. “We are going to have to take some massive pain. Anybody who thinks we don’t have to take pain is, I believe, fooling you.”

“This movement,” he said in November, “is in the top of the first inning.”

Nice to know that a lunatic is the top advisor to a mentally unstable megalomaniac.