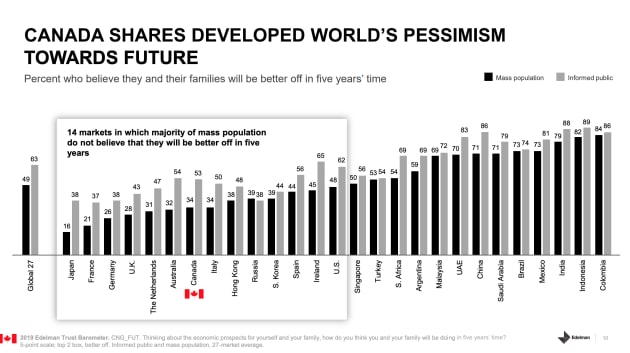 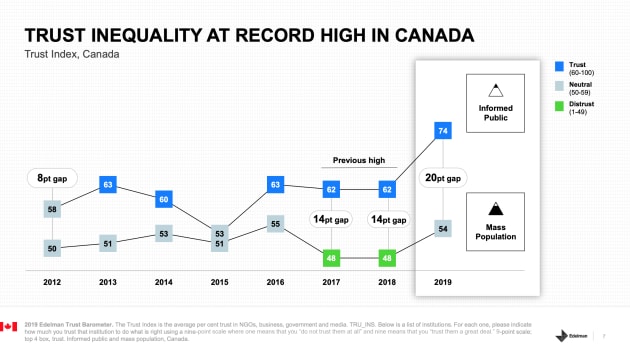 This has led to a jump in media engagement. Forty-two per cent of respondents were described as "consumers" of news, meaning they checked it weekly or more.

Kimmel said this was reassuring, since her team was "shocked" last year when it found that 54 per cent of the Canadian general population was "disengaged," or consuming news less than weekly.

Kimmel has trouble with math.  If last year 54% were disengaged, then 46% were engaged whereas only 42% are engaged this year.

Checking the news once a week or more means very little. Of the 42% that is consuming news my bet is most of them are catching up on disasters, crimes and human interest not politics.

A more informative survey would question specific knowledge of major events over the past year or the identity of major political figures. For example, is Judy Wilson-Raybold the current or former minister of justice or minister of indigenous affairs?  Who is the leader of the Conservative Party? (multiple choice) What is SNC Lavelin accused of?

The article is lacking so I looked farther and found this:

I hope we can delve more deeply into the numbers and the political implications. This, for example, is disturbing:

Despite a high lack of faith in the system, there is one relationship that remains strong: “my employer.” Fifty-eight percent of general population employees say they look to their employer to be a trustworthy source of information about contentious societal issues....

In addition, 71 percent of employees believe it’s critically important for “my CEO” to respond to challenging times. More than three-quarters (76 percent) of the general population concur—they say they want CEOs to take the lead on change instead of waiting for government to impose it.

This is why I get impatient with the desire for political parties to focus on specific issues of injustice rather than the big picture. People trust CEOs more than they do government.

Does it not shock anyone else that people are looking to CEOs for information and change?

Do you not see that as long as CEOs have so much support progressive politics is doomed?

The demise of trust in government is not a demise in the popularity of mainstream political parties. It supports the right wing argument for small government and low taxes.  After all, CEOs are more trustworthy.

"I think you can make the tax system take a much higher portion from people with great wealth," he said, adding, "These great fortunes were not made from ordinary income, so you probably have to look to the capital gains rate and the estate tax if you want to create more equity there."