The UK voting system is "Hung" out to dry, Part 3

Quote:
I think that average Brit is probably incensed

But you have no evidence to offer. On the other hand, Clegg's party is receiving thousands of emails telling them to stand firm on PR. If this was the kind of "inside the beltway" issue you use an reason not to do anything to advance PR, it would not be making headlines around the world. 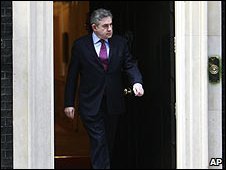 First Minister Carwyn Jones says Gordon Brown is to be "admired" over his move to step down as Labour Party leader.

The only people who are incensed are the right-wingers but who cares a tinker's damn about them!!!

I really don't believe that Tories and Liberals will be able to ignore Labour and workers this time around. Things will not be like they were under Maggie and John. The next few years won't be the inglorious 1980s or even the roaring nineties. I think very many people have no idea how badly this ideologically driven debt crisis will become in the next few years. If they don't like the way public services are run now, then just wait a few years.

The two political heavyweights looked close to ditching words altogether in favour of fists as they argued over Gordon Brown's resignation statement live on air.

Some districts may even rerun.

Don't know if this will change things. Weird things happened, like a reporter beaten up for investigating a house where multiple mailin ballots were sent from.

..it is possible that pr is not an end game but something you do on your way to democracy. pr is better than fptp and possibly a step towards something likened to participatory democracy. which may or may not look like this.

Gordon Brown was ready to quit. All he needed was signal from Nick Clegg

How is my life supposed to be better because they bring in PR in the UK and there is a sudden influx of wishy-washy LibDems who stand for nothing in particular except that they want an electoral system that gives them more seats! (more seats for what??)

Under PR you're life would be improved as the possibility of having radical Thatcherite policies would be reduced in a government where the Thatcherites are held back by the wishy-washiers.

An alliance between the wishy washys and NDP almost gave us the Kelowna Accord and national day care. It also helped keep Harper out of power.

It is those with strong ideological points of view that tend to be the most successful and influential leaders.  Thatcher, Reagan and Trudeau were enormously successful as leaders because they had a vision and an ideology that they believed in, regardless of whether or not it was unpopular with a large segment of the population.

Because they were strong leaders who stood for something, rightly or wrongly, they all stayed in power for many years and had large amounts of followers.  Their policies all significantly changed their countries.

Wishy-washy leaders tend to be less successful and influential because they lack a vision or an ideology - if Brown or Cameron had advanced an identifiable ideology rather than trying to appeal to everyone, they would have had more successful elections.

Cameron would probably have a majority right now if he had run a campaign on the strong ideas that Margaret Thatcher did.

Under PR you're life would be improved as the possibility of having radical Thatcherite policies would be reduced in a government where the Thatcherites are held back by the wishy-washiers.

An alliance between the wishy washys and NDP almost gave us the Kelowna Accord and national day care. It also helped keep Harper out of power.

There is a down side too. If the UK had had PR in 1945, there would have been no Labour majority and the Tories and the Liberals would have stopped the postwar welfare state from ever getting off the ground. Similarly, Medicare would never have come to Saskatchewan since the Liberals, Tories and Social Credit would have systematically voted down any CCF attempt to bring it in. The Lib Dems in the UK are the like the "blue dog" Democrats in the US - don't trust them not to side with the Tories when the chips are down.

If we want to prevent Tory rule - what's wrong with the alternative vote - if all Labour supporters vote Labour 1, Lib Dem 2, Tories 3 and if all Lib Dem supporters vote Lib Dem 1, Labour 2 and Tory 3 - we would probably never have another Tory government again!! and we would also avoid having crackpots from the UKIP and the BNP getting into parliament.

Clegg may have been smarter than the Labour leader, Brown, if the latter agreed to step down without getting anything for it. OTOH, political parties in the UK have an easier time forcing a leader out - as I understand it.

Realistically, Gordon Brown has to go either way. It's a precondition for the Liberal Democrats to talk and it would also be required if the Conservatives end up in government.

Clegg is doing one hell of a negotiating job playing one off against the other to get the most progressive deal for the voters.

If the Cons are cut out of power, Cameron will be thoroughly thrashed by his own party.