"For his birthday, NATO started anti-terror drills near the large city of Vinnytsa in the Western Ukraine..."

The Vibrancy of Ukrainian Democracy (vid)

Question: When White Nationalists in USA do the torchlight march thing, it's a problem, but 20k nationalists doing it in Ukraine is ignored?

Putin Answers A US Journalist on Ukraine (and vid)

"In the four days since a serving president posted fake content online pertaining to a Nazi warcrime, none of the usual self-appointed fact-checking outlets have challenged its veracity."

Why Deny The Ukrainian Nazi Connection?     -    by David Pugliese

"The Russian embassy in Ottawa has created quite the controversy with its latest tweets about Nazi monuments in Canada. The Russian tweets were quickly denounced as 'fake news.'

But in this case the Russian tweets aren't fake news. They are accurate.

While Bnai Brith doesn't seem to have any issues with the members of the SS Galizien Division, others clearly do..."

If anything, Wes Mitchell may well prove to be Victoria Nuland on steroids..."

And should get along just fine with Canada's own version, Chrystia Freeland.

US Congress To Spend $4.6 Bn For 'Reassuring NATO Allies As Anti-Russia Hysteria Mounts

"Russophobia is costing American taxpayers a bundle of money, and US politicians and defense contractors couldn't be happier. Hundreds of millions more in 'security assistance' is to go to Ukraine..."

"More and more mercenaries are joining in to 'save Europe from extinction..."

"Some of the participants in the coup are going public about the matter because the people who had hired them cheated even them..."

Ukraine: A State Run By The Rich, For the Rich

For now the conflict intensifies and the political elite continue to get richer while the broader population continues to suffer.."

Trump and Trudeau get Ukrainian craft beer named after them

So what's been happening in the Ukraine, since this last entry?

In February 2015, after a summit hosted in Belarus, Poroshenko negotiated a ceasefire with the separatist troops. This included conditions such as the withdrawal of heavy weaponry from the front line and decentralisation of rebel regions by the end of 2015. It also included conditions such as Ukrainian control of the border with Russia in 2015 and the withdrawal of all foreign troops from Ukrainian territory. The ceasefire began at midnight on 15 February 2015. Participants in this ceasefire also agreed to attend regular meetings to ensure that the agreement is respected.[184]

On 1 January 2016, Ukraine joined the Deep and Comprehensive Free Trade Area with European Union,[18] which aims to modernize and develop Ukraine's economy, governance and rule of law to EU standards and gradually increase integration with the EU Internal market.[185]

NDPP answer if you must with your nonsense, but I am hoping others will respond.

Attempts at reasoned discussion don't seem to last too long in this thread. That's part of the reason why I do most of my talking on this subject elsewhere.

Trump urged to sell $50 million in lethal weapons to Ukraine

"20 minute tv documentary broadcast on the Matrix network in Italy on Nov 15, 2017. The documentary contains explosive new evidence concerning the sniper killings of dozens of protesters and police..."

How Russia Hawks Are Selling Trump On Sending Weapons To Ukraine

"President Donald Trump's top advisors are closer now to achieving what seemed unthinkable at the start of his presidency: Shipping millions of dollars of US weapons to Ukraine's embattled military. Ukrainian Foreign Minister Pavlo Klimkin, asked if he expected to receive US military weapons, said it was simply a matter of time. 'I believe that we will definitely get more defensive weapons and military equipment in the future,' he said at the Halifax forum in Canada..."

'Impeachment Instead of Revolution!' (and vid)

Two CIA assets in hot contention. Looks like Pravy Secktor is with the Georgian Tie-Chewer...

'Anti-Corruption' in Ukraine Up In Smoke

"Kyiv's Western backers are facing uncomfortable questions following a string of actions exposing the hollowness of the Ukrainian government's fight against corruption. The good news for supporters of the Ukrainian government is that most people in the West will never know of the latest bad news events in Ukraine due to the tight censorship by the 'Russia truthing' mainstream Western media..."

"Thousands of people supporting Mikhail Saakashvili, the fugitive ex-Georgian president turned Ukrainian opposition figure, have once again taken to the streets of Kiev to take a local cultural center by storm. Some 30 police officers were injured in the incident."

Which was condemned by the Canadian ambassador (see vid). And Canada and Freeland plan to send heavy weapons into this shitstorm? Perhaps it's necessary again to stoke a war to preserve the regime... 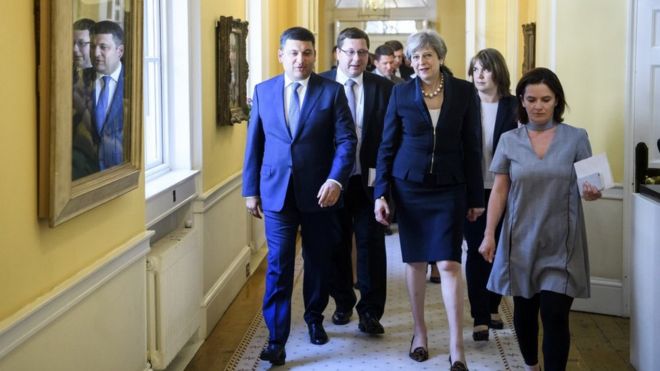 Ukraine's main security agency has arrested a senior government translator and accused him of being a Russian spy.

Stanislav Yezhov, who accompanied the country's prime minister on numerous trips, was detained in Kiev on Wednesday.

In July, he was part of a delegation that visited UK Prime Minister Theresa May in Downing Street.

A statement posted on the SBU website [in Ukrainian] said: "Law enforcers found that an official was recruited by Russian intelligence agencies during a long-time foreign mission."

They said Mr Yezhov, who is facing charges of treason, used "special equipment" to gather information which he then passed on to his Russian handlers.

Ukraine's Prime Minister Volodymyr Groysman posted about the arrest on his Facebook page.

He said Mr Yezhov was "an official in the government's secretariat who was working in the interests of the enemy state [Russia] for a long time". He worked in the cabinet of ministers where he would have had access to sensitive government information. Prior to this, he served as a translator for Ukraine's former president Viktor Yanukovych. 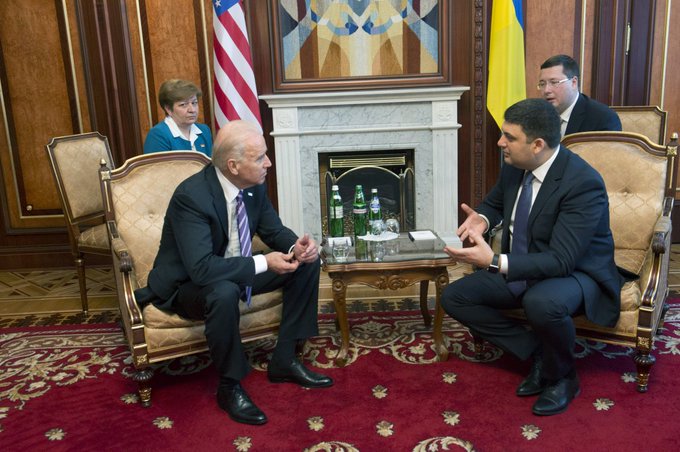 Mr Yezhov had worked as a senior interpreter for Ukraine's government for while. Here he is interpreting in a meeting with then US VP Biden in 2016.

Ukraine Accuses Russia of the Unthinkable: Terror Attacks Against Its Own People

According to NorthReport and The Observer, 'one of the terrorist attacks in Ukraine that was perpetrated by the FSB, according to the Ukrainian spy chief were 'fires and clashes in Odessa in May 2014 that killed 48."

As these two excellent documentaries reveal, the reality is rather different...

"For arming Ukraine, we can be sure Trump will be heaped with praise from the same domestic sectors that for more than a year have been denouncing him as 'Putin's puppet'."

It's been available on Vimeo since last summer.

They say the price of freedom is eternal vigilance.

TRNN: The US Is Arming and Assisting Neo-Nazis in Ukraine

"Known as a bastion of neo-Nazism, the Azov Battalion has received teams of American [and Canadian] military advisors and high powered US-made weapons..."

"The new Ukrainian law on the reintegration of Donbass means an end to the Minsk peace deal and will likely lead to a new war in the southeast of the country, Russian Senator Konstantin Kosachev warned..."

US Arming Neo-Nazi Military Units In Ukraine (and podcast)

"The United States is arming and training neo-Nazis in Ukraine, all while Congress is debating a prohibition on doing just that. Max Blumenthal joins Brian and John."

"...According to Jewish sources in the country - the authorities are encouraging a glorification of anti-Semites."

"...According to Jewish sources in the country - the authorities are encouraging a glorification of anti-Semites."

Does this mean that from now on we can take "Jewish sources'" word for what constitutes anti-Semitism?

"Anti-communist campaigns in Eastern Europe aren't about building a more democratic society - they're about rehabilitating the far right..."

"Obama VP Joseph Biden brags about how he rigged the judicial system of another country..." (and vid)

"...A pleasure, as always, to speak with my friend Poroshenko."

"Approx. 50 additional CF members arrived in Ukraine this morning making this the largest OP UNIFIER contingent since the start of the mission to help train and mentor the Ukrainian military in its efforts to maintain sovereignty, security and stability."

"Member of Ukraine's neo-Nazi Azov Battalion ordered to pay a fine for slitting throat and murdering pedestrian in Mariupol who offended him."

"The US Department of State has signed off on a $47-million sale of 210 shoulder-fired javelin anti-tank missiles requested by Ukraine..."

"If the Ukrainian Army wants to play a role of a living target for the entertainment of the Pentagon, then why not?"

"A member of the Ukrainian parliament has made groundbreaking claims about the events in 2014 that culiminated in the overthrow of the country's govt..."

Ukrainian community members in Ottawa are demonstrating against BOTH the Ukraine government and the Russian government this weekend in Ottawa.

"Member of Ukraine's neo-Nazi Azov Battalion ordered to pay a fine for slitting throat and murdering pedestrian in Mariupol who offended him."

Considering that happened in November 2016, and the Canadian training mission started in August of the same year, and they weren't offering a course in using knives in self defense, unlikely.

But do keep up the spin.

"Ukraine's parliament has approved a bill requiring lawmakers to lock up their guns before entering the chamber. The bill passed Tuesday obliges lawmakers to leave weapons and explosives in lockers. The move follows last week's statement by Prosecutor General Yuriy Lutsenko, who accused lawmaker Nadiya Savchenko, a former military pilot who became a national icon after spending 2 years in a Russian prison, of plotting an attack on parliament with grenades and automatic weapons. The accusations followed Savchenko's claim that Lutsenko was covering up the killings of protesters during Ukraine's 2014 uprising. *

*It seems some of the  'heavenly hundred' were sent there by the incoming US-installed Nazi coupsters themselves...

"What Irony! Nadia Savchenko, a former hero of Ukraine's 2014 'revolution' who was pardoned by Russia after being convicted of abetting the murder of two Russian journalists, has been arrested on terrorism charges. In Ukraine. What a mess!"

No Nazi Problem in Ukraine

Who cares as long as they're anti-Russia right?

Who cares as long as they're anti-Russia right?

Who cares as long as they're pro-Putin right?

The Personal is Political For Canada's FM

Chrystia Freeland, Canada's top diplomat put Ukraine's travails at the hands of Russia [atop] the agenda at a G-7 meeting in Toronto..."

The Banderite Bandito does her thing. Grandpa would be proud...

"This is what happened when BBC reporter tried to question the Mayor of Odessa, who is suspected of involvement in Ukrainian gangsters buying luxury properties in central London."

"Kiev has warned Moscow of 'geopolitical consequences' if Gazprom ceases gas transits through the territory of Ukraine. The gas-transit contract between Kiev and Moscow expires in 2019. Gazprom said on Tuesday that the contract will not be extended under any circumstances. The company added that the gas transit may remain but only if Ukraine provides the necessary conditions for it. Moscow says Kiev has proven itself an unreliable partner in gas transits over the years..."

Congress Members Urge a US Stand Against State-Sponsored Holocaust Denial

"Ukraine is promoting glorification of Nazism at the government level." - Avigdor Eskin

"The head of the Ukrainian Jewish Committee, Eduard Dolinsky, who posted footage of Soykina's anti-Semitic rant on Facebook wondered if the nationalist was hinting at new 'Jewish pogroms or an outright Holocaust. 'Should we believe her or not? Should the Jews start packing or does the country have a law enforcement system?' Dolinksy wrote. On Tuesday, the World Jewish Congress (WJC) sounded alarms over an 'unprecedented' rise in anti-Semitic incidents in Ukraine..."

"They are barbarians! Tell Ukraine and Poroshenko to stop killing our children and our people. Cuz we love our Donbas..."

"We call upon all member states of the OSCE not to  become accomplices in the Kiev regime's war and crimes, not to provoke a disastrous military conflict in the center of Europe, Russia's permanent representative said at the meeting of the OSCE Permanent Council in Vienna, Austria. The Russian diplomat added that the so-called 'counter-terrorist operation' against the self-proclaimed republics of Lugansk and Donestk was a nationalist stunt with inhuman objectives and criminal means to reach them..."