In all fairness, the entire UN should walk out when Netanyahu begins to speak. (my opinion)

Abbas is giving a short history of Palestine since the creation of Israel: displacement, wars, massacres.

I watched CBC Newsworld's live coverage of speeches by both the president of Iran and Egypt - about 20 minutes for Mahmoud Ahmadinejad (out of a 35 minute speech) and about 15 minutes by Morsi.

Mahmoud Ahmadinejad called for a new world order encompassing peace and security for all, and condemned the excesses of capitalism, and made a shot at Israel's Zionists for threatening war against his country.

Morsi went straight into the injustice of the Palestinian situation and the unlawful occupation of their land by Israel, and called for Jerusalem as the Palestinian capital.

I wonder if the Americans felt some discomfort at Morsi's comments, given that they pay Egypt over $2billion a year to keep the peace with Israel.

World Bank says the PA faces a $400million shortfall - the situation is dire.

He's praising the long history of Israel. Will he defend his treatment of Gaza and the West Bank?

Wow - the bastard is getting applause.

Rejects unilateral declaration of statehood by Palestine. Statehood must be negotiated by a non-militarized Palestine.

"The evil forces of radical Islam" - backed by Al-Qaeda - but he extends a hand of freindship to regular Muslims who live in peace.

A CBC commentator said Abbas accused Israel of "ethnic cleansing" but I didn't see that comment in the closed captioning of the session. Maybe it was from a different translation service.

Abbas and Netanyahu this afternoon - both speeches will be carried on CBC Newsworld, maybe not in their entirety.

Abbas wants a sort of enhanced observer status for Palestine; Netanhayu is going to draw a "red line" over Iran's nuclear program.

Netanyahu always gives a fiery over-the-top speech, and today should include dramatic fireworks.

ETA: commentators on CBC and CNN are saying Netanyahu is trying to draw in the USA into joining Israel in a first strike against Iran, but Obama is not biting - for now, anyway.

ETA: Commentator on CNN said Netanyahu will be very critical of all the countries that did not walk out during  Ahmadinejad's  address yesterday.

"A nuclear Iran will arm Al-Queda"

Iran has killed Americans everywhere (Iraq, Afganistan, etc...), has embedded thousands of missiles and rockets in Gaza and elsewhere.

Nothing imperils Israel more than a nuclear Iran.

Netanyahu says he's been speaking against a nuclear Iran for 15 years - but now the hour is getting late.

A clear red line must be drawn against Iran's nuclear weapons program - like JFK drew a red line in the Cuba missile crisis, like NATO drew a red line around Europe against the Soviets (not sure I got that right).

He referred to Abbas' speech as "libellious" which I guess is his way of disregarding it entirely. If he truly wants peace in the Middle East, let him take the first step, and stop obstructing the Palestinians from statehood.

ETA: CBC Newsworld carried both Abbas's and Netanyahu's speeches in their entirety.

Our prick of a Prime Minister is miffed at being turned down for a Security Council seat, so he's been boycotting the UN entirely. He met Abbas today, is meeting Netanyahu tomorrow. He's given a speech in NYC tonight where he's accepting a faux 'Statesman Of The Year" award - that speech will be online around 9pm tonight.

ETA: On P&P tonight his foreign policy spokesperson said the gov't supports Canada's longstanding two states solution for Israel and Palestine, but is against a unilateral declaration of statehood by the Palestinian Authority.

Question: what is wrong with a unilateral declaration of statehood by Palestine anyway?

"Sheesh...looks like Wile E. Coyote trying to explain his next clever plan to catch the Roadrunner. That picture would get laughed out of a University Political Science class much less the United Nations."

Abbas: "I draw attention to 535 terrorist attacks by Israel on Palestine in the past year". And "...continued killing and abuse by the occupying power".

Abbas is including a long list of outrages perpetrated by Israel against the Palestinian people in the Gaza Strip.

Israel has destroyed 575 buildings in the PA (Palestinian Authority) in the past year, over 500 Palestinians lost their homes.

"The actions of Israel are fueling the extremists."

Abbas: "By their actions, Israel is demonstrating they reject the two-state solution (Israel/Palestine side by side)."

"Israel has completely dominated and stolen Palestinian water aquifers, and our best agricultural land, as well as all land, air, and sea access to Gaza"

"We are committed to non-viloence and we reject terrorism"

Calling for an end to colonization by Israel of Palestinian lands.

The International Community in the UN, through the Security Council, have an obligation to end this conflict.

"A free and independent Palestine is the sacred right of the Palestinian people" (applause).

"The occupation by Israel is the sole obstacle to an independent Palestine".

Benjamin Netanyahu's decision to use a cartoonish bomb diagram at the U.N. this afternoon to help demonstrate the Iranian nuclear threat may have been, as Buzzfeed's Zeke Miller suggests, a clever way to go viral and get his message some attention. At the same time, if you're trying to convince the world in general, and the United States in particular, to take Iran's presumed pursuit of nuclear weapons more seriously, maybe using a prop straight out of Rocky and Bullwinkle isn't the way to go.

On my Facebook feed this morning: "...And if Israeli intelligence thinks that’s what a real bomb looks like, maybe their other projections are off as well."

US Police Indifferent to Assault on Iran Diplomat

Who Supports Terror? (and vid)

Netanyahu Bombs at the UN

Of course, Netanyahu has looked like a bizarre version of Paul Revere for years now. (As he himself said yesterday at the UN: “I’ve been speaking about the need to prevent Iran from developing nuclear weapons for over fifteen years.”) No one, or almost no one, believes that Iran is a vast nuclear threat and that the United States (or Israel) has to bomb it in weeks or months or, as Netanyahu suggests, at the latest next summer. Not the Obama administration, which is treating Netanyahu as if it wishes it could haul out a straitjacket and a syringe. Not the Israel national security establishment, which is almost universally opposed to a strike on Iran. Not the Iran Project—which represents a cross section of the American national security establishment and has laid out, in detail, why there’s no need to go to war against Iran.

But few people, other than The Nation, are willing to say that Netanyahu might actually be crazy. To be sure, Netanyahu is a sly one, and his bomb-rattling over Iran has served at least one useful purpose, as I’ve pointed out repeatedly, namely, he has focused the world’s attention away from Palestine. Half the world is so concerned that Bibi Netanyahu might bomb Iran and thus trigger a vast conflict in the Middle East, sending oil prices skyrocketing and many thousands to their deaths, that it’s walked on tiptoes around him. It’s long past time to stop that. If Netanyahu isn’t actually crazy—and, in the process, whipping up the deep-seated, unstable fears of the Holocaust among his supporters—then he’s a really good actor.

Boom Boom - it has been a long time since I visited Babble. Can't say I really missed it. You get a little crusty after you get kicked out by some moderator who says they will restore your privileges "when I get around to it". Never happened.

But this thread has been great; quite entertaining actually. Had a few belly laughs at the cartoons and the irony. I am in complete agreement with everything you say. You may have a slow speed dialup, but at least you go beyond 140 characters.

Random thought here - is Twitter a measure of IQ, except on an adjusted scale?

Been a long time, Diogenes. How have you been? 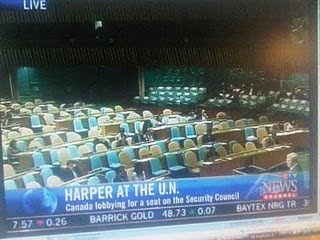 One of the reasons Harper took a pass on addressing the UN General assembly...

It did not go so well the last time... 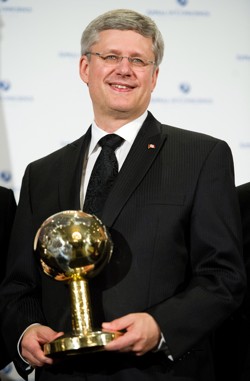 But it's really nice to see that he picked up another bowling trophy in New York City. Gonna have to enlarge the that trophy case at 24 Sussex.

Tony Clement has some ideas. He has a cousin who does $80,000 gazebos and Tony thinks he could make a real nice trophy case too.

So I tried to edit a post... didn't work so well. It seem I have developed a stutter.

John Baird spoke this morning, criticized the UN, Syria, and Iran - and then went on to condemn criminalization of sexuality - homosexuality specifically.

In the meantime these are his friends.  Who cares about gays when you have hereditary rulers willing to "forge strong cooperative ties on security matters."

Saudi Arabia operates under Sharia, or Islamic, law and punishes homosexuality with sentences of corporal and capital punishment.

Two years ago, Saudi authorities toughened a law banning the hiring of gays and lesbians.

“Emo” subculture has also been condemned in many Islamic countries. Iraq has been seeing a spate of murders of young men dressed as “emos” since February.

“Saudi Arabia has lost an honourable man of great achievement who has dedicated his life to the security and prosperity of the people of Saudi Arabia.