The European Elections are just around the corner

It's actually their call about revoking Article 50, not yours.

Quote:
As we are running out of time

Maybe he’s using the majestic plural aka the royal we?

Or maybe her majesty the Queen wants to revoke Article 50?

We are getting there, and this is dated Mar 30

There is now a 40% chance of Brexit being scrapped, says Goldman Sachs

Brexit had rapidly turning into the world’s biggest freak show. Shakespearean missed his calling by omitting to write about this unfolding tragedy. 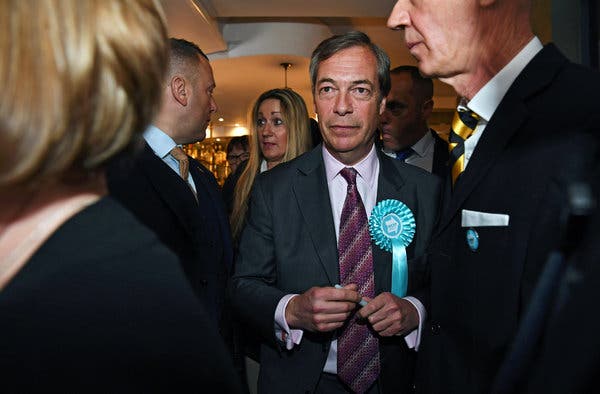 Obviously the Referendum was a huge mistake. The question is what is the quickest and best way to reverse it.

If we vote to Remain on June 23rd it is the end of the steel industry in this country. Simple as that. We must Leave EU.

'We risk ending up with no Brexit at all'

The Remain forces are too splintered and they need to get together under one banner as it will be the only successful way to fight the right-wingers.

PM says MPs have 'one last chance' to back her deal

Maybe Israel should join the EU? ; )  I’m not sure how Farage would feel about that? Israel already belongs to UEFA and Eurovision. 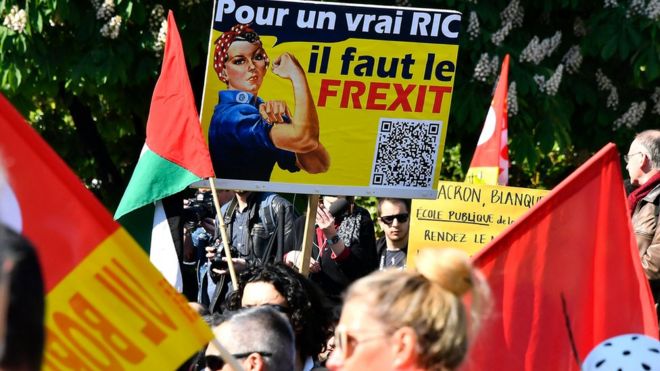 Image captionWhile these May Day marchers wanted to leave the EU, it is no longer policy for Marine Le Pen's far right National Rally in France

Remember that domino effect Brexit was predicted to trigger back in 2016?

Frexit (France leaving the EU), Italexit (Italy walking out the door), Nexit (the Netherlands following suit) and so on?

Fast-forward almost three years and here we are, on the eve of the European parliamentary elections - and although Eurosceptic parties are expected to make a strong showing at the polls, there's not a peep amongst them (UK parties remaining the exception) about leaving the EU.

Why have European voters gone off the idea?

In part, this is down to a growing awareness that the world out there is downright unpredictable: with President Trump in the White House; Russian President Putin at large around the European corner; looming trade wars; the environment in a mess; and the threat of mass migration to this continent from poorer parts of the globe.

The conclusion amongst many in Europe is that it's safer to stick together. According to opinion polls, the EU is now more popular than it has been since the early 1980s. 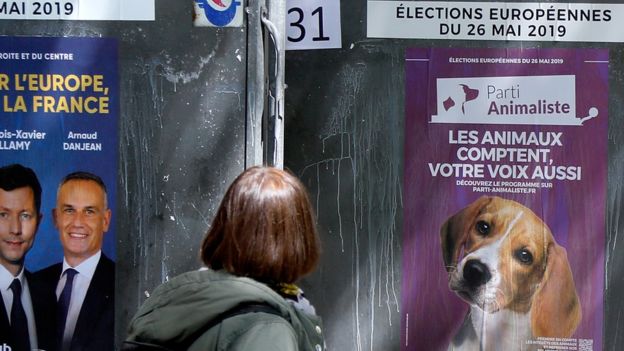 Image captionIn France, many of the billboards outside polling stations have not been filled ahead of the election

But there's another big reason that leaving is no longer so appealing: Brexit.

Europeans have been shocked, and quite frankly put off, by the social divisions driven through British society by the 2016 referendum, and by the destructive political tangle in what is traditionally revered across the continent as "the mother of parliaments".

Alice Weidel, one of the leaders of Germany's Eurosceptic AfD party, said recently that she regretted her group's flirtation with "Dexit" (an EU exit for Deutschland, the German word for Germany). Her feeling was that it lost them potential voters.

So, ahead of this week's election for the European Parliament, Europe's right-wing nationalists - including Marine Le Pen of France, Italy's firebrand deputy prime minister Matteo Salvini, and the AfD - have been calling to "change the EU from the inside" rather than walk away from it altogether. 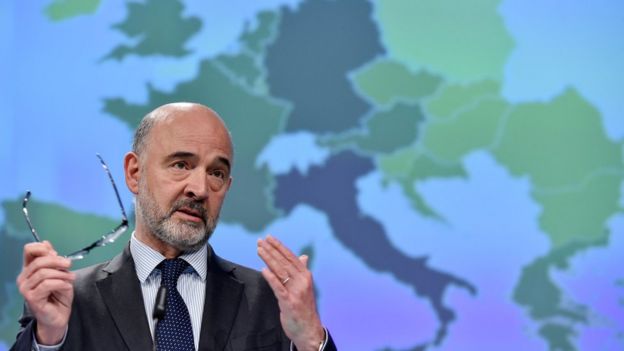 After the vote, they hope to become the third largest faction in the European Parliament. And they have the EU establishment rattled.

EU Economics Commissioner Pierre Moscovici describes these elections as the "most delicate and most dangerous ever". He told me the nationalist Eurosceptics threatened to "destroy the EU as we know it".

After she and her European colleagues had finished with the EU, she told me, she was sure that those who had voted Leave in the UK would want to join their new "European Union of independent nations".

But opinion polls, plus relations between all these nationalist groups (some are warm towards Moscow, others hostile; some want a distribution system for migrants arriving in Europe, others hate the idea) suggests Mrs Le Pen and her colleagues may find it difficult to get enough votes to transform the EU as they wish, never mind being able to work together effectively enough in European Parliament.

Rather than the screaming headline "surge of the far right" to define these elections, I'd opt for: "Hunger for change". 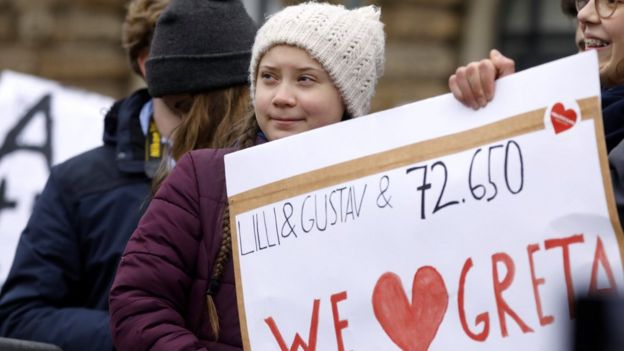 But not everyone is looking to the nationalist right for answers.

The far left, the populist left (like Spain's Podemos), single issue parties and environmental groups also expect a boost. The Greens dream of becoming kingmakers in the new European Parliament too.

It's very likely that we'll see a similar trend to one we've witnessed in general election after general election across the EU: a slap in the face for traditional political parties that have governed Europe since the end of World War Two.

The EU's Big Two - the governments of France and Germany - are jumpy.

Haemorrhaging votes in Brussels will further weaken Chancellor Merkel and President Macron at home. Both leaders have kept an extremely low profile during the European election campaign.

This when - you'll remember - Emmanuel Macron presented himself as Mr Europe in his push to become French president. Rather crushingly for him, the polls in France have his centrist alliance neck-and-neck with Marine Le Pen. 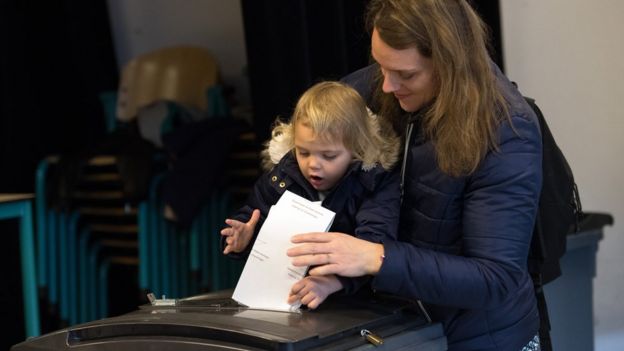 The traditional centre-left (social democrat) and centre-right (Christian-democrat/conservative) factions may be in danger of losing their overall majority for the first time, but they'll still probably emerge as the two biggest groups.

Yet this threatens to be a very splintered parliament.

Finding consensus to make or change laws will be a challenge when the popular shout for change is at its loudest.

Still, let's not forget, while the European Parliament plays an important role, the real power to reform the European Union, or change it from within, lies not with MEPs but with national leaders: the prime ministers and presidents of the EU's 28 (27) member states.

Nobody here is allied with Nigel Farage, and you don't have to be anti-Brexit to fight bigotry and xenophobia.

You do as you wish Ken.

If it were me, and I found myself allied with right-wingers, I would be seriously questioning what in the world I was doing. And the more I learn about Brexit the more alarming the scenario, including serious job losses and inflation impacts on senior''s pensions, appear to be.

Brexit fears are back and the pound is paying the price

I am not "allied with right-wingers".  I'm allied with reality-the reality that Brexit can't be stopped.

Nobody has to obsess on the unwinnable fight for a second referendumm to prove they're not allied with Farage.

It's pointless to fight a losing battle on this.

If anyone is allied with the far right it is the rejectionist remainers who are enabling their rise by refusing to implement the decision of the people, and thereby giving them fuel.

UK heading for another extension in October

They tried it Brexit obviously was a huge mistake It’s time for Brexiters to lick their wounds, accept the reality and that the people involved with Brexit are the one percenters that are already damaging the working people and the poor, and get back to working with the rest of Europe and keeping the peace

An election in which the Brexit Party is likely to win in a landslide is not a proxy on Brexit?

Oh, and North, you aren't British, so you really shouldn't be talking as if you're entitled to give people there commands on this.

How many more prime ministers will The UK burn through before they put a stop to the Brexit insanity?

It’s time for the UK to cut its losses, put out its self-inflicted absurd Brexit fire, and get back to working with the EC for the betterment of its citizens

We move closer to Revoking Article 50  or No Deal Brexit

There is no mandate for a no-deal Brexit!

I expect we will be hearing from Farage soon enough!

Now it’s a fight to the finish!

There is nothing in the legislation that states the government has to implement the results of the 2016 referendum, and in 3 short years what with Farage beating his drum, the loss of jobs, the drop in the pound, etc. look at the mess the UK is in now

Exception for the promise made to the British people.

It is the legislation what counts

Politicians made the same promise in the 1975 referendum.  Its called a binding, if informal, contract between the people and their representatives.

As I have said Farage, Johnson and Trump will soon deliver for you