"At GE17 Labour won 40% of the vote on a pro-Brexit platform. Since you began promoting 'Peoples Vote', UK Labour has dropped 15 points. You are responsible for damaging Labour's polling and poor European election results."

The writing is on the wall now for Labour to back a 2nd vote and support Remain, that is, if they hope to win the next election which would be helpful.

Politically it would be best to go for the Conservative / Brexit Parties' jugulars and demand Revoking Article 50 so it will be clear where Labour stands. Farage was clear, very clear, and that is why he won!

The Scottish Labour leader, Richard Leonard, has openly backed a second EU referendum and said he would vote to remain, as he sought to fend out a torrent of criticism after his party lost both its MEPs in a humiliating rout in the European elections. Leonard has written to Scottish Labour members to say:

As leader in Scotland I accept that constitutional issues have cost us electorally over the last five years and that trust in us has been eroded. We can and we will rebuild that trust.

My intention is to begin to set out a planned way forward over the coming weeks. Starting now, with firmly stating that I back the option to remain and that any Brexit deal should be ratified by a second public vote, one that has clear and credible options for remain and leave.

Leonard is likely to be pressed hard to confirm he wants this new stance on a second EU vote and backing remain to become Scottish Labour’s official policy, particularly at the weekly meeting of his MSPs at Holyrood on Tuesday.

If he does do so, that will boost increasing calls from the shadow cabinet today for Labour to embrace a pro-remain stance but put him at odds with Corbyn, the UK party and pro-leave groupings inside the Scottish party.

Leonard faced a furious backlash from party activists and parliamentarians, with calls for an emergency meeting of the party’s Scottish executive, following the worst election result for the Scottish party since 1910. It lost more than 200,000 votes last Thursday compared to the 2014 European election, coming in fifth behind the Scottish Conservatives.

His pro-remain critics, including Ian Murray MP and Martin Whitfield MP, have accused him of allowing the Scottish party to again become a “branch office” of the UK party under Jeremy Corbyn. They are likely to be furious Leonard ignored repeated calls to adopt a much firmer pro-remain stance before last week’s election.

Senior party sources say they repeatedly told Leonard the party would suffer heavily in the election unless they did so, though those sources acknowledge they underestimated the extent of the backlash from voters.

Here is an article from the other side of Labour which I do not agree with but....

it's healthy to listen to other points of view.

This isn't about Brexit. Backing remain now would wreck Labour

It's hard to look at yesterday's European election results in the UK, which was for all intents and purposes all about Brexit and see majority support for revoking Article 50. Adding together Brexit, Conservative and UKIP votes yields 44%, Greens, Liberals, SNP and Change UK only 36%. Clearly even if Labour's vote is mostly Remain not all 14% of it is. I simply don't see 50%+1 support for revoking Article 50 were a second referendum to be held on the subject. Labour has paid the price for its wishy-washy position but it is probably the only position it can actually sustain right now.

That's just propaganda as the EP UK vote had confusion written all over it.

Why do you think Farage says the Cons will not complete Brexit? It's just more right-wing nonsense to try and scare them into doing it.

The latest polling shows Remain now in majority territory and growing that lead as well.

It's hard to look at yesterday's European election results and see majority support for revoking Brexit. Adding together Brexit, Conservative and UKIP votes yields 44%, Greens, Liberals, SNP and Change UK only 36%. Clearly even if Labour's vote is mostly Remain not all 14% of it is. I simply don't see 50%+1 support for revoking Article 50.

Farage is saying that because if the Tories do, his party will be like a balloon with the air let out.

Yesterday’s vote was meaningless with 2/3 the turnout of the 2016 referendum. But it’s no surprise that the remainer propagandists are huffing and puffing to make something out of nothing.

Farage just wants Brexit so he will say anything to anybody if he thinks it will further his cause. He is somewhat charasmatic and wants to controls the agenda in ever discussion. He is one of the world's biggest bullshitters though, and doesn't do very well when you get into specifics.

I oppose Farage and everything he represents.

What is significant is that in 2016 Leave won by 4% and presently Remain is in the lead by 4%,

Which is what the polls were showing before the 2016 vote.

What is significant is that the people have voted to leave.

What's significant is that 2 wealthy right-wing one percenters Farage and Cameron were and still are playing games with the UK electorate.

I don’t think there’s any chance the Conservatives are going to revoke Article 50. If they did I think they would lose most of their voters to the Brexit Party and basically become extinct.

This is a truly amazing breakthrough but also inevitable.

Referendum may be only way out of Brexit deadlock, says Hammond 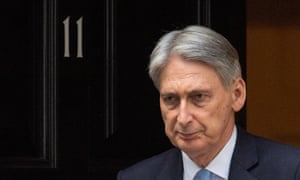 The chancellor, Philip Hammond, says his preference is for parliament to reach agreement over EU departure. Photograph: Dominic Lipinski/PA

Philip Hammond has become the most senior Conservative to signal he might be prepared to back a second referendum, piling pressure on Tory leadership candidates backing no deal by warning they could lose a vote of no confidence.

In a significant intervention, the chancellor said the only way of breaking the Brexit deadlock might be to put the decision back to the people, either through a general election or another referendum.

His comments suggest there could be growing openness among some soft Brexit Tories to a second referendum, meaning a majority for it in the House of Commons would not be impossible if Labour were to shift its position to unequivocally back a people’s vote.

“It will be a stain on parliament’s reputation if at the end we have to admit that we have been unable to agree how to discharge the [Brexit] mandate from the people,” Hammond told BBC Radio 4’s Today programme. 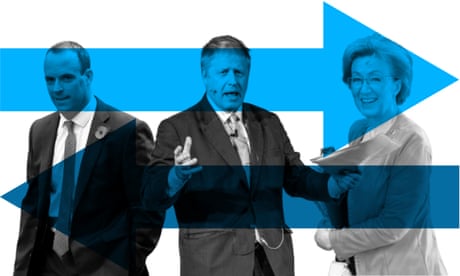 Tory leadership contest latest odds tracker: who's up and who's down?

“But if we do get to the point when we have to admit that parliament can’t resolve this issue then clearly it will have to be remitted back to the people. I am not sure the general election can resolve the question for the simple reason that both the main political parties are divided on the issues.”

Asked if he could support a second referendum, he said: “My strong preference would be for parliament to resolve this issue but if parliament can’t resolve it then parliament will have to decide how we remit it back to the people, whether it is in the form of a general election or a referendum.”

Hammond also hardened his previous warnings that he would be prepared to vote against his party’s government if the next Conservative leader decided to take the UK out of the EU without a deal.

He told Sky News it was not a move he would make “lightly or enthusiastically”, but that “national interest trumps the party interest”.

Caroline Spelman, the Tory MP who worked with Labour’s Jack Dromey to pass a successful amendment in the House of Commons opposing no deal, said Hammond’s words should be heeded by leadership candidates.