All but resigned to a Trump general election loss, donors are focusing instead on saving the GOP-controlled Congress.

Don't these huge negatives for Congress mean the GOP is is in big trouble there?

Don't these huge negatives for Congress mean the GOP is is in big trouble there?

No, people say they hate Congress, then almost everybody gets re-elected 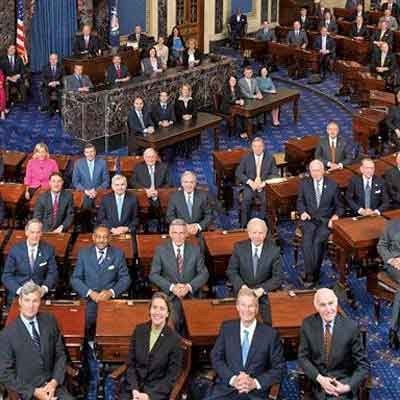 Will the GOP keep the Senate?

Presently the 100 seat Senate is comprised of:

44 Democrats & 2 Independents that vote with the Dems

Staggering, but the extreme right-wing forces in society are laser-focused on their mission.

The GOP rigged the House: Even a massive Donald Trump defeat wouldn’t give Democrats control

GOP redistricting post-2010 was built to withstand even a landslide loss. The week's hot political story is fantasy

Obama plays the Trump card on the GOP

As the president tells it, Donald Trump is the embodiment of what he's been up against in Congress.

NorthReport wrote:
Unfortunately for Clinton Pivit is forecasting that the GOP will retain control of both Senate and House this year

Predict It and IEM are predicting that the Democrats regain the senate.

Bernie has a big problem becuase he running agaisnt 2 people one official and unofficial. Hillary is the official rival but Obama is the unofficial rival.  Bernie's message is that there are major problems with the economy but he can only go so far with that message.  Bernie has to hold back from really opening a can of whipass on the system.  Because Obama has been at the head of system for 8 years, how can he criticize that system that Obama has been running effectively without going after Obama.  You can not because democracts voters are fond of Obama so Bernie is trapped in a box. Any move that tries to be critical of (policies that raise questions about how Obama's time is failure in office) Obama is used by Hillary to point out to the Bernie is not democract and he is not loyal to Obama.  And worst any attacks on Obama no matter as mild makes it sound that Bernie  supports the GOP.  For better or worst Hillary is destroying Bernie on this issue as yet he has no answer.  Hillary wrapped herself in the Obama legacy and move by Bernie open room between him and Obama is used by Hillary to attack Bernie as a disloyal to Obama and the democratic party.

If Bernie was running with GOP president in office he would destroy Hillary on the ideas.  But Bernie can only go so far with critcism of the Democrat party and Obama.  But Trump is railing agaisnt Obama and he does not have Bernie problem.  Bernie is talking about SOME of the issues that Trump runs on and same thing can be said Trump in reards to Bernie issues.   When Bernie talks about these issues is building a voting block that will utimately will be able to expolitted by Trump if he is the GOP candidate.  This voting block(independents and some democrats) I think will side with Trump over Hillary.  I believe he is better prepared to deal with Trump is the general but is trapped in box in Democratic nomination run.  I really hope that he can pull this off but this fundenmental problem has to addressed I am not bright know to figure out how.  Although I have heard surrougates of Bernie using similar talking points in the interviews talking about that criticism of system that Obama ran is not an attack on Obama.

On the 21st feb,earlier post i predicted a hillary vs trump fight for prez and that trump will beat hillary. In the above the post I foreshadowed that trump will go after Bernie supporters.

In the article above trump is quoted as saying The next morning, Trump said on MSNBC: "Bernie Sanders has a message that's interesting. I'm going to be taking a lot of the things Bernie said and using them."

It feels good to be right. I ready to double down and say that trump will win over Hillary.

If Trump starts talking like Sanders that is the end of his business career. Carl Icahn says the markets will crash unless there is fiscal stimulus.

This is ugly, if proven true Trump is finshed. This seems to be a civil action rather than a criminal case.

A tea partied bites the dust

Quote:
HRC may not even be the "lesser evil".

Hillary Clinton: a letter to America by Philip Roddis, August 3, 2016

The Sheriff himself is running behind.

Thanks to Donald Trump, the number of Latinos registering to vote is growing, which gives Democrats the momentum they need not only to oust local crank and Sheriff Joe Arpaio in 2016 but also—potentially—longtime incumbent Sen. John McCain.

What do people here think of Congresswoman Tulsi Gabbard?

Tennessee man taken into custody after threatening to murder Tulsi

Dem senator calls out Trump: ‘Blood will be on your hands’ if one of your supporters kills Clinton

Whatever Trump said yesterday, his supporters know he’s privately agreed with them all along.