Where are all the fat-cat teachers in all of this?

Their silence is deafening!!!

What is your point with the provocative title? Is it sarcasm or what? I happen to love education and respect the educators.  The Tyee article you linked to pointed out that the campaign is being jointly led by three people one of them a Professor.

Also here is a some stuff from the Living Wage Campaign website. Signing the petition would be a good thing to do.

In the meantime, the Campaign is starting a living wage dialogue on campus beginning with the launch of the report on Feb.20 at the SFU Burnaby campus with McCarthy Flynn, SFU Professor Marjorie Griffin Cohen, and John Bannister, CUPE 3338, discussing the issue.

Lat year the Living Wage for Families Campaign, in conjunction with a number of groups in SFU, undertook a survey of low wage workers in the University.  Following on from this process the ‘SFU Living Wage Campaign’ was formed with the aim of  persuading SFU to become the first Living Wage Campus in Canada. As the first step in this campaign we would like to invite you to the release of the report:

About: This community-based collaborative research report assesses the extent and nature of low wage poverty experienced by people working in Simon Fraser University (SFU) and explores the options open to SFU to address this issue. This event will be the first of a series of dialogues with all members of the SFU community around this issue and provide an opportunity to explore how SFU can ensure that everybody in SFU earns a Living Wage.

Take a look at any university in Canada and you'll find badly paid sessional instructors. Those would include TAs, who are often hired as sessionals.

In my experience, sessionals - TA or otherwise - are paid crap, and shoulder most of the workload. Yes, they allow Associate and Full profs more time to do research work (covered by grants that pay a pitifully small amount to RAs), but the whole issue speaks to the academic hierarchy and internal politics.

I think there is a problem with tenured faculty, who enjoy some of the best job security in the country, failing to stand up adequately for sessional lecturers (who are usually in the same union or association), TAs and other public workers. It's not universal, of course, but it's systemic. That said, I think "fat-cat teachers" is anti-labour language which feeds into many right-wing talking points and stereotypes. I'd prefer not to see that kind of language on babble, but I know NR is an ally and comes from a pro-labour POV.

Agree with Catchfire. But I hate complex issues. Where's black and white when you need them?

One thing I don't understand is "contracted workers". Are we talking (in the case of custodians, food services, etc.) about employees of contractors rather than direct employees of SFU? That's the only way I can understand having "no employee benefits".

Yes Unionist that is the case at SFU.  Please see thread on the Living Wage Campaign to see what is being done to try and rectify that.

Professors in universities remind me of doctors in the health care system. Both groups demand more than their fair share of the available wage pie and are often arrogant about their rationale for that. However I can't imagine a health care system without doctors nor a higher education system without professors.  Both of those groups believe they deserve to be in the top 1% or better in our economy and both go to work every day with extremely exploited workers who don't even make a living wage.

I kinda love some academics because they think creatively and their ideas and academic rigor can make a real difference to the world.  Even if they are overpaid.

Dr. Hertzman was a Canada Research Chair in population health and human development, and a professor in the School of Population and Public Health at UBC. He was awarded the Order of Canada last month.

Friend and colleague Jim Dunn called Dr. Hertzman the “ultimate blend of scholar and advocate,” noting that he made a complex subject accessible by adding the element of humanity.

“He brought a body of knowledge that was somewhat sequestered in clinical studies and experimental studies and really mainstreamed it for the policy audience and the general public at large,” he said. “The conversation that we have in this country about healthy child development – we don’t always act on it – is far more sophisticated than it was 15 years ago, and Clyde was a huge part of that.”

In a statement posted to its website, HELP said Dr. Hertzman’s influence in the fields of early child development, population health and epidemiology has been significant locally, nationally and internationally.

I think it's a really bad idea to point to "overpaid" physicians and professors as being even a little part of the problem in our health care and education systems, respectively. Besides any other reasons: it's not true.

Likewise, the plight of contract workers needs to be addressed by unionization and legislation (the latter including effective successorship provisions that defeat attempts at evading decent conditions by tying the certification to the contractor while leaving the contracting institution shrugging its shoulders).

There are no shortcuts that I have encountered.

Anyone know how B.C.'s successorship provisions work (or not) in the case of employees of contractors, when there's a change from one contractor to another?

What Unionist said -- at the university where I do most of my (paid) work, undergraduates played a role in helping food services staff to unionize. I do take issue with the sarcastic title of this thread, though, as I consider myself an academic (albeit contract), and having just lost half my summer teaching, am not feeling much like an ivory tower fat cat at the moment.

The successorship provision is very weak and the HEU has had to reorganize the same work every time they flip a contract.  My wife thinks one place has been organized four times because of new companies coming in shortly after the old company had signed a collective agreement.  To allow for that the HEU contract was altered in breach of the Charter. 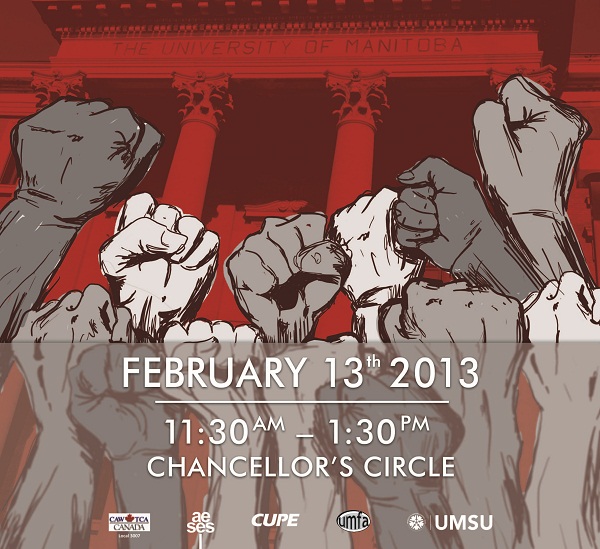 Nice to see the campus workers' unions, the students' union, and the University of Manitoba Faculty Association uniting in common cause:

Don't ya just love those academics?