But discovering that lithium-ion batteries tend to overheat? That’s like Scott’s fatal decision to go with ponies instead of sled dogs.

There is a splendid 20/20 clarity in the study’s sad little sentence, “Boeing should have chosen the right people for the job at the outset.” Sometimes I think the secret of hiring is that people are either intelligent or they’re not, whatever the job is.

Outsourcing the outsourced has a cost: it overstretches the link between parts and the final product. It’s a risk British consumers took when they bought cheap burgers made from meat outsourced all over Europe, which turned out to be horse, not beef. And now they’re retching.

Consumers paid a price in quality when they demanded cheap airfares. They worshipped the god of cheap and Boeing tried to please them.

The 787 delays, plus the new merger between American and US Airways, will mean higher U.S. domestic airfares and rightly so. We’ll fly less often but more happily.

Heather writes so well - perhaps we could invite her to be our guest here some day.

Heather Mallick has a babble ID and used to come here on occasion. She also used to write a column for rabble.ca.

Japan's All Nippon Airways said Monday it was grounding its fleet of Dreamliners until at least the end of May, with no end in sight to woes for Boeing's next generation plane.

The airline is cancelling 1714 flights in April and May, a period that includes Japan's busy Golden Week holidays, taking the total affected to more than 3600 since the Dreamliner was ordered out of the skies in January. 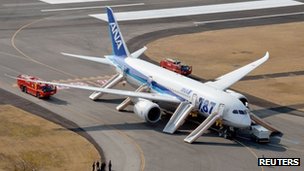 Japan's All Nippon Airways (ANA) has said it will cancel all Boeing 787 flights until at least the end of May, in the latest blow to Boeing.

Quite the contrast in reporting when it is written from a pro-worker's point of view, eh!

The ability to travel these “long legs” is an essential part of the business model for the Dreamliner, but any new airplane must demonstrate a flawless safety record before it gets to fly such a route. Boeing, despite its use of relatively unproven technology in the new jet, appears to have been impatient to get such clearance, according to officials with knowledge of the certification process.

The FAA resisted the requests from Boeing, arguing that the 787 had not accumulated anything like enough hours of operation for them to be able to judge if it was safe to extend its flight range. And now a pending investigation by theNational Transportation Safety Boardsignals a long while before the 787 is able to deliver on that goal.

In fact, the regime that allows these “optimum range” flights has never before faced a problem as serious as the one that has shown up in the 787, aviation experts say. As a result, there is no precedent for how regulators should deal with it.

Behind this new twist in the 787 crisis is a largely unnoticed but huge achievement in aviation safety. Decades ago, the longstanding rule was that a jet should have three or four engines in order to cross an ocean so that, in the event that one failed, it could still safely divert to the nearest runway. Even then, regulators insisted that no airplane should be more than 60 minutes’ flying time from a usable runway—and that means not just any runway, but an airport with 24-hour operations, air-traffic control, emergency and medical services, and no weather restrictions.

By the late 1970s, the economics of airline operations led to a pushback against this safety margin: Twin-engine jets were noticeably more fuel efficient, the risk of engine failure had become remote and, in any case, the latest twinjets were designed to safely get to an airport on the power of just one engine.

Boeing itself was a big driver of the argument for less stringent rules. At first, they met fierce opposition. In 1980, the then-head of the FAA, Lynn Helms, told a Boeing executive, “It’ll be a cold day in hell before I let twins fly long-haul over-water routes.” By 1985, however, the FAA relented and doubled the time allowed for a diversion to 120 minutes under a new regime called ETOPS, short for extended operations.

Boeing’s 767 twinjet was the first to be certified to cross the Atlantic under these rules, and by 1988 the FAA, assured by the reliability demonstrated by the twins, extended the limit again, this time to 180 minutes. However, the appeals from Boeing continued. The company had produced the largest twinjet yet, the 777, and for certain routes over the Pacific they wanted another extension, to 207 minutes, in order to optimize its efficiency. This was granted in 2000.

“It’ll be a cold day in hell before I let twins fly long-haul over-water routes.”

And, indeed, the 777 has had an exemplary safety record—with nearly 1,500 777s delivered, not a single passenger has died in one. Moreover, the 777 gave a somewhat unnerving demonstration of its ability to fly on one engine: In August, 2003, a United Airlines 777 flying nonstop from New Zealand to Los Angeles lost an engine beyond the halfway point and diverted to Kona, on the west coast of Hawaii’s Big Island. Pushing against strong headwinds, it took 192 minutes to reach the runway—a record for ETOPS diversions (and a white-knuckle experience for the passengers).

In 2011, the longest-range versions of the 777 were cleared for yet another upper limit for a diversion time: 330 minutes, or five and a half hours. This meant that, for example, the plane could a fly non-stop route from Sydney, Australia, to Argentina over both the south Pacific and Atlantic. This also enables flights over the North Pole, which greatly speed up the times between continents—but where airports that meet the strict standards for emergency diversions are few and far between.

That was the 777, a conservatively-designed airplane. In contrast, the 787 Dreamliner represents, in one quantum leap, a radical break from the old ways of building a jet—including making it what Boeing called a “more electric jet.” That requires an on-board system to generate enough electricity to power 400 homes and, as a part of that system, the use of a battery technology, lithium-ion, that Boeing had never put into an airplane before.

Even still, Boeing wanted the 787 to be given the new maximum limit of 330 minutes as soon as possible—a jump from the 180 minutes it is now allotted, and a certification that took 16 years and two million ETOPS flights for the 777 to achieve. (In a process separate from that of the airframe itself, the Dreamliner’s engines have already met the 330-minute standard.)

Marc Birtel, a Boeing spokesman, told The Daily Beast in an email: “Our years of experience and deep expertise confirm that, like other technologies, when the appropriate battery, system and airplane protections are in place, lithium-ion batteries deliver significant benefits. There’s nothing we’ve learned in the investigations that would lead us to a different decision. There is no change to our goal for 330 minutes ETOPS for the 787.”

In their argument, Boeing executives could have cited striking evidence that incremental advances in technology—particularly in navigation aids—have made flying safer than it had ever been. By the end of last year, the international accident rate was the lowest since 1945. In the U.S., with 30,000 flights a day, there had been four years without a fatal crash. It seemed that all the most common mechanical causes for crashes had been designed out of the machine.

Seeming to bear this out, as of November last year, All Nippon Airways, the first airline to order Boeing’s 787, had been flying it for a year, carrying almost two million passengers, without serious incident, and were by all accounts delighted with it. And according to a technical briefing provided by Boeing, the lithium-ion batteries had shown no signs of being a serious issue; including airline operations and test flights, they had gone through 1.3 million hours of use.

Then, in one week, came the two battery meltdowns. The first, in Boston, involved a fire while an empty Japan Airlines airplane was parked at the gate. But the second, in Japan, happened in flight and had serious implications for the ETOPS certification – once the pilots of the ANA 787 saw they had an overheating battery they diverted to the nearest runway and were on the ground in just 16 minutes, with passengers evacuating down emergency slides. They were lucky – it was a domestic flight over land.