Stellas has a union:

Quote:
The unionized employees of Stella's Cafe on Sherbrook Street are meeting Sunday to discuss the terms of their newly inked contract which was finalized late last month.

The collective agreement comes nearly a year after a social media campaign called Not My Stella's was launched about workplace treatment at the Winnipeg chain. Shortly after the Instagram account went up in November, dozens of current and former employees posted instances of sexual harassment, discrimination, bullying and abuse from senior staff.

"They'll have a unified voice with their employer so it means they will have the assistance of the union to bring their issues forward to the employer," said Jeff Traeger, the president of UFCW Local 832, the union that represents employees of Stella's on Sherbrook and in Osborne Village.

Stellas has made headlines in recent times for a culture of sexual harassment in the workplace, so it is great that these workers have a union contract. I just hope Stella's doesn't give the staff at its non-unionized outlets a little bit more as a way of undermining the union effort.

Good on the Stella's workers.

Staff striking over lack of respect:

Workers at Stella's on Sherbrook Street are walking a picket line Monday morning.

Members of United Food and Commercial Workers Local 832 held signs as they walked in front of the Winnipeg restaurant Monday morning, their numbers bolstered by non-staff supporters holding flags and signs.

Stella's shows a "complete lack of respect" to its staff, he said.

The union's bargaining committee has been meeting with Stella's management since June to negotiate a deal for workers but has been unsuccessful. 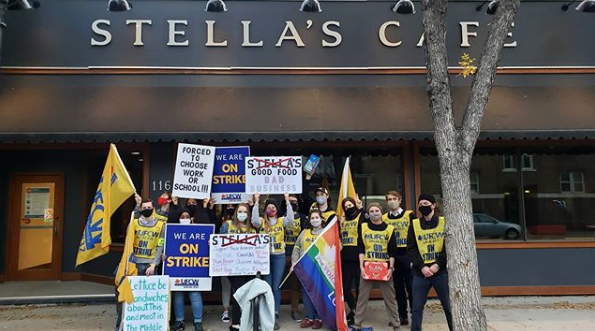