So far, it seems, the collective reaction has been a big sigh of "who cares?" which is certainly refreshing. We have gay politicians, gay news anchors, gay actors, gay CEOs. What's the big deal about a gay basketball player?

So far, it seems, the collective reaction has been a big sigh of "who cares?" which is certainly refreshing. We have gay politicians, gay news anchors, gay actors, gay CEOs. What's the big deal about a gay basketball player?

I didn't set out to be the first openly gay athlete playing in a major American team sport. But since I am, I'm happy to start the conversation. I wish I wasn't the kid in the classroom raising his hand and saying, "I'm different." If I had my way, someone else would have already done this. Nobody has, which is why I'm raising my hand.

its also a contact group oriented sport, its not like swimming or playing chess. The next step is NFL , or NHL, which is even more of a contact sport, Ass grabbing and all that.

to the question, why is this coming-out so different?

... each element militates against disclosure, whereas female stage performer (gasp, gays in showbusiness!), true, who cares

to the question, why is this coming-out so different?

It's a very backward and disgusting country, so I suppose we should be appreciative of small gestures.

Let me know when a professional player (or any other celebrity of any kind whatsoever) in the U.S. calls in the media to announce: "I've converted to Islam!"

It's a very backward and disgusting country, so I suppose we should be appreciative of small gestures.

Let me know when a professional player (or any other celebrity of any kind whatsoever) in the U.S. calls in the media to announce: "I've converted to Islam!"

Maybe that misdirection can be taken up in some other thread and we can leave this one for discussing "issues LGBTQ from an LGBTQ-positive perspective".

I think its significant for a black gay man to come out as the first openly gay NBA player.

Maybe that misdirection can be taken up in some other thread and we can leave this one for discussing "issues LGBTQ from an LGBTQ-positive perspective".

Actually, when Ali crossed my mind I also thougth of this:

That said, I do know this is significant, because it involves the macho bastion of men's team sport, don cherry's freakout about locker rooms, et al. 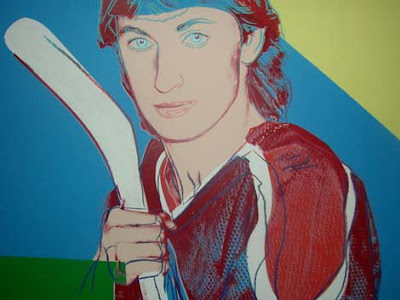 Ever hear of 9/11? I'm obviously not talking about the distant past, before the wholesale demonization of Islam. As I said, let me know when you hear about a public conversion. It's virtually inconceivable.

And ODA, I apologize for what seems like misdirection. But this thread is about the United States and its evil backward attitude toward sexual minorities. I said we should be appreciative of small gestures, and I meant it. But it really is a small gesture, and it doesn't make a significant dent in the homophobic and misogynistic world of male team "sports". That's my estimation - I hope I'm wrong.

The difference with the public conversions is that none of them would be the first Unionist and thus, not considered newsworthy. I think we will see other male sports athletes coming out of the closet very soon to the point that in 3-5 years sexual orientation in sport will be almost meaningless.

Hearing the news made me feel like I’d accidentally walked into a wind tunnel. For as long as I had written about this issue and as many times as I had said in recent years that “this will happen in a matter of months if not weeks,” it still hit me like a triple-shot of espresso cut with a teaspoon of Adderall. Thanks to the courage of 34-year-old NBA veteran Jason Collins, we can no longer repeat endlessly that no active male athlete in North America has ever come out of the closet. Instead we’re now able to say that we were there when our most influential cultural citadel of homophobia—the men's locker room—was forever breached and finally received a rainbow makeover on its unforgiving grey walls.

this thread is about the United States and its evil backward attitude toward sexual minorities.

No, it really isn't.

Just to recall some earlier pioneers:

Sheryl Swoopes announced she was lesbian just after being named MVP for the WNBA in 2005. She was then subjected to the usual U.S. ridicule and frenzy when she became engaged to a man in 2011 - "proof" that sexual orientation is a "lifestyle choice". Here's a really good counterattack by Maya Rupert, Federal Policy Director, National Center for Lesbian Rights.

Then there was Glenn Burke, who came out as gay to his teammates and coaches in the L.A. Dodgers and Oakland A's in the 1970s, and then publicly in 1982. His post-MLB life went from one tragedy to another - drug addiction, homelessness - until he died in 1995 of AIDS complications at the age of 42.

There was always an assumption that the "jocky" type of woman athlete was likely lesbian, so that was never such a shock. That was actually a sterotype that tended to work the other way, while many "tomboy" type women are actually straight, as are many in non-traditional jobs, who also often face that assumption.

It is important also because professional athletes are often admired by kids and teenagers who are at the stage when gay-bashing is rife, as school and on playgrounds.

Crossed benches on this one. Nice to see someone breaking out of the closet in one of the better known incubation chambers for homophobia (and rape culture for that matter, the essential nature of team sports hasn't magically changed overnight) - but isn't this really just another manifestation of infotainment? It has been just over 24 hours and I am already gettng more than a little tired of references to the "bravery" and "courage" of anyone who enjoys the kind of financial insulation from the consequences of their coming out as a professional athlete does (and a contract for $1.35 million per year strikes me as a pretty cozy amount of insulation).

Rather than going on about his "bravery" and "courage", where is the critique of team sports in general and professional team sports in particular that makes them such a hotbed of homophobic and sexist attitudes in the first place? When will the spotlight be turned to the "pack" mentality that all too often goes along with team identification? Where is the accounting of the costs of elite sport - and I don't mean the ticket prices at the arenas and stadiums, but how it negatively impacts thousands and thousands of lives - those who sacrifice educational possibilities in the pursuit of the "dream" of becoming a professional athlete as well as the costs to the educational system itself when often scarce resources are allocated to competitive athletic teams at the expense of accessible fitness opportunites for all students?

In regards to Jason Collins as an individual, I applaud his choice to come out. I applaud anyone who makes the decision. My mixed feelings are entirely directed towards the media and their coverage. It infuriates me that they are so blinded by their own mythology about the virtue of competitive athletics and their fixation with casting all stories in terms of villians and heroes that they will continue to devote column inches and broadcast time to what is essentially a celebrity sideshow.

Yeah, there really does need to be an examination of why, exactly, team sports use so much implicit(and, often explicit)homophobia(and, in men's sports, misogyny as well) in their training regimens...

Why is there this belief that someone can only excel as a team athlete by being made to feel that they constantly have to prove that they fit into a rigid definition of gender roles and sexuality expectations?

Why, in the eyes of so many coaches and other sports hierarchs, is it so important to include massive shaming about gender and sexuality as part of the "teambuilding" process?

Who decided that it wasn't enough simply to try to be good at whatever game you're playing?  Or that you couldn't BE good at the game without being broken down and built up again like a Marine recruit?

And why is it so important to identify team sports not simply as games, but as a kind of war, and a preparation for war?

For God's sakes, Sparta fell milennia ago.  There have to be OTHER models for achievement in team endeavors out there.

“I was schedule[d] to speak at a church in WI, and a member said that the pastor wants to cancel my event, I said ok why?” .

“Then I was told, because I said congrats to Jason Collins on twitter, I said really? we have a contract, he said check the moral [clause].”

Butler noted that the speaking fee had been $8,500, but “I was told if i removed the tweet, and apologize and ask god forgiveness, I can have the event, I said no.”

Yes, Robbie Rogers has officially un-retired and will become the first openly gay male North American athlete to take the field in one of the “big five” sports. Playing alongside superstar and friend Landon Donovan, and coached by former USA men’s national soccer team helmsman Bruce Arena, Rogers’ return is a testament to how much has changed since NBA player Jason Collins came out last month. Rogers saw how much support Collins received and was moved from his previous pessimism that he would never be accepted. His compunction to return was cemented after speaking at an LGBT youth forum to 500 kids.

“I seriously felt like a coward,” he told USA Today. “These kids are standing up for themselves and changing the world, and I’m 25, I have a platform and a voice to be a role model. How much of a coward was I to not step up to the plate?”

When Jason Collins said he was gay in the pages of Sports Illustrated, Martina Navratilova, the tennis legend who came out in 1981 wrote astutely, “I think—and hope—there will be an avalanche. Come out, come out wherever and whoever you are. It is beautiful out here and I guarantee you this: You will never, ever want to go back. You will only wonder why it took so long.”

We haven’t seen an avalanche yet. But just as Collins’s announcement made it easier for Robbie Rogers, this latest news will make it easier for the next person to be honest and public about who they are. It will also make it easier for reluctant teammates to get over themselves and be the kinds of allies every LGBT athlete both needs and deserves. Not an avalanche, but brick-by-brick, we are seeing before our eyes the building of a new paradigm in men’s sports. It will continue to develop until in a not-to-distant future, the issue of having a gay teammate simply won’t be an issue at all.

The next step is NFL

Michael Sam coming out is a much bigger deal than Jason Collins. Collins was at the end of his career. Sam's hasn't even started yet. It took a lot of courage for him to do what he did and I certainly hope it doesn't negatively impact his chances of making it to the NFL.

Michael Sam was drafted yesterday by the St. Louis Rams, making him the first openly gay player to be drafted by an NFL team.