It is one of these things that has been going on for a while now without the public really being aware. While the idea is sound in terms of "opening this technology with new possibilities," you should be fundamentally aware that this resource is a public one, and has been sold in auction by government to encourage rural connections? It raised 12 Billion dollars.

How does this help your pocket book? It doesn't. It provides for more possibilities for the White space Coalition to advertise their wares.

So now that you have that information consider this. Open source was an initiative for software development that was open to the idea of communities.

[img]http://images.amazon.com/images/P/0596001088.01._SCMZZZZZZZ_.jpg[/img]This was the battle between Microsoft and Netscape under the title of the Cathedral and the Bizarre by Eric Raymond now in book form. It wasn't so sometime ago when I read of this history under a Macopinion.com link.

I think as a citizen of this country it would be a progressive move in face of the FCC in the United States, that the White Space that will connect communities should be a free one in terms of the internet. No where does Larry Page reveal this, and no where does Microsoft who is coming on board, reveal this as well?

So here's the idea.

Open source is a software application. What I am proposing is a "open source hardware application" that allows you to connect to the internet for free. If you can access it, then why should you pay for it? Did you ever pay for the signal when you were using your Rabbit ears? Charged for the utility of the phones in your home that are cord free?

I would like any comments here to this idea opened up for discussion while you become informed as to what has happened while we were sleeping.

I was asked if this was a anti-corporate response in relaton to the control of the internet by providers? It's an important question, and one that deserves a proper response. 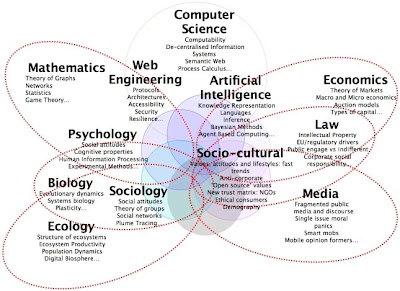 In 2006, I helped to set up the Web Science Research Initiative (WSRI) to facilitate and produce the fundamental scientific advances necessary to inform the future design and use of the World Wide Web. We are now working with a growing number of colleagues around the world to develop the academic infrastructure for this new field - including journals, conferences, and curricula - so that the future Web supports the basic social values of trustworthiness, privacy, and respect for social boundaries that are so critical for connecting people.

But once again, this has not been all that is needed. When you think about how the Web is today and dream about how it might be, you must, as always, consider both technology and people. Future technology should be smarter and more powerful, of course. [b]But you cannot ethically turn your attention to developing it without also listening to those people who don't use the Web at all, or who could use it if only it were different in some way. (I have read that 80% of the world do not have access to the Web. ) The Web has been largely designed by the developed world for the developed world. But it must be much more inclusive in order to be of greater value to us all.[/i]

So it's about the future.  That if one recognized something that was there for people "before it becomes technologically changed to benefit corporate coffers, then it is equally important to stress the connectivity to the rest of the world, and the knowledge that this medium shall bring.

Right now becuase it had  gone to auction in both countries Us and Canada, it has been sold, does not mean that becuase government sought to increase it's own coffers, that it shall deny that it has interrrupted a resource that belongs to the people and now is being monopolized by big busness.

Future developement shall not see that part of the society in which this operates shall be denied access to information at a cost that exceeds most people budgets. Is discrimminatory to those who have less, and are isolated in their communties away from the larger centers. Rabbit ears and radio programs connected people to the larger events happening in the world.

So your saying that we should pay for this connectivity?

Radio waves generally are utilized by antennas of appropriate size (according to the principle of resonance), with wavelengths ranging from hundreds of meters to about one millimeter. They are used for transmission of data, via modulation. Television, mobile phones, MRI, wireless networking and amateur radio all use radio waves.

Radio waves can be made to carry information by varying a
combination of the amplitude, frequency and phase of the wave within a
frequency band and the use of the radio spectrum is regulated by many governments through frequency allocation. When EM radiation impinges upon a conductor, it couples to the conductor, travels along it, and induces an electric current on the surface of that conductor by exciting the electrons of the conducting material. This effect (the skin effect) is used in antennas. EM
radiation may also cause certain molecules to absorb energy and thus to
heat up, thus causing thermal effects and sometimes burns; this is
exploited in microwave ovens.

Please take note of the "link colours" becuase current is not distinquishable from writing other then to highlight underline.