Supporter  of the restoration of passenger rail services between Michigan and Ontario were presently surprised lately.

In the Amtrak 2020 General and Legislative Report there is a line item titled, Restoration of the Detroit–Toronto Service" on page 7. The amount of money needed is "to be determined."

The idea of of having trains connecting from Chicago, through Detroit/Windsor can become reality.

There are significant hurdles to go through to make this happen:

The Detroit/Windsor Railway Tunnel (known historically as the Michigan Central tunnel) is majority owned by Borealis Infrastructure, the infrastructure investment advisory and management arm of OMERS, the Canadian-based pension plan for Ontario’s municipal employees. CP Rail uses the tunnel and maintains a 16% ownership in it. Support from Borealis would be also a critical factor in making the restoration of Detroit/Windsor Passenger rail service a reality.

On a positive note, the historic Detroit Michigan Central Station is now owned by the Ford family.

Here is a timetable of the Niagara Rainbow. 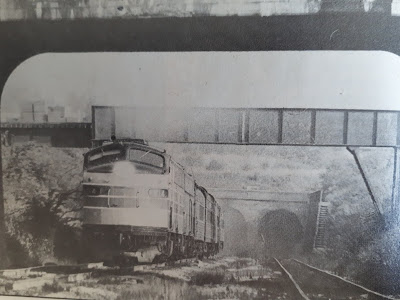 The Amtrak Niagara Rainbow which ran between Detroit - via Ontario - Buffalo - New York ceased service in 1979. 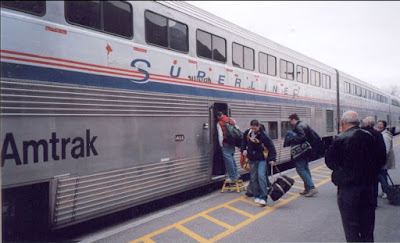 Let us hope in the future we see the return of passenger trains through Detroit and Windsor!

Train is very sensible: it is better environmentally and economically. Practically with the increased time needed for air travel and increased possibility of greater track speeds, train is not a much longer proposition for short distances such as this.

Sweden even wants to bring back night trains (from the Nordic countries to western and central Europe). Trains make sense. Nowadays they can have internet service and business travellers can work comfortably on the journey. That one can continue west to Chicago and east to Québec and beyond.

Joe Biden is now having problems for being too touchy-feely and perhaps borderline creepy, but he was right about the Northern New England line between Montréal and Boston.

What helps in Europe is the Schengen Treaty where borders have become invisible and there are no checks at all when crossing national borders.   Once you've entered one Schengen Treaty country, you can enter them all.   Last fall I crossed the French/Belgian border at 300 KPH aboard the Thalys train.

That's for sure. They don't wake you up any more on night trains any more either.

..in 2008 i took a train from marseille to alicante. at the spanish border crossing they changed the train engine and a border guard walked through the train asking to see passports. the french engine was fast..so much so that it was hard to look out the window. it disturbed my equilibrium. the spanish one was normal.

..about a year earlier i drove from holland to spain in a volkswagen van. crossing into spain there were no checks. so i was surprised by the train check.

Crossing from Switzerland to Italy  on the train the border guards or police appeared to do spot checks I was asked for ID but I think it was more the border guard wanting to get a good look at my nephew’s attractive wife, with whom I was travelling with at the time My experiences travelling by rail have been good and have fond memories of the dome car on my first trip across Canada

I do remember being rudely awakened by an Italian immigration agent, and him wanting me to translate for others as he spoke only Italian. This was a long time ago, though.

Schengen's supposed to eliminate border checks, but there are exceptions (like during states of emergency) that allow countries to reimpose checks when they feel like it. Some countries do it more than others. When I got off a Paris-Geneva train, I walked right out of the station, but when taking a bus across the same border, an agent got on, eyeballed the passengers, then waved us through. I was pretty sure he was checking for non-white people.

As far as Amtrak goes, border control speed for trains just isn't as high a priority for governments as speed at airports and land crossings, unfortunately. The last time I took Amtrak to Plattsburgh, there were two agents to clear the whole train, so it took an hour and a half. When it's full, a 6-car Amtrak train can hold around 500 passengers. A land crossing dealing with that kind of volume would have 10 lanes open.

The way Amtrak and Via have traditionally figured it, that'd mean taking routes with existing ridership, like Detroit-Chicago and Windsor-Toronto, and adding huge delays for the passengers who aren't crossing the border. That's why they axed the Chicago-Sarnia-Toronto train back in 2004. They've been talking about adding preclearance on the Montréal-NYC line for ages, but it seems to be perpetually on the back burner.

Interesting.   I also crossed the Spanish/French border in 2008 and French passport police got on the train to check passports.   I was told that this was a "rare" thing.     Any other time I've crossed borders by train in Europe it's been at high speed :)

Although not in the EU, Iceland is part of the Schengen Agreement.   They have been taking advantage of it for cheap flights between North America and Europe that make a pit stop at Keflavik Airport.

OTOH, I once took a flight from Italy to the UK which is not part of the Schengen Agreement.   They do have border checks there.   The funny thing was that as a non-EU citizen the lineup for me when I got off the plane was actually much shorter than the line for EU citizens.

I remember regularly driving to the US and back without so much as showing ID at the border. No passport required.

Growing up in Sarnia, crossing an international border was a regular occurrance.  I remember the drill:

Customs:  where you from?

Customs:  where are you headed?

Dad:  to Port Huron to do a little shopping.

Customs:  anything to declare?

Customs:  have a good trip.

Windsor to Quebec City is just under 1,200 km. The technology is available but instead of fast trains in that corridor the national interest is pipelines through unceded territories.

Windsor-Quebec City hi speed (300km/hr) I can see happening, in a dream but not in reality. Somewhere in Michigan Illinois Indiana connected with hi speed, I seriously doubt it. More like a science fiction fantasy opposed to reality.

Everyone here is familiar with the Europeans system, I’ve rode on the largest, in China. I’ve heard good things about the Japanese. India will have it’s first line open in 2022 connecting Mumbai and Ahmedabad. But I suspect Sout Korea will connect their hi speed system with a new one built in North Korea before Canada ever gets a 200km/hr + train, let alone the US or even ever connecting the two together!

But I suspect Sout Korea will connect their hi speed system with a new one built in North Korea before Canada ever gets a 200km/hr + train, let alone the US or even ever connecting the two together!

The $4.5 billion that JT blew on the leaky oil pipeline would have covered the cost of the first 80 KM of high speed rail line between Edmonton and Calgary (total distance about 300 KM).

It is ridiculous that there is no high-speed train between those cities. But then, the southern line across the Prairies was also scuttled.

I liked the turbo train but it did sometimes break down.