please and thanks, this is a polling thread

Sorry, I accidently put Ford's buying votes in the wrong thread in post 551. However, looking at it a different way, it could have a significant impact on the polls.

Mainstreet will be out with another poll Friday.

Everyone wants to be a pollster it seems.

Abacus will be out with a poll on Sunday!

What percent of the vote will the NDP need to win a majority? Anybody know?

Forum will be out with a poll tomorrow.

With 2 weeks to go until voting day, the NDP has now come first in the three most recent polling results.

Is Doug Ford working for the NDP? It is the only rational conclusion.

FWIW, Kinsella has posted the unverified Ekos numbers. NDP nearly 41%, 10 points up on the PCs, and Libs looking at a complete wipe-out at 18.9%.

The Post Millennial has been provided a series of polls from three firms.

All three highlight the following:

A massive increase in support for the NDP largely at the cost of the PCs.

While the first poll(EKOS) is public and posted below the other two are not, but will be released within the next two days.

We are confident that all three firms including Forum research, and Mainstreet will show the projection largely in line with EKOS.

May be peaking too soon.

Yea you're right josh, the Liberals with 3 seats may be overestimated right now.

I think that Josh is concerned that the NDP has peaked too soon which can cause an NDP fear. The NDP were leading federally in the last election through most of the election and ended up in a distant third place finish.  The same thing could happen here .

Well, the election is only 2 weeks from today, and a 10 point lead, with all the momentum and both opponents facing huge problems, a collapse is possible, but not likely. Horwath's campaign has been running very smoothly, and getting plenty of good press. While the margin could be cut below 10%, it's hard to see how the NDP could fall out of first place in the next 2 weeks.

Regarding the 2015 federal election, the NDP did indeed have a nearly 10 point lead in the polls, on August 24 (although some of the polls included in that day's average were questionable). From there they fell quickly and by September 1 there was a near 3-way tie. That continued until September 23, when the NDP began their terminal decline. The Cons and Libs continued to battle closely until October 8, when the Libs began pulling away. By 2 weeks before the election, the NDP was already in an unrecoverable third place. The details can be seen here. It is a little hobby project I did after the election. I explained what it does in this thread.

Maybe, as you have pointed out repeatedly polls cannot be taken at face value. They can only predict based on past behavior.

For example, typically millennials don't vote as much as boomers which has benefited the Conservatives. However, for the first time ever, millennials outnumber boomers. If millennials are inspired to vote in greater numbers they can upset the polling predictions.

Polls are just one tool not everything.

My apologies to NR for raiding his polling threat.

I will try to apply the napoleonic wars for the struggles of the NDP coalition vs imperial Liberals .

The great lose at the Battle of Wynne in 2014, the Liberal generals and support staff were known as tip top experts in there arts of strategy.  In 2014 General Wynne a little known pesronality was appointed to lead the imperial forces.  As the battle formations were formed the imperial general staff the found a curious thing.  The left of coalition forces formation was understrength.  Acutally the coalition formation under General Howarth followed the advice of her general staff which was best known for tendency of careerism that should have been retired long ago.  Immediately Wynne started by ordering a general attack across the formation.  Followed by sending in her reserve elite imperial guardmen cavalry into the weakened left of the coalition forces.  The left collasped in less than an hour and imperial cavalry was threatening to encircle the coalition position.  Wynne's general attack on the centre and the right had been effective in pinning down any help for those positions.  Seeing a disaster in the making Horwath sent the order for general retreat.  The retreat was choatic but some order was achieved preventing rout and saving most the army from capture.  Howarth was allowed retain her position.  But as history will show that Horwath will trumiph in 2018 and her Waterloo.  But is not the end of the story as coalition forces were fall into total defeat under General Muclair 2015.  But that is another day as i need sleep.

Forum won’t knock anybody’s anything off.  A 15 point NDP lead, if that’s what it is, is just as ridiculous as their 16 point Conservative lead in the federal race.

According to the Forum poll, the NDP are now leading in every region of the province and in every age group except the 65+.

You can expect every attack in the Sunday televised debate to be directed at Horwath. It's the last major chance the Liberals and PCs have to do damage to the NDP if these numbers are anywhere near accurate and other polls are in the same ballpark. What comes after the debate will be MSM "full examination" of Andrea and the NDP but this is likely to meet with limited success if Horwath does reasonably well in the debate. Overcoming the momentum of the NDP and such a large lead would be very difficult, without a grand faux pas by Horwath, and she has been remarkably good and steady throughout the campaign.

Seat projections for the Liberals is at 1. One. A single seat.

We will post some updated numbers with a full sample later today .The numbers are much tighter than the single day results which we didn't plan to release.

But take every poll from every pollster with a grain of salt as none of them have a handle on the truth.

NDP ‘gaining momentum,’ surges ahead of Tories in latest poll

Early into fielding of #ONPulse Flash Ontario Poll: We are NOT seeing NDP surge like Forum. Similar numbers so far as last week

This is an interesting example of political communication.

Its official, I'm going to predict the first .@OntarioGreens win come June 7th, @MikeSchreiner will be the new MPP for Guelph

Ok there is something really weird with the numbers from @ForumPoll . It seems the raw, unweighted results are 40% PC and 36% NDP. But once weighted this becomes 33 to 47% Those are crazy weights!

Hey @ForumPoll am I reading this right? In your sample, there were 342 respondents for the Conservatives and 307 for the NDP? Is that pre-weighted raw counts?

Ok there is something really weird with the numbers from @ForumPoll . It seems the raw, unweighted results are 40% PC and 36% NDP. But once weighted this becomes 33 to 47% Those are crazy weights!

Hey @ForumPoll am I reading this right? In your sample, there were 342 respondents for the Conservatives and 307 for the NDP? Is that pre-weighted raw counts?

Idealy the poll would capture 10 of each category but it didn't so the results have to be calibrated. The weight of the 5 people between 20 and 40 has to be doubled. The votes of people 40 to 60 have to be reduced in value by a third.

Of course it is much more complicated than that. Results are sifted by lots of different criteria to arrive at a prediction. The method of polling factors in too.

Another prognosticator but whatever.....

What a week can do during a campaign! The possible outcomes on May 20th and today...

What could polls be missing?

Abacus is supposed to be coming out with a poll within the hour based on Friday and Saturday’s polling,  just before the debate starts

Abacus previous poll on May 18 showed

Also don’t count the PCs out. Smaller pool, but still room to grow. I don’t think the “dismayed” number is high enough yet to really worry the PCs but it’s something to watch. #onpoli 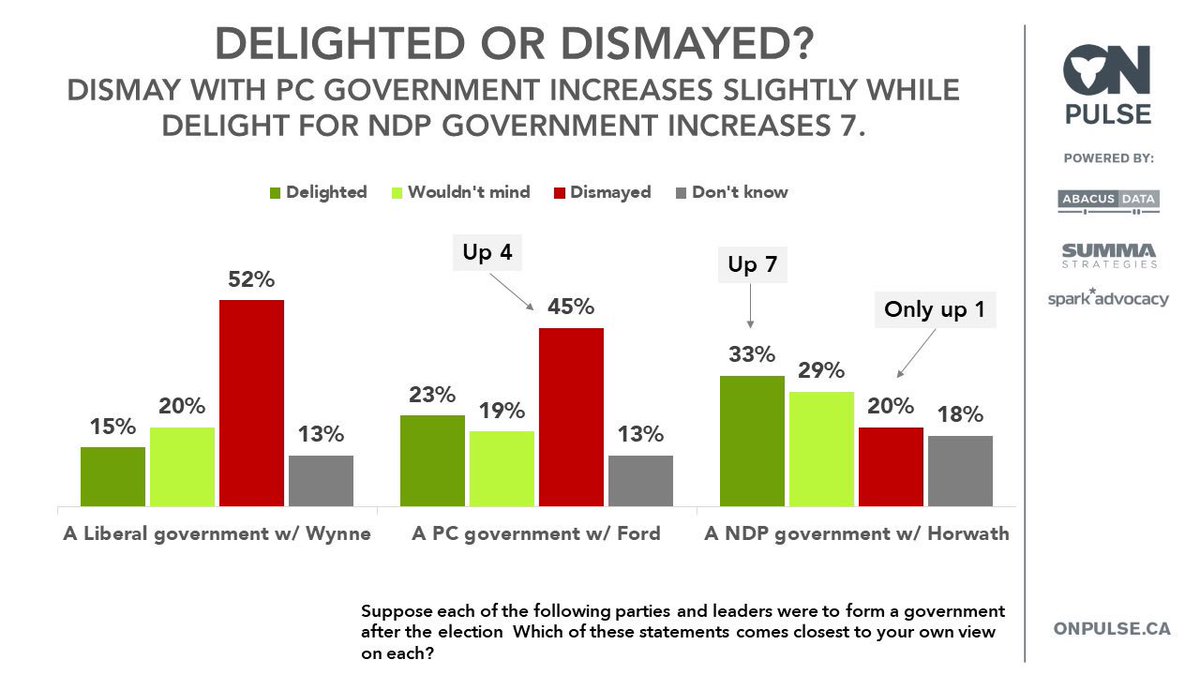 The NDP has a chance for a solid majority so they will be able to enact their policies which would be a refreshing change.

2 in 3 Ontarians are open to voting NDP. That’s a remarkably high pool of potential voters. Will be interesting to track after tonight’s debate. #ONpoli 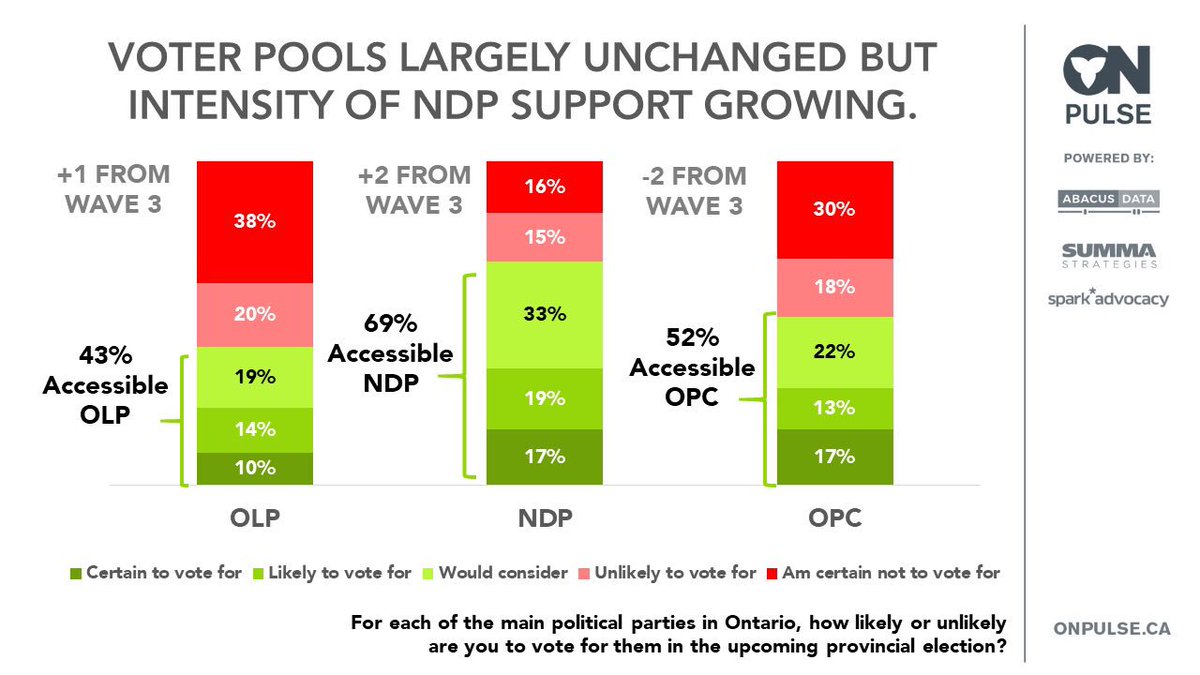 6 of the last 7 polls show the NDP in the lead so now, without going down to his level, they need to seriously ridicule the Doug Ford's clown act.