Watch this video. It is excellent as a local resident asks Metrolinx why we do not have all day two way GO Rail service. The answer shows you just how difficult it is to deal with CN.

In 2015 the IBI group released the Missing Link Report, that suggested combining CP and CN freight lines in a certain area in Ontario to free up space for more GO passenger trains. A good analysis of that report was done by Andrew Johnson in 2015.

Fast forward to now and the problems associated with bringing CP and CN rail together seem to be leaning toward a CN freight bypass corridor only. This is good news still for people in Kitchener,Guelph, Waterloo but not for those who were fighting for GO train service into Cambridge. 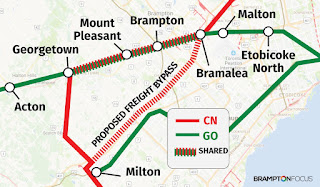 Here is a link to the last update from Metrolinx on the topic. As mentioned in the update Metrolinx would:

Continue working with CN and Hydro One on further developing the previously announced a 30 kilometre freight bypass as one option for separation of freight and passenger service. This would mean up to 35 new bridges, relocating 17 hydro towers and constructing new track all along the 30 kilometre route.

It is not known how much money it will take to complete this CN Freight Bypass project (the original Missing Link Report which included CP also was $5 billion). It will be less than the original report but who will fund this critical infrastructure project?

The future of passenger rail improvements along the  Canada’s Innovation Super Corridor (formerly known as the North Main Rail line) depends on it.