Go Patrick Go! You can't keep a good leader down, it seems.

Ontario PC party was not left in a mess, writes Patrick Brown

So Patrick Brown was a good leader. Even better than Horwath?

Rebel Media/PC candidate: I’m all okay with discrimination in hiring!

Liberal pundit: Liberals must focus on stopping Horwath, even if that means letting Ford destroy health care. In a minority, Ford will dangle a carrot and the Liberal rump will make him Premier. Anything less than a Horwath majority means we get Ford.

Andrea Horwath seems to know what the voters want

THE RISE OF THE FAR RIGHT

And why they don’t want you to know about it

What's this about Ford following a woman home on 2 occasions which came at the Liberal presser today?

And she wants to in government. Sheesh!

Horwath has their attention. Now what does she need to do to close the deal?

Even if the PCs send Doug Ford to Vegas for the rest of the campaign, not sure the PCs would have the same results as the NDP did with Ruth Ellen Brosseau.

According to presser/affidavit: Doug Ford was lurking around corners in his big, black SUV, following the rival candidate home etc. Extremely creepy/inappropriate. Candidate calls it intimidation.

The controversies keep piling up for Doug Ford and the PCs

The truth about Ford is ouzin out

i found it odd the elections Ontario would choose amber as their color? Very close to the ONDP orange in my opinion.

A lot of voters have to be imagining Ford as premier, and at least some have to be wondering what kind of low-rent soap opera they would be signing up for

It does seem that a Doug Ford premiership would likely be a never-ending low-rent soap opera, although it would not be as bad as the nightmare Trump is creating worldwide. Doug Ford's similarities with the very unpopular Trump seems to also be working against the PC's. It seems to me that right of centre parties in North America and Western Europe have faired poorly in elections since Trump became president.

JKR wrote:
It does seem that a Doug Ford premiership would likely be a never-ending low-rent soap opera, although it would not be as bad as the nightmare Trump is creating worldwide.

I don't think this will be the end of Doug Ford. I haven't looked up a source but I do recall that he is prior to being premier of Ontario and after that the prime minister of Canada.

I think that he'll be like a haemorrhoid that won't go away.

Here is an article regarding Prime Minister Doug Ford

Give you three guesses.  Starts with an I and ends with an L.

As much as many here dislike strategic voting it is also a factor.

Now the concentrations of support may reflect  less strategic voting against the Liberals given how they seem out of it (likely there was not all that much to begin with) and strategic voting going towards the NDP against the PCs. What this means is that these numbers could show that Liberal support even at a low point may be a little more concentrated than anticipated and so might the NDP getting a little push in bad Liberal ridings from Liberals hoping to stop Ford.

This could mean that the Liberals retain a few more seats than these numbers might suggest and the NDP take a few more from the Conservatives.

There is also the strong possibility that the distribution of Ford's vote might not mirror the previous PC leader and that he might do a bit better in some of the 905 seats and lower in others. Depending on how that works out Ford could either get more seats or fewer as these universal seat projections prove incorrect and the distribution not be universal but more grouped.

The same could be true in other ridings between the NDP and Liberals. The universal changes suggest Ottawa Centre going NDP and the NDP support increases not being productive elsewhere in Eastern Ontario. However, if the NDP rise is more to their better seats, Ottawa Vanier (a long shot with a flat increase) could also go to the NDP as an example. Elsewhere, there are other weird things you see with the universal regional switches like the Liberals holding Beaches, Spadina, University, Thunder Bay-A, Etobicoke N, Scarborough C, Cambridge, Elgin, Lambton, Mushkegowuk which I think would more likely go NDP with this kind of movement in their favour.

Good post Sean. A lot of people who are normally disgruntled with the NDP for not being "left" enough are going with that Party. Naomi Klein and those in her cohort are backing Horwath quite persistently. In terms of GOTV, this is excellent news for Horwath.

If you are on the left or the right, you don't get numbers north of 40% unless the hardcore vote comes out for you. I used to say this only applied to the right, as it was a little easier to detect the phenomenon. To be as charitable as possible, I suppose we could define "hardcore" as not being willing to compromise on views.

The PCs were third in both the 1987 and 1990 elections. They were both exceptional elections with very large seat majorities for the winner as per distortions due to FPTP.

Because of the 407 thing (which a huge number of normally Tory supporters drive on), and the continuing litany of corruption in the PC Party, you have two major angry right wing forces which are going to sit this one out. The National Post seems to be revelling in its own disclosures of PCPO misdemeanours, and it seems likely that Horwath has already spoken to Don Drummond or someone like that, so she has been given the yellow light by the business community. So the ideological libertarian free enterprise right is quite happy to hang Ford out to dry on the ground of basic problems of lack of education. The only ones left are the Trumpites. This is the Reform core, and it is only 25% at best in Ontario.

Valerie Plante winning in Montreal may be a significant indicator of Horwath's fortunes in 2 weeks. You will see packed polling stations, and half of the people will be young parents with little kids or people in that cohort. People who are as old as us will be few and far between, and older, quite scarce. Wynne was able to capitalize on this a bit. But as we see, this cohort is not too forgiving.

It is quite plausible we could have an NDP government with a Liberal opposition. 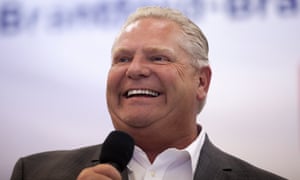 A recent episode perfectly captures the appeal of Ontario Tory leader Doug Ford. Asked about a delayed mining plan in the province’s north, this is how he answered: “If I have to hop on a bulldozer myself, we’re going to start building roads..it will benefit local people but it is also going to benefit everyone in Ontario.” The statement quickly went viral.

In a single gesture, witness the dizzying acrobatics of right-wing populism. There’s the posture of an unflinching maverick, spitting on his hands and getting the job done. There’s the plain-spoken concern for the common man and woman. And then there’s the actual result: a resource scheme that would enrich multinational corporations – who’d help themselves to a 10-year tax holiday – while trampling Indigenous rights and razing one of the last intact wild areas in Canada.

The spectacle has nevertheless dazzled most of the media. The result has been the frequent amplification of Doug Ford’s claim to be an outsider, in alliance with the “little guy,” crusading against the elite – the ones he says“drink champagne with their pinkies in the air.”

Never mind that he inherited a multi-million dollar business from his father, a conservative politician. Never mind that he has coasted on the political machinery of his brother, former Toronto Mayor Rob Ford. Never mind that he spent years as a city counsellor trying to dismantle public services, has surrounded himself with Stephen Harper’s closest advisors, and is now advancing policies that would be a Trump-like giveaway to the wealthiest. Half-baked denunciations of the elite are apparently enough to eclipse an entire career of fealty to them.

The clucking by the pundit and political class about Ford “being unfit for office” has only fed his image as an anti-elite populist. Lying, griping about rigged elections, lurching through gross lapses of knowledge: each time Ford has acted out, the shrieks have grown louder. But his swaggering defiance of the conventions of the political establishment – of civility, proper procedure, and credentialed authority – isn’t mere buffoonery. Getting attacked for it confirms – just as did for Donald Trump – his supposedly down-to-earth, rebellious status.

In case the pundits missed it: this is a pissed-off political moment. People want to vote for rebels – and care less and less how politicians are supposed to talk and behave.

They have good reason to be pissed. Over 15 years of Liberal rule in Ontario, corporate profits have hit record highs while the majority’s standard of living has bottomed out. Energy bills thanks to Hydro privatization are higher, hospital waits are longer, public transit is over-crowded, wages have stagnated, and many struggle to make rent, never mind the distant prospect of owning a home. Ontario has the lowest government spending of any province: this is something Premier Wynne dared to boast about. The Liberals have gone through some death-bed conversions, raising the minimum wage in the face of pressure from social movements like the Fight for $15 and Fairness. But it’s too little to alter the slide into deepening economic and racial inequality, or the perception of an aloof, indifferent government.

“If Ford comes to power he will be operating in a context where he has the blessing of global capitalism to carry out attacks on the poor in a way Mike Harris never had,” says OCAP organizer John Clarke.

That's a PC  party site, in case you didn't know.

Regardless, this was a giant mistake by Wynne - what was she thinking!

Minutes ago, Tasleem Riaz, running for the #ONDP in Scarborough—Agincourt, released this statement about the Hitler-meme found on her FB page;. #onpoli

Doug Ford is part of the worldwide anti-environment movement

What Doug Ford claims to have helped deliver at Toronto City Hall is unambiguously, emphatically not what Rob Ford promised on the campaign trail