If Brown does win the leadership, would he resign immediately as an M.P.?

The way things are going for the Harperites, Brown might be the first of a second wave of Conservative M.P.s who decide not to stick around for this fall!

Well that confirms it - Wayne Gretsky is the greatest, hockey player that is.

So the PCs have a new leader - what do you think?

Brown wins. Talking up the North, Francophones, and Unions. I was wrong! I thought Christine Elliott would win.

Well, Patrick Brown won, which is disappointing.  I feel it's better when reasonable people become the leaders in any political party, and certainly Elliott seemed closer to being reasonable than Brown.

Well, Patrick Brown won, which is disappointing.  I feel it's better when reasonable people become the leaders in any political party, and certainly Elliott seemed closer to being reasonable than Brown.

I remember when some on the left rejoiced when Mile Haaris won the leadership. It was assumed that hS was too ridiculous to win the election. That said I don't think Brown has the same Everyman appeal. He seems too much the unblinking Ayn Rand geek to have wide appeal. But Harris taught me never to say never.

How many different languages did he use in his victory speech?

Underestimating Brown would be a big mistake.

We may not like him but he knows what he is doing, and he is backed by Paul Godfrey who now controls most of the newspapers across the country.

Do you think Barrie will get an NHL franchise now, because after all, they couldn't do worse than the Leafs.

And Bobby Orr was the greatest hockey player.

So there will now be another vacant seat in the House of Commons, although obviously Harper won't hold a by-election before October.

Barrie has now been divided into 2 Federal seats, and the one where Brown was running is likely to still go Conservative based on the numbers, but it creates an opening while the Cons find a new candidate.

Brown wins. Talking up the North, Francophones, and Unions. I was wrong! I thought Christine Elliott would win.

Looks like Brown is at least *appearing* to reach out to groups in Ontario that were alienated under previous PC leaders.

Brown presumably is trying to reach out to union voters that were driven away by Hudak last year, and reach out to Francophones who have been voting Liberal in large numbers ever since Mike Harris tried to shut down the Montfort Hospital in Ottawa.  That is why the ridings in Ontario with large Francophone populations (eg. Glengarry-Prescott-Russell, Ottawa-Orléans etc) still vote Liberal provincially even though the Federal Liberals lost them (except Ottawa-Vanier).

Riding by Riding results have been released by the Ontario PC's.

Looks like Elliot lost the large majority of ridings: 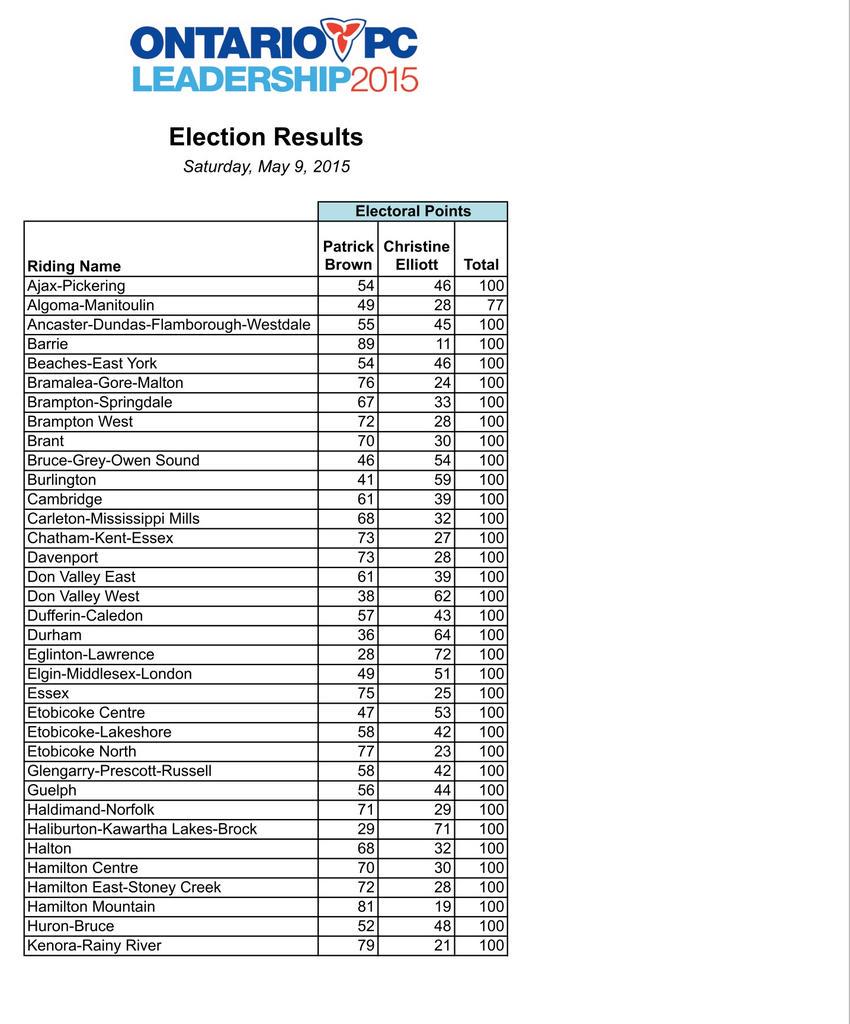 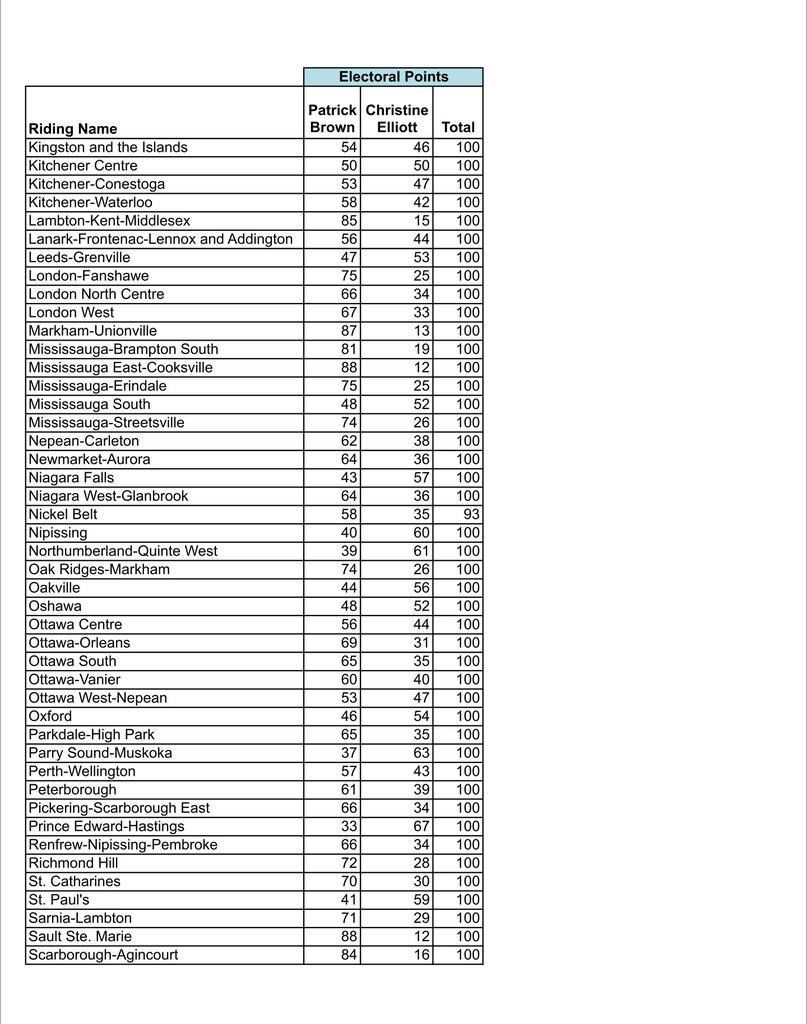 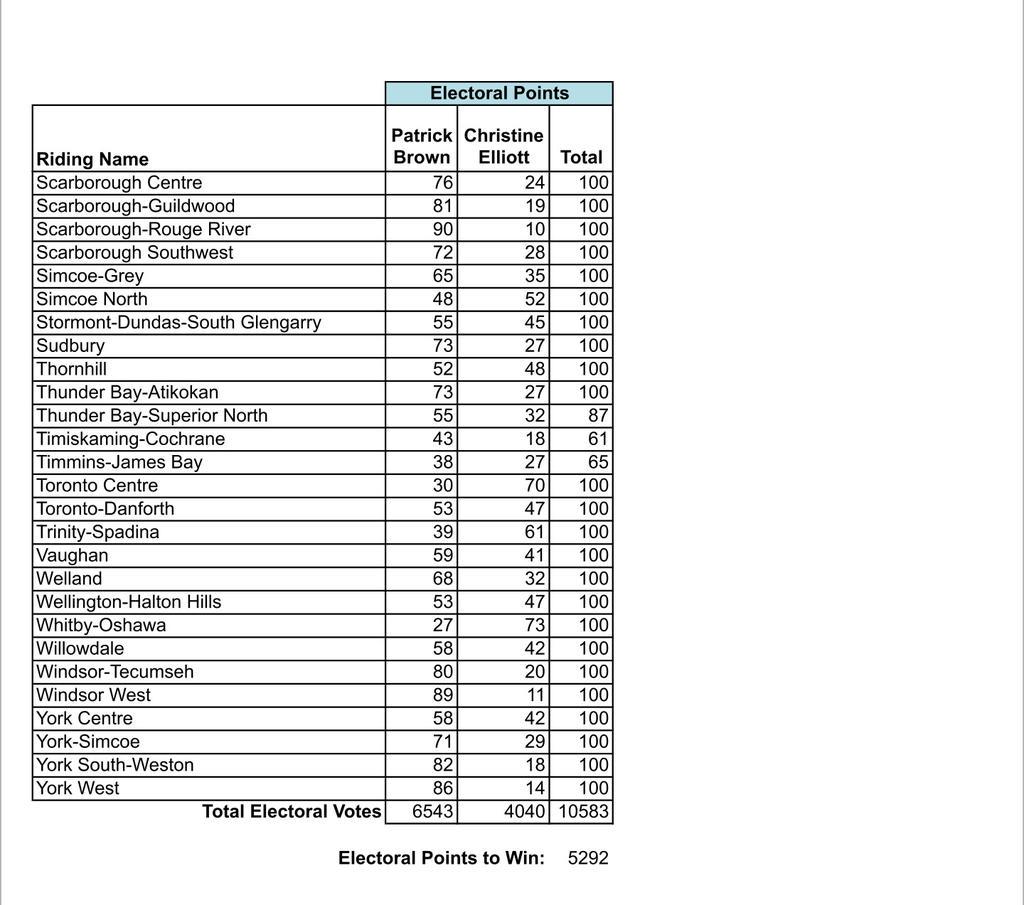 Is Patrick Brown as socially conservative as he appears