Here's to the French

Here's to the French

Some of my favourite film stars have been French as well.

The french can celebrate everything, from blues to food, it`s something, a je ne sais quois, that I miss in English Canada. Although I am an english Quebecer, and have moved out of province, I shall always defend Quebec as a french nation, including separation if need be.

P.S. Sorry to have politicized this thread.

Since higher education is funded by the state, the fees are very low; the tuition varies from 150€ to 700€ depending on the university and the different levels of education. (licence, master, doctorate). One can therefore get a Master's degree (in 5 years) for about 750-3,500€. Additionally, students from low-income families can apply for scholarships, paying nominal sums for tuition or textbooks, and can receive a monthly stipend of up to 450€/month

A master's degree, in France, for anywhere from $900 to $4500 Canadian dollars. Worked with a few young people with telecom and electrical degrees from Spain and France. Top notch.

Here's to the French, too.

Quote:
The cost of the French child care is not cheap. However, in France, child care costs are considered to be a social responsibility and are publicly funded, while in the U.S., parents themselves pay for these services. As Clawson and Gerstel remind us, not caring for our children is in the long term, and probably even in the short term, even more expensive.

I wish I could find that 22 Minutes episode where Cathy Jones and Mark Jackson trade English and French catchphrases as if a ping pong match. Highlarryous.

Here is the recipe for ratatouille I use. It's great. For those who think ratatouille is just some sort of icky sludgy stew, try this on for size and be prepared to love summer vegetbales more than you ever thought possible.

Quote:
Banish all thoughts of ratatouille as a sludgy mess of vegetables – a pretty miserable fate for lovely veg. It may seem a bit OTT to use four pans, but the results are worth it, as the flavour of each vegetable is distinct. That way, the combination can really shine. Serves four to six.

Put a pan over a medium heat, add a splash of olive oil and begin to fry the aubergines (these take longer than the rest of the vegetables, so start them off first).

Put three more small pans over medium heat and cover the base of each with a little olive oil, then put the courgettes, tomatoes and onions into their own pans.

Cook the courgettes until tender, then turn up the heat a little to brown them lightly. The tomatoes should be wrinkled and sweet, but just about holding their shape. And the onions should be soft, sweet and slightly caramelised. The aubergine, when finished, should be very soft and tender, almost creamy.

Season the vegetables towards the end of cooking, then remove each from the heat. When the vegetables are done, toss them gently together in a large pan and heat through for a few minutes with the garlic, then add the torn basil leaves.

Heat a grill or griddle pan, brush bread with oil and toast lightly on both sides. Spoon the ratatouille over the bruschetta and serve.

"For those who think ratatouille is just some sort of icky sludgy stew..." I've never heard that all. It was a great movie, too. 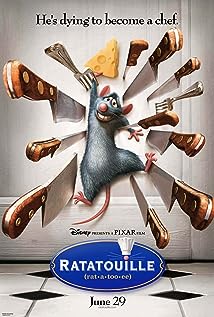 Ratatouille is a favourite of ours - here's how we do it:

Put half a cup of olive oil in a dutch oven on the stove and heat.  Cut two large onions into wedges, toss them in.  Crush and peel several cloves of garlic (to taste).  Add a tablespoon of herb de provence.  Saute.  Add a cubed eggplant, two cubed zucchini, a diced orange bell pepper and a diced yellow bell pepper.  Saute.  Add either 4-6 chopped tomatoes or a large can of diced tomato with juice.  Cook 5 minutes, stir, then put in 425 degree F oven for 30 - 40 minutes, giving it a stir once or twice.  Serve with baguette and a glass of wine.

I just throw whatever veggies I have into a wok with olive oil, some spices, heat it up, and serve it as "Ratatouille". No one ever seems to know the difference.

- wine consumption has fallen drastically over recent decades, from almost half a litre per person/day to a third of that now. Most French adults do not regularly drink wine, and the days of every working man having a litre of red throughout the day is over.

- French cafes are closing at an accelerating rate, owing to competition from fast food, a faster pace of life, decline in wine and coffee consumption, and real estate prices. Many small villages now have a municipal subsidy to keep the last cafe open.

- You can now do a complete degree in French higher education without speaking any French.

- The Communist Party (PCF) was the most solid and broadly rooted institution in France, other than the Catholic church, following WWII. Today, it is basically nothing.

- The French birth rate bounced upwards in recent decades, from about 1.65 children per woman to roughly 2.0, or the highest in the EU and close to the US rate. Total French population is growing, and will likely bounce from 61 million to close to 75 million in coming decades, perhaps passing a declining Germany.

- French cinema remains the only commercially formidable one in major European countries, with England and then Italy falling completely under American sway. Roughly 35 per cent of box office receipts usually go the French cinema, which boasts the full panoply of film magazines, a star system, multiple sequels, movie tie-ins and even theme parks. Some years blockbusters push the French film share to  45 per cent, meaning equal to US content domestically.

- Most French adults identify themselves in polls as pro-American.

Some saddening but interesting facts about teh French, DaveW -- particularly the one about the subsidzed cafes! It reminds me of Montreal's laws against staffing supermarkets to keep dépanneurs viable. Where did you get this info?