Hollywood rape: Why Polanski is getting a free ride
By Robert Jensen

Roman Polanski did not "have sex" with a thirteen year old. He raped a thirteen year old anally and vaginally after drugging her. This doesn't seem to bother much of the media who keep saying "had sex with," nor does it bother Hollywood who continued to have close ties with Polanski after the rape, even giving his film "The Pianist" an Academy Award for best picture. Now, to cap it off, some stars, including Woody Allen, have signed a letter calling for his release. What does it take to hold a celebrity male accountable for his actions?

Obviously, raping a child is not enough of a transgression, nor is physical assault on a woman. Jack Nicholson in 1996 was accused of severely beating a prostitute he had just had sex with. This was front page in the British newspapers but hardly got a mention in the American press. A year later Nicholson won the Academy Award for best actor.

There are most likely multiple reasons why Polanski is being given such soft treatment by the press and his Hollywood buddies, but I would bet that some of this has to do with how our society sexualizes girls. (...)

The article appears to be by Gail Dines, not Robert Jensen, but it's kinda hard to tell...

I think you are right. They work together and Jensen apparently lent her his blog for that comment. I wrote the web site to protest the ambiguity.

Could a mod change the thread title to Gail Dines on..., please?

This was the proposition put forward by the Centre d'aide et de lutte contre les agressions à caractère sexuel (CALACS) de Rimouski that a whole bunch of babblers [url=http://www.rabble.ca/babble/feminism/status-chattel]in this thread[/url] denounced as blaming women for the violence done to them.

Reading Dines' essay convinces me even more that she - and the Rimouski women - interpret hypersexualization not as any female behaviour we could blame women for but as an active social process whereby advertisers and other cultural producers create and impose an ethos through images, songs, fashions, etc. This is laden onto consumers of these products, some of them being the men that sexually assault women on the basis of culturally-induced expectations. I thought this was clear after reading the Rimouski project definition - which I translated for that purpose - and that we had a consensus to that effect by the end of the thread of reference.

I didn't see any consensus in that thread.

Well, I just reread it in full and I didn't see any "whole bunch of babblers" arguing that the Rimouski project proposition was blaming women so why not call it even; good enough?

There were certainly enough to keep you busy fending them off. One of them even ended up refusing to speak to you any more. And another was a moderator.

Let's just let this thread go where it will, without dredging up fights from past threads.  I just re-read the one linked to, and I can't imagine what purpose it serves to rehash a polarized, angry fight now.

Think this is a mischaracterization of the thread in question, and what the issue was, that prompted the not speaking.

All the men participating in that thread made it quite icky though, and the attacks upon women by men were even worse. That was the feminist forum and yet the men in there had the audacity to  nitpick at women,  and outright dismiss their observations, if not personally attack them.

It is a fine example of why many women refuse to post at babble and have left. And of course also as a building block of bad feelings and resentments that later play out in other areas.

Oh cross posted with Michelle, I was reading while she was posting, and I concur with her statements.

[url=http://www.theatlantic.com/doc/200910u/gore-vidal#at] Gore Vidal proves he is a complete asshole: [/url]

In September, director Roman Polanski was arrested in Switzerland for leaving the U.S. in 1978 before being sentenced to prison for raping a 13-year-old girl at Jack Nicholson's house in Hollywood. During the time of the original incident, you were working in the industry, and you and Polanski had a common friend in theater critic and producer Kenneth Tynan. So what's your take on Polanski, this many years later?

I really don't give a fuck. Look, am I going to sit and weep every time a young hooker feels as though she's been taken advantage of?

I've certainly never heard that take on the story before.

First, I was in the middle of all that. Back then, we all were. Everybody knew everybody else. There was a totally different story at the time that doesn't resemble anything that we're now being told.

What do you mean?

The media can't get anything straight. Plus, there's usually an anti-Semitic and anti-fag thing going on with the press - lots of crazy things. The idea that this girl was in her communion dress, a little angel all in white, being raped by this awful Jew, Polacko - that's what people were calling him - well, the story is totally different now from what it was then.

See how our culture's luminaries maintain unaccountability for their violence against common folks (a model enthroned into its values by DAF de Sade, who also drugged, tortured, raped and killed peasant women): dismiss a 13-yr old drugged rape victim as a "hooker" (cold comfort for those who count on civil libertarians' respect for "sex workers"), and exploit anti-racist and anti-homophobia sentiments when it is convenient to play those cards to protect themselves. Like most North American writers, Vidal is deeply compromised by its alliances with the pornography publishing industry (He received millions for scripting Bob Guccione's Caligula) and can never be expected to say an unkind word against rapists. 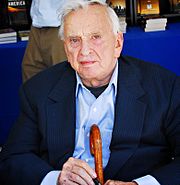 I hope that people are starting to take note of which "civil libertarians" and "artists" are choosing to side with pimps and rapists.

Debating the use of the term hypersexualization and the federal government policy for funding anti-rape activity is fine with me.  Trashing the name and work of a frontline women's group where workers may or may not speak your language, probably were unaware of your flip judgements and have a need to protect their public reputation and work to make a better world is pathetic arguement

This is a member group of the Canadian Association of Sexual Assault Centers and you are out of line.  Progressive? Not much

(gore vidal) I really don't give a fuck. Look, am I going to sit and weep every time a young hooker feels as though she's been taken advantage of?

And this was a 13 year old girl who was raped vaginally and anally while she begged to be released. It is not just how shocking the statement is, but rather how free he feels to express the thought openly, even after the widespread public condemnation of Polanski and supporters.  There is a culture of entitlement men with power hold fast to. Imagine if this little girl had been an adult. What protection would she have had to say "no"?  Would she maintain the right to say "no" to vaginal intercourse? Would she maintain the right to say "no" to sodomy?  I say this wouldn't even be a whisper in the news if the victim had been an adult woman.

Once a man labels a woman "hooker" she enters into a state of being that once entered deprives women of the right to consent or decline.

Imagine if this young girl had actually been a "hooker". In the mind of the buyer, the woman has given up her agency. In the eyes of the law, the onus falls on the woman to prove she did not consent. Rape is hard enough to prove without having sold access to one's vagina.

Has there ever been a case worldwide where a prostitute has managed to get a man convicted of rape?

martin: I did not know that Vidal helped write Caligula. I have never been able to finish that movie. It was seriously one of the weirdest and most f*cked up things I have ever seen (of what I did see).

I agree with the power thing. The attitude seems to be "just who do these girls and women are to think that they should not be sexually available when we want them to be?"

On Wednesday, the Swiss Federal Criminal Court accepted Polanski's [4.5 million pound] bail plea and his offer to surrender his passport.

The court said Polanski would be subjected to "constant electronic surveillance" at his chalet and an electronic tag would be activated if he attempted to leave the premises.

It also said that Polanski - who holds dual French and Polish citizenship - would stay in the prison pending a possible appeal against the ruling.

The Swiss justice ministry has 10 days to appeal against the court's decision.

But Justice Minister Eveline Widmer-Schlumpf said she saw no reason to appeal against the decision.

It is highly unusual for extradition subjects to be granted bail in Switzerland, says the BBC's Imogen Foulkes, adding that Polanski's first application was refused.