So, Canada has announced that it will ‘support' the UN Declaration. Is it time to celebrate yet? What does that even mean? 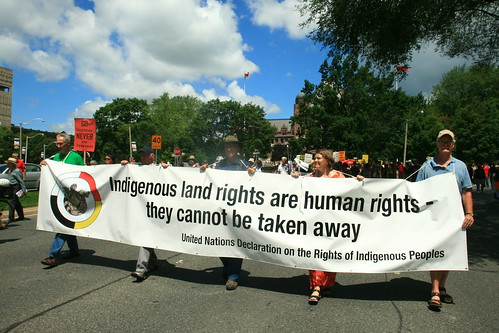 Let's take a closer look. First off, they announced this on a Friday afternoon, right after they announced major plans with the Afghanistan war, burying the story. Second, the announcement came as a press release posted online - no press conference where people could ask clarifying questions, no informing Indigenous Peoples, just a passive admission on a website.

To really understand it underneath all the incredible praise the government has for itself, you have to look at the operative paragraph in their statement: "We are now confident that Canada can interpret the principles expressed in the Declaration in a manner that is consistent with our Constitution and legal framework." 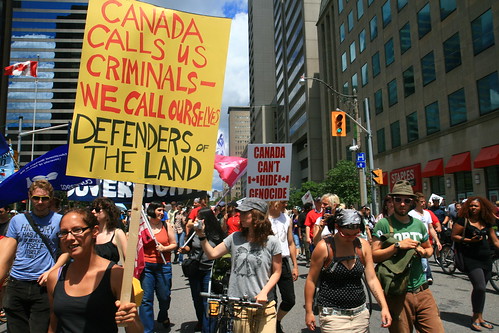 Without over-analyzing the semantics, this seems to echo their repeated statements in international fora and domestically, in which they claim the UNDRIP must fall under domestic law. This is a slight change, they're not saying ‘subject to' domestic law, but rather ‘consistent with' and using ‘legal framework' instead of ‘legislation'. These may be minor improvements, but it remains up to the courts to really oversee, and still seems to be saying that they are confident they can interpret the UNDRIP to not mean anything more substantial than the constitution and existing laws. Which are the source of the problem in the first place, and not things that could ever be rectified with a full reading of the UNDRIP.

In their statement, they state that they still disagree with the right to Free Prior and Informed Consent, one of the most crucial aspects of the Declaration. If they aren't willing to consider FPIC, as it is known, then they are essentially saying that Indigenous communities still don't have the right to stand up against projects and policies that could be damaging. Which has basically been the source of most major conflicts in recent times - Oka, Sharbot Lake, the Tar Sands, etc.

So to me and others, this seems more like a public relations move, so they can check something off (think Quebec's 'distinc society' status) while attempting to countervent any effectual changes, but many of us have been saying it would be better to have another (non-Conservative) government endorse the UNDRIP unconditionally instead of supporting only insofar as it is consistent with their interpretation of it. It also betrays their recent actions in the UN Convention on Biological Diversity Conference in Nagoya, Japan, as the only party opposing Indigenous rights. 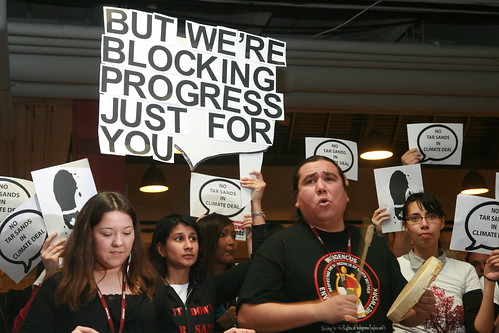 The upcoming climate negotiations however will be the real testing ground over whether Canada will live up to its word and respect Indigenous rights. Myself and others will be there to see if Canada has finally embarked on what would be a new stage in relations.